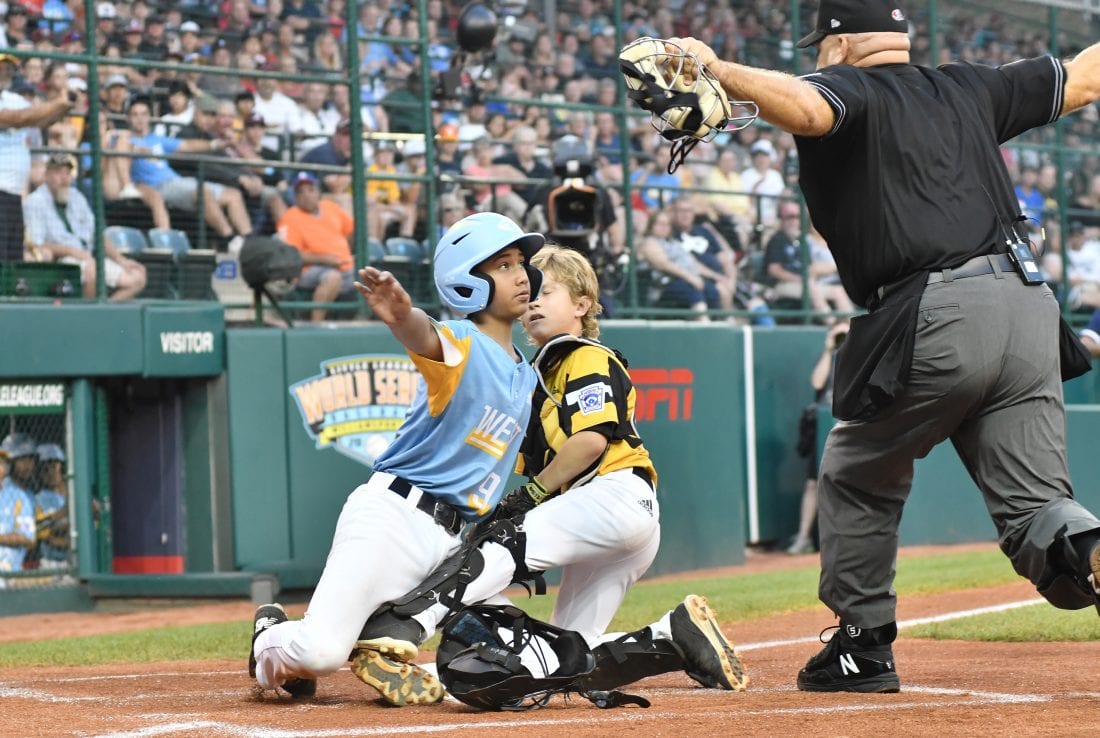 A closer look at the Wailuku, Hawaii’s 12-9 win over South Riding, Virginia, on Wednesday at Lamade Stadium as Hawaii earned a spot in Saturday’s U.S. championship game.

PLAY OF THE GAME: Kaleb Mathias’s timely fourth-inning RBI single — Never underestimate the value of hustle, heart and determination. Virginia had erased a six-run deficit an inning earlier and was an out from having a shot at taking the lead in the bottom of the fourth with a runner on second and two outs. Mathias hit a slow bouncer toward second that looked like a sure out. Instead, he exploded out of the batter’s box, ran as fast as he possibly could and beat the throw to first by a step. A batter later, Shiloh Gilliand (2 for 3, 3 RBIs) hit a pinch-hit RBI single that gave Hawaii the lead and momentum back as it started taking over the game again. Take away Mathias’s hustle and this game’s entire complexion might have changed.

VIRGINIA PLAYER OF THE GAME: Colton Hicks — He is just 11, but Hicks has emerged as one of the premier players at this year’s Series. He played an outstanding game last night, going 2 for 3 with a triple and three RBIs. Hicks drove in a run in each of his three at-bats. He hit an RBI triple in the first inning and an RBI single in the third as Virginia made its furious comeback and tied the game, 8-8.

HAWAII PLAYER OF THE GAME: Isaac Imamura – An ideal leadoff hitter, Imamura reached base in each of his five at-bats, going 2 for 2 with three walks and two runs. He ignited a five-run first inning eruption and his single helped highlight a three-run fifth-inning rally that helped Hawaii pick up some valuable insurance runs and go up four. Imamura was a big part of a balanced offense that produced 13 hits from nine different players against a team that had thrown no-hitters in its first two Series games.

BEST EFFORT: Virginia’s comeback — Pitcher Bransyn Hong earns an honorable mention after leaving the bases loaded with a powerful hitter up in the fifth inning and keeping Hawaii up, 12-8. Virginia, however, earns this spot after scoring six runs in the third inning and shockingly tying a team that had outscored its first two Series opponents, 11-2. Virginia delivered five hits in the inning with Hicks, Noah Culpepper and Chase Triplett hitting RBI singles. The firepower Virginia showed during that comeback is a reminder about why it remains dangerous moving forward.

FLASHING LEATHER: Hawaii pitcher Kaedyn Miyake-Matsubayashi knocked down a Justin Lee rocket-like grounder in the first inning and nearly turned it into a double play. Miyake-Matsubayashi’s quick reactions helped him keep the ball in front of him and he made a quick throw to second for a forceout. Ultimately, that play saved a run because Colton Hicks hit an RBI triple a batter later. Hawaii second baseman Isaac Imamura quickly moved to his right and stopped a well-hit Joe Ross ball headed toward center field. He also made a snap throw that beat the speedy Ross to first. Nicholas Nashiwa moved to second base later in the game and made a spectacular play that saved at least one run and maybe two. Nashiwa burst to his right, extended his glove as high as it could go and snared a rocket line drive hit by Chase Obstgarten, keeping Hawaii in front, 12-8. Virginia third baseman Brady Yates displayed his upward skills an inning later, going up high and catching what looked like might be a Hong line drive single. Hong exacted a measure of revenge in the sixth inning, diving off the mound and stopping Chase Triplett’s grounder. He had trouble getting a throw off to first and bobbled the ball, but Hong stayed composed and made a good throw that beat Triplett by a step and prevented Virginia from having two runners on with no outs.

WHAT THE ADULTS SAY: “We’ve been stressing with the kids and saying ‘two no-hitters, guys.’ Let’s embrace this challenge and at practice we just kept working on making contact and their mental approach,” Hawaii manager Brad Long said. “It worked out really well for them. They had a really good showing at the plate today. We’re very happy about that.”

WHAT THE KIDS SAY: “Before the game coach told me to come in and be ready to come in any time,” said Hong after throwing 3 1/3 brilliant innings of one-hit baseball in relief while earning the win. “After hearing that, I was worrying the whole game about pitching.”

WHAT IT MEANS: Hawaii is headed to Saturday’s U.S. final. The West champions are the fifth straight Series qualifier from Hawaii to reach the national championship and are a victory from extending the state’s world final appearance streak to five. Virginia is hoping to earn a rematch against Hawaii in that U.S. Championship. It faces Louisiana tonight, back at Lamade Stadium with the winner facing Hawaii Saturday.