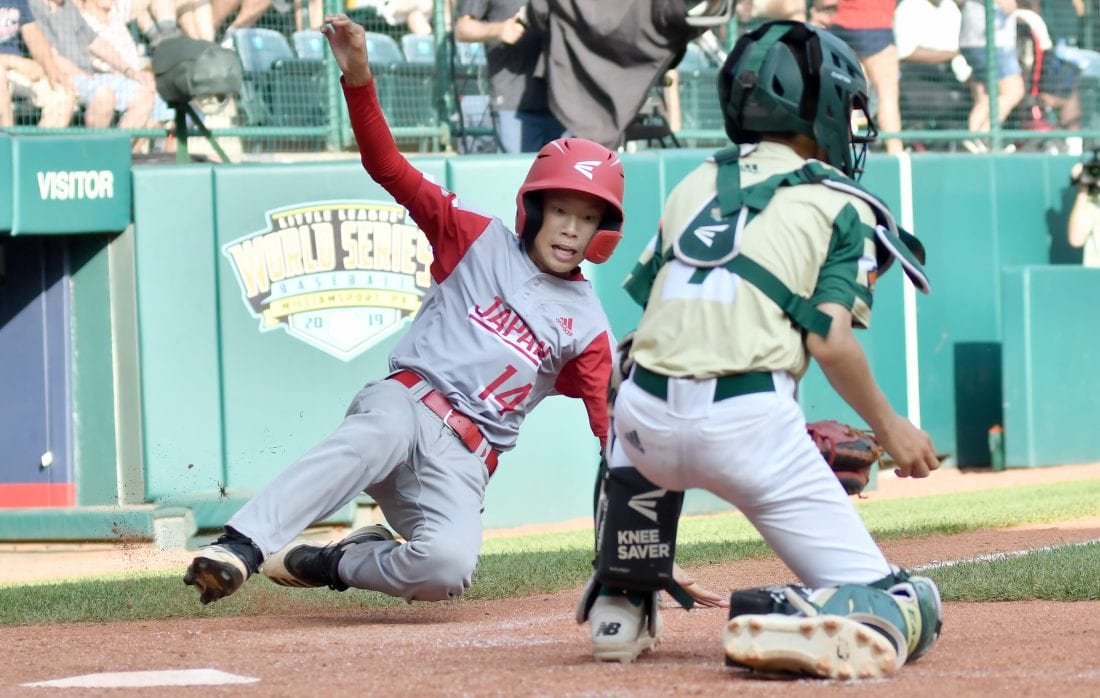 MARK NANCE/Sun-Gazette Japan’s Ritsu Nishikawa scores on a single by Taishi Kawaguchi in the fifth inning at Lamade Stadium on Wednesday in a winners’ bracket game. Japan won to advance to Saturday’s International championship game.

PLAY OF THE GAME: Yuto Kakeba’s two-run double — The 5-foot-6 182-pound left fielder continued his torrid Series. Kakeba lined a double to the right field wall, scoring two runs to break a tied game in the bottom of the third. In three Series games, the No. 4 hitter is 7 for 9 with eight RBIs and four runs.

ASIA-PACIFIC PLAYER OF THE GAME: Jinwon Na — South Korea’s lead off hitter got the Asia-Pacific champions off to a hot start with his solo home run. The run was the first Japan gave up all Series and Na’s booming blast gave South Korea some momentum and hope.

JAPAN PLAYER OF THE GAME: Yuto Misaki — The relief pitcher came in the 3rd inning and held South Korea to just one hit the rest of the way. He didn’t allow a baserunner to reach second as he struck out three and walked just one in 3 1/3 innings of work on just 38 pitches. Misaki also went 1 for 2 at the plate with a run scored.

In 5 1/3 innings on the mound in the Series, Misaki has yet to allow a run and has only allowed one hit.

BIG INNING: Japan had a two-run inning three different times but it was its third inning two-run burst that pushed it over the top. After South Korea tied the game in the top of the second, Japan came back with two go-ahead runs in the bottom of the third. Jo Nishizawa led off with a single and Ryu Shinna followed with a walk. After a lineout, Yuto Kakeba laced a two-run double to deep right field. The two-run lead was all Japan needed with Yuto Misaki on the mound. Japan also scored two runs in the first and fifth innings.

BEST EFFORT: After a 33-minute delay for lightning, which nobody in the stands seemed to see, Japan relief pitcher Yuto Misaki came back in the top of the fifth and on six pitches, got the first two batters to strike out looking. He then earned the final out with a 4-3 groundout. The righthander could’ve easily been tight coming back in after a lengthy delay, but he kept a dangerous South Korea lineup off balance and allowed Japan to hold a three-run advantage heading into later innings.

FLASHING LEATHER: South Korea’s Wongyu Son highlighted his team’s usually consistent defense with back-to-back impressive, non-routine plays. The first baseman saved two hits to left field, first with a backhanded stop down the foul line that prevented the screaming ball from reaching the wall. His next grab was just as impressive as the 5-foot-2, 125-pounder used all his reach, and then some, to snag the blazing ball out of the air and prevent a second hit in the bottom of the second.

South Korea shortstop Minwood Park, scooped up a racing grounder up the middle, spun around and fired a perfect throw to first base to start the bottom of the third. The play still resulted in a single as Jo Nishizawa was barely safe, but it was just another example of great defense, whether it resulted in an out or not, at the Series.

After two of the first three Japan batters reached base in the top of the fourth, South Korea pitcher Suho Yang got himself out of his own two runners on, one-out jam when he calmly and smartly started a 1-5-6 inning-ending double play to keep South Korea within two runs.

HOME RUNS: South Korea’s Jinwon Na led off the game with his second home run of the Series when he launched a 1-2 pitch about 245 feet over the second wall at Lamade Stadium. The loud reverberation of the aluminum bat clanged throughout the complex as the South Korea celebrated its early 1-0 lead with a Usain Bolt-like flex show.

In the top of the second, South Korea’s Gibeom Jung belted his first home run in Williamsport to centerfield that barely cleared the fence and even made its way back onto the field. The nearly 230-foot shot tied the game after Japan took the lead in the bottom of the first with two runs.

WHAT THE ADULTS SAY: “We are confident we can win (today’s) game and we know their style and how they hit and how they pitch. I think we can have a great game (today),” South Korea manager Minho Lee said through an interpreter about facing Curacao for the second time.

WHAT THE KIDS SAY: “We gave up that early home run and we were behind. It was our turn to hit and we tried our best to get back ahead,” Japan’s Daiki Kobari said through an interpreter.