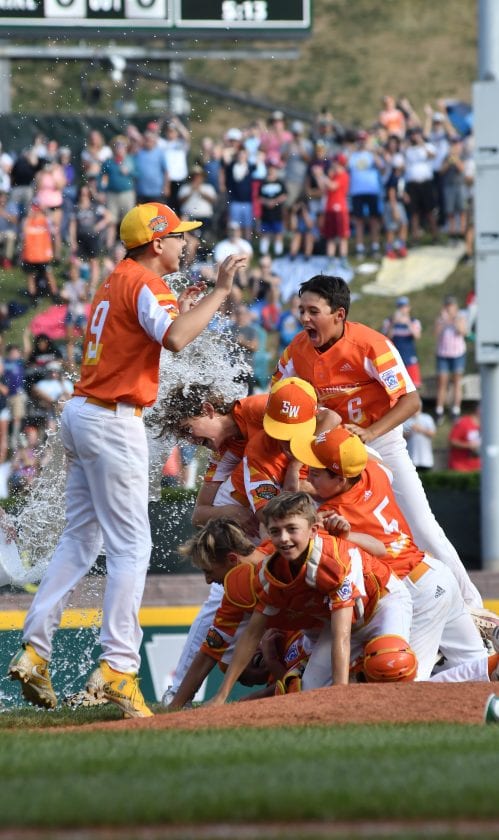 MARK NANCE/Sun-Gazette Louisiana plays celebrate with one another moments after defeating Curacao to win the Little League World Series championship at Lamade Sadium on Sunday afternoon. It’s the first world championship for the state of Louisiana.

River Ridge, Louisiana, players never said much as they kept winning and beating the best teams the world could offer.

But one by one they kept checking off goals. A state championship, becoming the first New Orleans team to ever reach the Little League World Series, winning a U.S. title. Fun and hard-working, this team stayed humble. It spoke quietly but carried mighty powerful sticks, arms and gloves.

And when shortstop Stan Wiltz snared the final out and players dogpiled on the Lamade Stadium infield grass, there was nothing left to say. This team’s performance had said everything.

The Eastbank All-Stars from River Ridge, Louisiana are Little League Baseball’s best teams. And they left no doubt.

River Ridge, a New Orleans suburb, became both the first Louisiana team to win the world championship, the first Southwest Regional champion to do so and also the first Series team to take the title after losing its initial game since Venezuela in 2000.

“These tournaments started with approximately 7,700 teams and here we are, we’re the best out of anybody. That’s the part of the process I can’t comprehend,” Louisiana manager Scott Frazier said. “We’re the best in the world out of 7,700 teams that started this thing. It’s been unbelievable.”

Louisiana lost its only game this summer when Hawaii defeated it, 5-2. But the new world champions thundered back, outscoring their next six opponents, including Hawaii, 42-6.

Dominant offense, brilliant pitching, scintillating defense … this team had it all. All 13 players made large impacts throughout the Series.

Throw out the beads, heat up the gumbo and start Mardi Gras early. New Orleans, your team is a world champion and is bringing home quite a big title banner.

“It came down to all 13 kids buying in and they’re families buying in because you’re going to have kids that have certain roles and sometimes those roles might be getting to bat one time a game. I grabbed some guys in the dugout in the sixth inning, Peyton Spadoni, Jeffrey Curtis and Alton Shorts and told them if it wasn’t for you three guys buying into the team concept we would have never made it here,” Frazier said. “If it wasn’t for that we would have never accomplished what we accomplished. Those guys have done a phenomenal job when called upon of coming in and getting hits for us because they kept the right mental approach to the game. Our success is based on those guys buying in and the families buying in. This truly was a team win because if you don’t have all those components coming together we have no shot to be successful.”

The world title banner was presented a few minutes later before the players took the lap of a lifetime, running around Lamade Stadium. As that happened here, fireworks shot off in New Orleans and River Ridge. This team has pushed the New Orleans Saints off the front page and the Super Dome where the Saints play was painted orange and yellow Saturday. The Saints, LSU and the Louisiana governor all will be welcoming Louisiana in the coming months and the airport likely will be jammed when this team arrives back home at 2:37 p.m. Monday.

“It was a great feeling to be able to make the last out, especially in both the championships,” Wiltz said. “I felt like my glove was a magnet and the ball just went in it every time. When it was hit to me I was just thinking go get it and catch it. You’ve got this.”

His entire team had this tournament after dropping its first Series game.

Louisiana kept getting stronger as the Series progressed and the games grew more tense. It was not an accident either. This was a team as loose as it was talented and deep. Frazier and his coaches let the players have fun throughout this entire run while soaking in the entire Series experience. That included playing a game of touch football instead of practicing extra last Friday.

A calm Louisiana team was a dominant one and that showed again yesterday. Prather was untouchable, Roussel and Louque near impossible to retire again and every player did his part. This was a recipe as familiar as crawlfish and that blend overwhelmed a fabulous Curacao team that reached the final for the first time since 2005.

Roussel capped his historic Series with two more doubles, and RBI and three runs. He shattered the tournament’s previous record for hits (14) and finished 17 for 23 with a grand slam, 10 RBIs and 12 runs. His RBI double sparked a game-breaking four-run rally as Louisiana took a 6-0 lead.

“The ball was looking like a beach ball when I went up there,” Roussel said. “I had so much confidence going up to the plate.”

“I think they’re should be an asterisk next to that 17 hits because this is 17 with the new bats,” Frazier said. “Let’s put that in perspective because a lot of the hits he would have had probably would have been home runs (with the old bats). The game has changed so it makes the feat even more remarkable.”

Louque was as hot as Roussel over the last three games and these two hitting back to back in the lineup had opponents feeling like they were going against Willie Mays and Hank Aaron in their primes. Both set Series records with seven doubles and Louque put Louisiana ahead to stay with a first-inning RBI double. He hit another RBI double in the third that made it 2-0 and capped his performance with an RBI single, giving Louisiana a 4-0 advantage.

Over his last three games, Louque threw a no-hitter and went 6 for 6 with four doubles, a triple and seven RBIs.

“I felt good because I knew if I just hit the ball I could help the team out to win this,” Louque said.

Curacao hung around for four innings, but the four-run fifth inning dealt this resilient team that had won four straight elimination games a knockout blow. Any deficit against Prather seemed daunting and being down six was like being on the ground and staring up at Mount Everest.

Prather picked up where he left off following a dazzling outing against New Jersey. He brilliantly mixed his pitches, kept Curacao off balance and struck out six, growing stronger as the game progressed. Over his last two games, Prather allowed just one run, three hits and struck out a U.S.-high 16 batters in 11 1/3 masterful innings.

“It makes my job really easy calling pitches when they can execute the pitches. Egan has always done that and all our guys have always done that,” Frazier said. “Everything worked for him today. His changeup was outstanding. Those guys were guessing so we just kept them on their heels the whole time. He did a phenomenal job mixing it up and keeping his pitch count down. Those guys are dangerous and can really swing the bats. Two hits against those guys? That’s crazy.”

The one time Curacao mounted a threat, Prather maintained his composure and quickly stifled it. Trailing 2-0 in the third inning, Curacao loaded the bases with one out. Prather then induced a grounder to Louque at third base and he threw home for a forceout. Catcher Ryder Planchard then cut down a runner at third trying to advance on a wild pitch and the crisis was averted.

Backed by a flawless defense that made no errors, Prather retired the last 10 batters he faced and never buckled when Martha hit eight two-strike foul balls, recording the final out on his 87th pitch.

“I was just trying to get outs. That’s all I was trying to do,” Prather said. “Once I got out of it (the third-inning jam) I knew I was settled in.”

The entire team appeared settled in over the last four games, pummeling Virginia, Hawaii and Curacao, scoring 27 runs and collecting 35 hits in those games. The offense was as balanced as it was potent and Louisiana again broke open a close game late.

The world champions belted four hits in the four-run fifth inning while building a 6-0 advantage. Gavin Berry singled, stole second and scored on Ryan Darrah’s RBI single. Darrah then scored on a wild pitch and helped highlight a two-run sixth inning when he hit a two-out RBI single that capped the scoring and putting an exclamation point on this remarkable run.

Now this team is frozen in time together. These players and coaches will forever walk together as champions and be the first in state history to capture a world title.

And in 2019, nobody played better Little League Baseball than River Ridge, Louisiana.