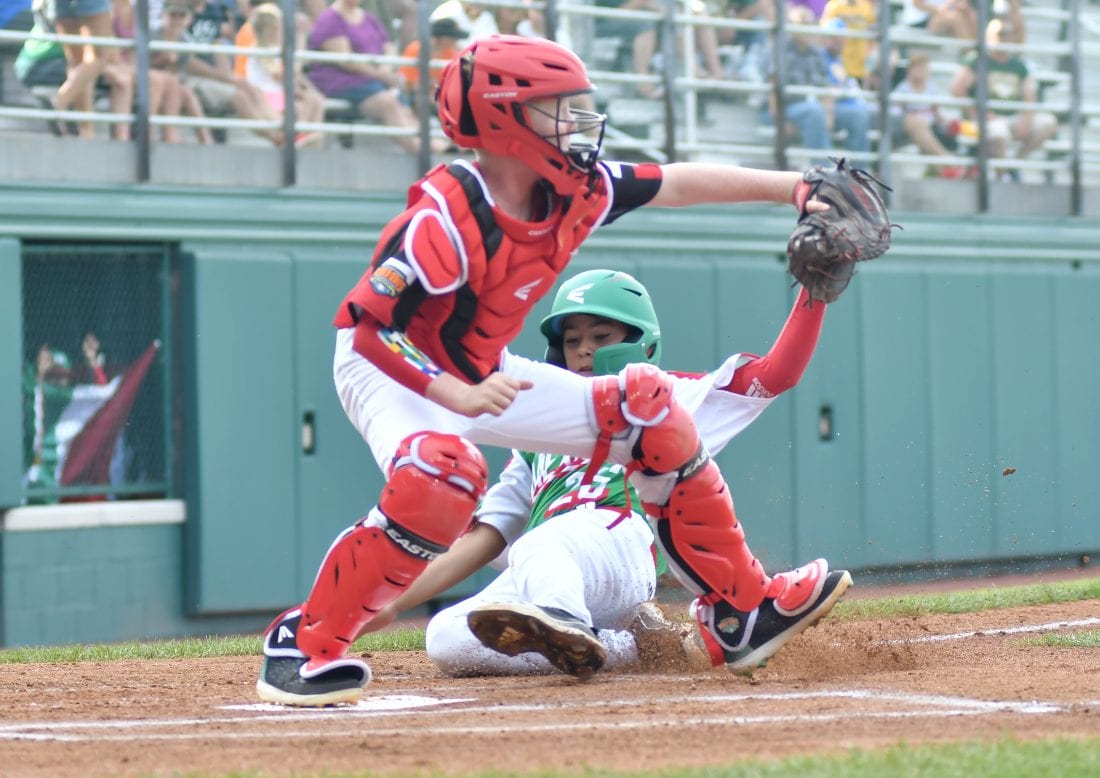 PLAY OF THE GAME: The game could have gotten out of hand early for Canada, but the right arm of starting pitcher Matt Shanley wouldn’t allow it to. He loaded the bases on three walks in the first inning, but fielded a comebacker to get the force out at home. Then he finished off the first inning with likely the biggest of his seven strikeouts of the day. He caught opposing pitcher Santiago Leija staring at strike three to strand the bases loaded in the top of the first inning.

MEXICO PLAYER OF THE GAME: When Mexico saw runs were going to be tough to come by, it resorted to playing some small ball to get some runs. The rest, well they left that up to Leija. The right-hander who prepared for each at-bat by crossing himself behind the mound had not just control, but command of every pitch he threw. Fastballs painted the corners. Curveballs got hitters’ knees buckling. And most importantly, Leija was efficient. He needed just 78 pitches to finish off a two-hit shutout which included 11 strikeouts. The two hits he allowed were both on bunt singles, and he walked just one batter.

“I’m pretty proud of myself and my teammates,” Leija said. “I was just trying to do what I wanted on the mound and I knew my teammates were going to be fighting during their at-bats at home plate.”

CANADA PLAYER OF THE GAME: Canada manager Bruce Dorwart knew his team was going to be in for a challenge no matter which of the Mexican pitchers they faced. So he threw the best weapon he had right back at Mexico. Shanley overpowered the Mexican champs, who never really seemed to catch up to his fastball or figure out his crossfire delivery. The only thing they were able to do was drive up his pitch count with patience. They took three walks in the first inning, but Shanley did his best to match Leija pitch-for-pitch. He struck out seven batters in 3 1/3 innings allowing just one hit in a performance which deserves all the credit in the world.

BIG INNING: Hits? Who needs hits? Mexico surely didn’t in the top of the fifth inning. A team which hadn’t had a hit since Jesus Garza led off the third inning with a single decided to work around the issues of hits for its best inning. Elliot Sanchez walked, then went first-to-third on a sacrifice bunt when nobody covered third base. He scored when the throw to first on a bunt sailed down the right-field line allowing Ivan Sauceda to reach second. And when Angel Castillo lifted a fly ball to the warning track in center, Sauceda advanced to third and then scored when the throw to the infield got away. That gave Mexico a 3-1 lead.

BEST EFFORT: Marcelo Herrera was already drawn in at third base preparing himself for a potential bunt. Canada’s Nolan Loverin had other ideas. He slapped a pitch the other way trying to sneak it past Herrera, but Herrera made the play. He went to the ground to snag the grounder and fired to first from one knee to the second out of the sixth inning. One batter later Mexico finished off a 5-0 win over Canada.

FLASHING LEATHER: Intent on trying to record as many outs by himself as possible, Mexico starting pitcher Santiago Leija even took care of the outs that weren’t strikeouts. When he offered up a two-strike breaking ball to Canada’s Kainoah Brankovic in the bottom of the fourth inning, Brankovic sent it back through the box. Leija stuck his glove out and stopped the baseball in its tracks, then casually dropped it back on the mound as he walked toward the dugout.

HOME RUNS: This was the first International game of the Series where no home run was hit.

WHAT THE ADULTS SAY: “He was throwing hard. I think he was probably 70 or more,” Dorwart said of Leija. “We don’t face that much in Canada. Probably the hardest we see is in the 60 to 65 range. He had a lot of zip and we don’t see it. And he had a real good bender and he was buckling our kids. He threw a great game.”

WHAT THE KIDS SAY: “I’m very proud of Leija,” Mexico’s Jesus Garza said. “I have no words to describe how I feel after winning this game.”