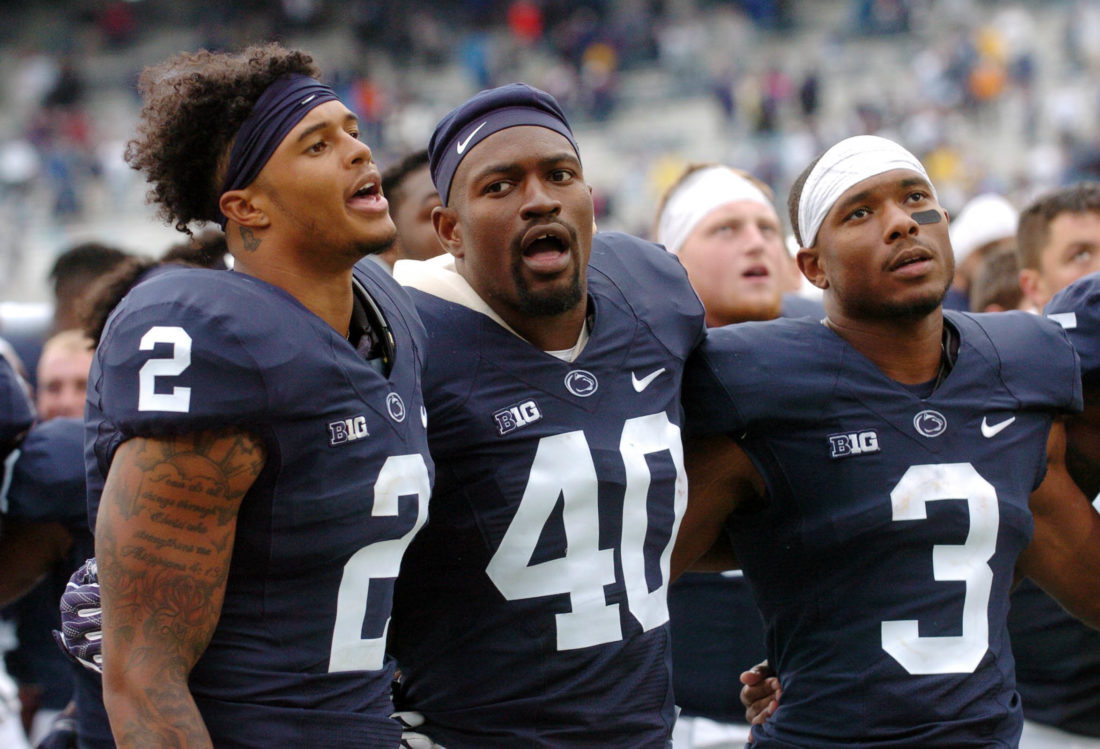 PATRICK WAKSMUNSKI/For The Sun-Gazette Singing the alma mater after the game will be a more pleasant experience for Penn State if it can beat Pittsburgh Saturday.

James Franklin gets it: Penn State vs. Pitt is a big game.

Just not for the reasons everyone else thinks.

Franklin spent a lot of time during his press conference Tuesday discussing his philosophy on how a football team needs to treat every game the same. Even if it’s a rivalry game that so many people look forward to.

Penn State, which moved up to No. 4 in the AP poll — it’s highest ranking since 2008 — will be trying to avenge last year’s 42-39 loss to Pitt at Heinz Field. That was the first meeting between the schools since 2000, and the Pan­thers not only earned bragging rights, they essentially were able to knock PSU out of the College Football Playoff.

So clearly, Franklin has had this game circled for some time. Right?

“I don’t want people to take what I’m saying the wrong way,” Franklin said. “This is the Super Bowl for us because it’s the game that we play Saturday. Last week our Super Bowl was Akron.

“So I think when I say these things, people act like I’m trying to say that the Pitt game is not a big game. It’s a huge game. It is the most important game that we have on our schedule. Last week, that was the most important game that we had on our schedule. Next week, we’ll talk about next week. But that’s just how we’re going to approach it. Always have, always will. It’s not going to change.”

The subject kept coming up from time to time Tuesday, even when Franklin brought it up himself. At one point he was asked about containing Pitt receiver Quadree Henderson, and Franklin again came back to the subject of treating this like any other game.

“I guess what I don’t understand is, are we supposed to prepare harder this week than we did last week?” he said. “I mean, if we didn’t play well, and I said, well, yeah, we didn’t prepare as hard this week because we’ve got this game next week that’s a big game, I don’t get it. I never makes sense to me.”

Franklin is adamant about keeping things the same week after week with his team when it comes to preparation. He doesn’t change what he expects from the players, or from the circumstances, regardless of the opponent.

Franklin even got a subtle dig in at Pitt coach Pat Narduzzi about the Panthers players and assistant coaches not being allowed to talk to the media this week.

There is another aspect to the whole discussion of treating every week the same.

While Franklin was doing that heading into last year’s game at Pitt, Narduzzi’s approach was to treat the PSU game like a very special one, again, going so far as to not let his players talk to the media.

It worked for the Panthers, who were much more fired up and ready to play than the Lions and built a 28-7 lead.

“I think it was early in the season,” Franklin said when asked about how last year’s game started. “We still hadn’t kind of gotten our identity. It was a hostile environment, and I think they were a talented team. You look at their roster, you look at their team last year, very talented. They were obviously able to get a win against the national championship team (Clemson), as well.”

With Saturday’s game being at Beaver Stadium, and given that Pitt won last year’s meeting, one would expect the Lions to come out much more fired up and aggressive.

“I think it left kind of a bitter taste in everyone’s mouth,” safety Troy Apke said, “but you know, last year is last year, so we’re kind of just focused on what’s going to happen this year.”

Penn State roared back and nearly won last year’s game. But a key drop by DaeSean Hamilton prevented what looked like it would be a go-ahead touchdown, and Trace McSorley later threw an interception in the end zone with PSU driving trying to take the lead.

“Something that kind of stands out is you can’t start slow in games,” McSorley said of last year’s meeting. “Obviously that slow start really crushed us, and we kind of still had to fight that bug last year a lot of times, and we were fortunate enough towards the end of the year to be able to come out and come back and win some of those games.

“But that was kind of the first game where we started off slow and then had to crawl back and fell short. I think that’s something that sticks out is if you can get a fast start, come out, be productive, get points on the board as an offense, force three-and-outs and turn­overs and chaos on the defensive side of the ball, then you’ll be much better off throughout the rest of the game and give yourself a much better chance.”