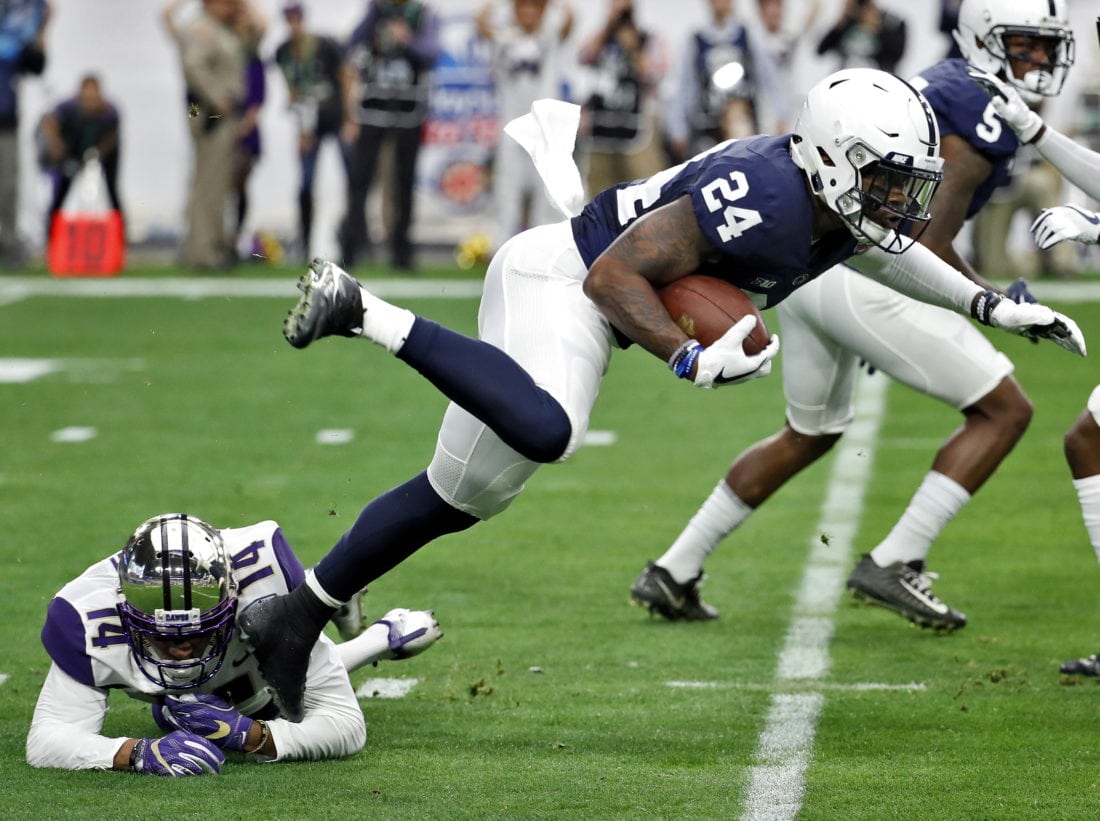 ASSOCIATED PRESS Penn State running back Miles Sanders is hit by Washington defensive back JoJo McIntosh (14) during the first half of the Fiesta Bowl in Glendale, Ariz., last December.

STATE COLLEGE – Two of the greatest running backs in Penn State history, Ki-Jana Carter and Blair Thomas, raved about Saquon Barkley, of course, and said they are excited to see Miles Sanders carry on the school’s terrific tailback tradition.

“Saquon was the man. Now it’s Miles’ turn,” Carter said Monday night during a State College Spikes event at Medlar Field at Lubrano Park. “Miles was the player of the year in Pennsylvania, was the No. 1 running back. Now he has his time to shine, so he has to take advantage of it.

“It reminds me of me when I was in college, had to sit behind Richie Anderson. But when they called my number, I took advantage of it.”

Thomas also had to wait his turn, just like Sanders, when he first arrived at Penn State, and that time was spent learning the many nuances of the game.

“I went through that same process,” Thomas said. “When I came here, D.J. Dozier was that featured running back. I was a young player, I didn’t start playing with equipment on until ninth grade. So I had a lot to learn, and I had the opportunity to sit behind D.J. Dozier, look at how he picked up the blitz.

“It’s not just running the ball. A lot of guys can run the ball. But it’s all the other facets of the position that you have to learn in order to be effective on the field.”

Sanders takes over as the starter for Penn State this year, and he should have a chance to put up big numbers in the team’s potent offense.

“I think he’s going to do well, and this offense is now giving him this opportunity to take leadership of that position and own it,” Thomas said. “He came out as a highly touted prospect, and now it’s time for him to show what he can do. I think he’s been biting at the bit to get in there. Even though he has a little different style of running than Saquon, I think he’s still going to do some great things.”

Carter and Thomas were in State College to play in a celebrity softball game on Tuesday prior to the New York-Penn League All-Star Game, hosted by the Spikes.

Carter was the No. 1 overall pick in the 1995 NFL draft following a brilliant senior season in 1994, rushing for 1,539 yards and 23 TDs for the undefeated Nittany Lions.

While both are among the best Penn State running backs ever, the widespread current opinion is that Barkley took over the No. 1 spot in recent years, before being selected with the second overall pick by the New York Giants in April.

“I always called him Lex Luger, if we remember the old WCW days — the Total Package,” Carter said. “That’s what Saquon is to me.”

Carter was able to connect with Barkley on occasion the past few years, trying to offer guidance and support.

“He was special, and he was the man,” Carter said. “I just said, ‘If you ever need anything, questions about running style, whatever it is, I’m always here for you.’ So every time I came back I’ve always talked to him. I’ve texted him after certain games, send him tweets and stuff like that, the little motivational speeches.”

Thomas believes Barkley will do “extremely well” in the modern NFL offense.

“The way the game is played now suits his style of running,” Thomas said. “He’s going to have great success as long as they keep some good support around him.

“Nowadays the game is spread out more, so you’ve got a lot of plays that are done with four receivers on the field at the same time,” Thomas elaborated. “It’s spread out, so you’re taking more guys out of the box, allowing great backs to do what they do.”

It’s fun for fans and media to discuss who was the best running back in Penn State history. Carter and Thomas both were asked if the star backs ever discuss that sort of thing themselves whenever they get together.

“I leave it up to the fans to do all that,” Carter said. “I’m just honored. I can’t believe it was 24 years ago that I played, and I’m still in the conversation, people think of me like that. I’m honored, I’m flattered.

“I had great stats,” Carter added. “My year we went undefeated, I didn’t play a lot of games in the fourth quarter, so there’s a lot of yardage that could have been left out to my career. But I wouldn’t change anything because at the end, we were the last undefeated team here, and that’s something we can hold our hat to right now.”

Thomas smiled at the question about comparing running backs from different teams and different eras and said so much goes into it all.

“Everybody has different styles, everybody had different offensive lines, different opportunities,” Thomas said. “So it’s hard. We all know that we were able to carry the torch through our tenures here, so we all appreciate each other’s craft and what they accomplished.”