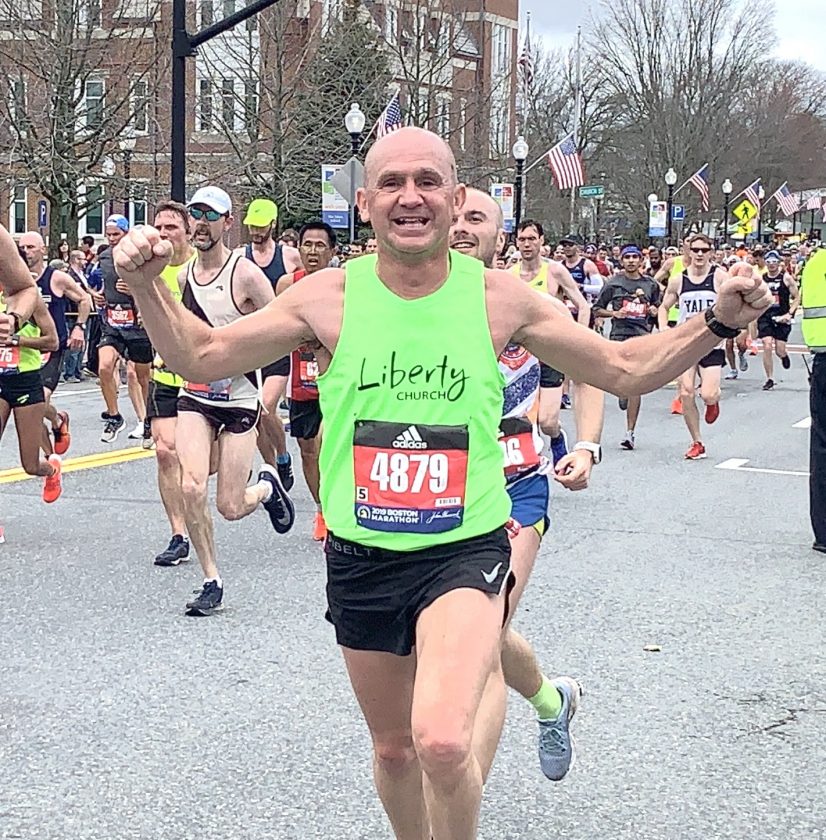 PHOTO PROVIDED Liberty’s Lon Williams, a pastor, runs during the Boston Marathon on Monday. Williams ran it in 2:59.06.

Pastor Lon Williams said that running the Boston Marathon was never really a goal of his. He didn’t set out to someday qualify and run it. He only started running four years ago to lose a little weight.

Four years later, not only is the 48-year-old pastor running 80 miles a week, but he’s run the Boston Marathon twice. And the second time running it, he did what a lot of runners hope to do by running a sub-3 hour marathon.

Williams finished the Boston Marathon on Monday with a time of 2:59.06, and while that’s an impressive finish, Williams admitted he didn’t accomplish his ultimate goal of averaging a 6:39 pace and finishing in 2:54 overall.

“Sub-3s are a pretty big deal, especially for a guy two months from being 49 years old,” Williams said. “Boston, it’s not a flat, fast course. It’s a dream-maker and it’s a dream-breaker and it’s an elevation with rolling hills. … It’s a life-changing experience to wind yourself up with the marathoners. You see how you compare to 30,000 of them.

“I guess that’s what’s unique about it compared to any other sport, football or baseball, is the average person can literally line themselves up with the best in the world and see how you compare. That’s kind of a fun, interesting thing.”

The pastor of the Liberty Church – which has locations in both Liberty and Williamsport — ran at a pace of 6:50. He crossed the half marathon mark in 1:29.14.

Williams qualified for the Boston Marathon during last year’s Boston Marathon, which weather-wise was one of the worst in the history of the 123-year race. Williams also ran a marathon in Philadelphia last November and hit a time of 2:57.

Williams, a Liberty resident who ended up coming back to the area after college and has been a pastor for 21 years, started in 4,879th place — where he lined up at the start — and finished 2,366th. He also finished 164th in his age group.

“That means I literally beat almost 2,500 people that already beat me (with qualifying times). That’s pretty amazing,” Williams said. “You’re dealing with each one of those runners who are top in their region. It was kind of a personal win for me.”

While some runners start to slow down as the marathon goes on — running 26.2 miles is far from a walk in the park — Williams admitted his best mile throughout the race was his final one.

“My last mile was actually my fastest mile, which is pretty hard to do, so I’m pleased,” Williams said.

The Liberty native has run in only five marathons in his life and competes in just two a year.

“It’s going to happen, easily next year. I’m going to do it. It’s funny because people always ask me ‘running must be easy for you.’ Every single day I have to convince myself to get out the door and take that first step,” Williams said. “This is a hard workout every single day.”