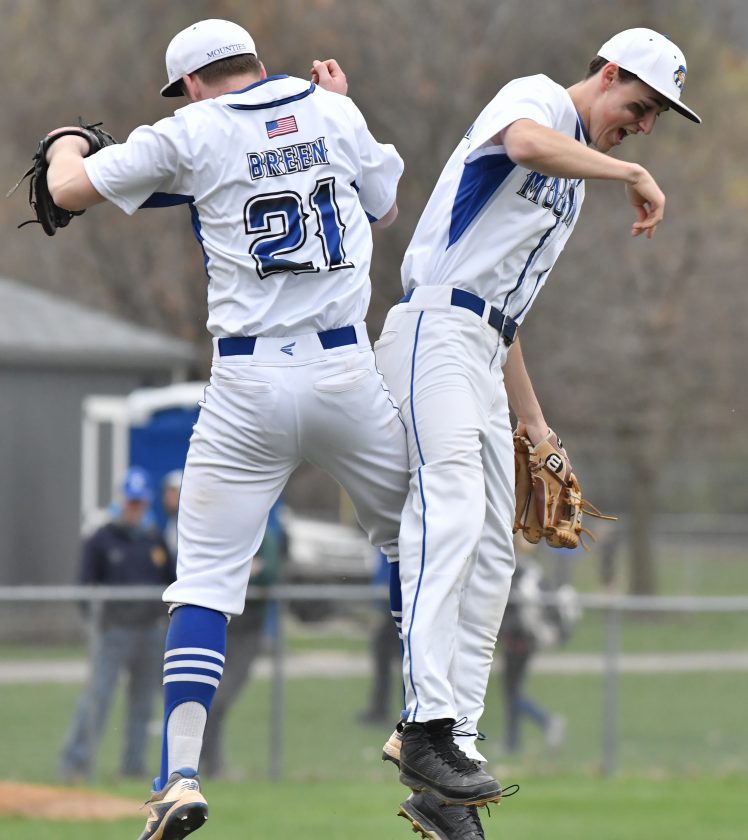 As Hughesville’s final batter called a timeout and tried breaking his focus, Tripp Breen stood motionless, hands on hips. The more time, the better. The South Williamsport pitcher stood and enjoyed the moment.

Then he owned it and put the finishing touches on his latest masterpiece.

Breen put an exclamation on a dominant six-hit complete-game, recording a game-ending strikeout as the tying run stood at third base and giving South a thrilling 2-1 victory against visiting Hughesville. Breen put out fires all afternoon, striking out 13, stranding six runners in scoring position and helping South take sole possession of first place in the HAC-III. Logan Burkett hit a go-ahead, third-inning single as South (7-1, 5-1) avenged its only loss and won its seventh straight game.

“I love that. That’s every kid’s dream. A 3-2 count, seventh inning, two outs and payoff pitch right there,” Breen said. “That’s what you work for. All the hard work and focus is for a moment like that.”

Breen worked hard all afternoon and earned a shot at the complete-game when he recorded a three-pitch strikeout and sat on 99 pitches following the second seventh-inning out. The St. Bonaventure-bound right-hander took a hard-luck loss in the 1-0 season-opening defeat at Hughesville, but would not let the Mounties lose this time, willing them to a hard-fought win in another spectacular game produced by these rivals.

Hughesville (7-2, 4-2) executed a first and third, two-out double steal with Dylon Pequignot stealing home in the second inning while taking a 1-0 lead. The Spartans would not score again despite consistently creating opportunities. Every time they rallied, Breen went into overdrive. Five times over the last six innings, Hughesville had runners in scoring position, including on third in both the sixth and seventh innings. Every time, Breen ended those threats with strikeouts, fanning the side in the seventh.

Breen won his third straight start and has struck out at least 11 in each of those starts. He also has surrendered just two earned runs in those starts and has 13 wins over the last two seasons.

“We had some hits and stole some bases and were able to put pressure on them but it comes back to their guy on the mound grinding out a good day. Kudos to them,” Hughesville coach Chris Kish said. “Every time we play it’s like this. It’s a one-run game every time. It’s outstanding baseball.”

“You just have to keep your head in games like that. You can’t let the pressure get to you. You have to stay relaxed and you have to act like you’ve been there before,” Breen said. “I have a lot of trust out there. My fielders are top of the line. I trust them. I know if the ball gets hit they’re going to get it.”

That is exactly what third baseman Landon Lorson did in the fifth inning, highlighting South’s error-less defensive performance. Clayton Poust led off that inning with a double to deep center field, but Lorson snared a hard-hit Devin Maciejewski liner that sailed toward the line. The freshman than alertly threw to Hunter Finn at second base, doubling off Poust. How huge that play was became magnified a batter later when Chase Bremigen hit what would have been a game-tying RBI single.

Breen ended that threat with his eighth strikeout. An inning later Jacob Corson hit a one-out double but was stranded at third as Breen struck out Hughesville’s Nos. 4-5 hitters.

Breen delivered a huge performance, but little things like Lorson’s play and Conner Sauers’s running also helped provide South a big win. Two innings before Lorson flashed his leather, fellow freshman Sauers flashed his speed and helped score the go-ahead run. Sauers ran in the third inning after Dom Harding hit a lead-off single. He then never broke stride on a wild pitch that reached the fence and reached third base. That sequence was a key one because Sauers easily scored a two batters later when Burkett singled into left field and gave South a 2-1 lead.

“Our baserunning really helps us a lot and Sauers won the game for us against Towanda,” South coach Smokey Stover said. “He’s been running wild.”

South also manufactured a run that tied the game in the second inning. Cole Brewer drew a lead-off walk, Nate Persun bunted him to second and Breen’s flyball to right field sent him to third. Lorson then hit a grounder that slowed on the infield grass, giving him an RBI infield single.

Nothing comes easy when Hughesville and South play and this was the third time in five games that the game was decided by one run. South struggled delivering the timely hits against Hughesville the first time, but its ability to move runners made a big difference this time as it continued its best start since 2014.

“This is huge. They’re all buying in and they’re all having fun,” Stover said. “I’m pretty loud sometimes but they understand that if we’re going to go very far in the playoffs we can’t make mistakes like that and then we work on it in practice. They’re getting used to me and they’re having a good time.”

Like Breen, Swank was at his best when there was no margin for error. In both the fifth and sixth innings, Swank left runners at third, inducing an infield pop out and recording his third strikeout. The Spartans already have won two more games than a year ago and, while disappointed they did not win, know all their goals remain there for the taking.

“It’s good, quality baseball and you learn from it,” Kish said. “We didn’t lose anything tonight. We might have lost the game, but there’s 11 games left on our schedule and hopefully we win enough games to get in and we’ll see what happens.”