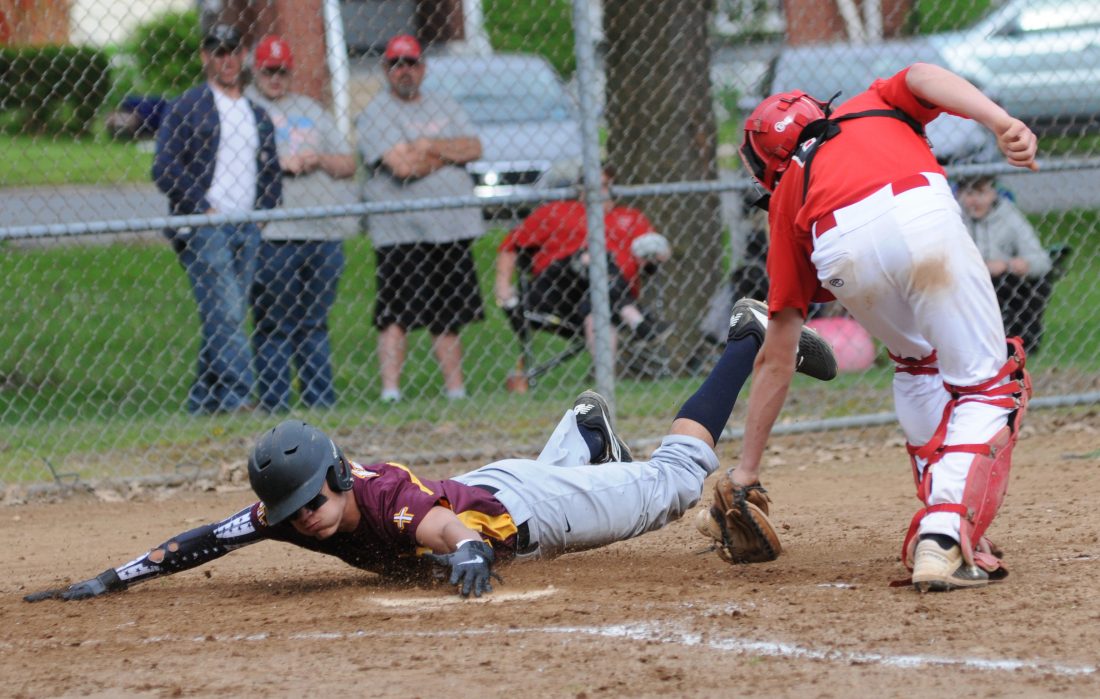 Keon Burkholder’s pitches remain as potent as they did earlier this season. Mechanics, movement and velocity still look good.

The reason the St. John Neumann sophomore has become dominant and his team has played some of the best baseball in program history the last few weeks is more a matter of trust. Burkholder was unsure of his teammates starting the year. And, really, the feeling could be shared throughout the dugout since Neumann had some new faces and features just one senior. But the trust is high now and the wins keep coming.

Burkholder was dealing again Wednesday at Brandon Park, the offense produced up and down the lineup and Neumann romped to a 16-1, four-inning win against Sullivan County. Burkholder did not allow an earned run in three innings, winning his fourth straight and also going 2 for 3 with four RBIs. Solomon Grant and Naaman Amos both reached base four times and Neumann (12-5, 9-5 Mid-Penn) tied the program-record for wins in a season while denying Sullivan (9-9, 5-7) a District 4 Class A playoff berth.

“I felt great on the mound, but toward the beginning of the season I didn’t feel good at all. My team showed me that they have my back and I felt that and I just get their energy now,” Burkholder said. “It was a matter of trusting them. When I gave up those hits today I was like, ‘they’ve got my back.’ I wasn’t worried, not even a little bit.”

“They’re trusting how we do things and why we do it. They’re trusting and buying into each other’s energy and efforts,” Neumann coach Corey Burkholder said. “That’s the main thing, trusting each other that everyone will try their hardest to do their job. Our philosophy is our plan is bigger than you and do your job. Everybody is understanding our plan is a team plan, not an individual plan and they’re buying in and they’re learning how to do their individual jobs which leads to team success.”

Neumann is having its best season ever, winning 10 of its last 12 games. The Knights showed why yesterday, playing well in all facets and scoring the last 16 runs against the only team that has beaten Mid-Penn champion Millville this season. Neumann scored three or more runs in all four innings, delivering timely hits, aggressively running the bases and taking advantage of any defensive mistake made.

Sullivan took a brief 1-0 lead in the top of the first, but Neumann thundered back, scoring five times in the bottom half and cruising from there. Eight starters reached base and Keon Burkholder and Jeff Hamilton combined for three two-run hits. Burkholder’s two-run double and Hamilton’s two-run single highlighted the five-run first inning, and Neumann scored four runs in the fourth when it put the 15-run rule into effect.

No wonder Neumann seemed so jubilant all afternoon. Then again, no matter the score that is how this team plays nearly every game. The Knights are all business, but they are having fun, too, and finding the perfect balance.

“The atmosphere is great. We’re all having fun,” Solomon Grant who reached base in all four at-bats. “We’re playing great baseball and we’re hitting the ball well. It’s just fun being here.”

Burkholder is having fun pitching and has surrendered just one earned run in his last four starts. The hard-throwing right-hander scattered two hits and struck out five in three innings against Sullivan. He has allowed only five hits in his last 15 innings while striking out 29.

Neumann led 8-1 in the third inning, but Sullivan was fighting back and loaded the bases with no outs. The trust factor was high here and Burkholder remained unfazed. He first induced a double-play back to the mound before closing his outing with his fifth strikeout. Amos struck two in the fourth inning and Neumann made quick work of a team fighting for its playoff life.

“Just trust it. The mindset was trust my brothers. That’s all it was,” Burkholder said. “Just the entire experience is great. The whole school is like family. It’s like being around your family all the time.”

Grant took multiple turns igniting that family yesterday. The junior is shining in his debut year at Neumann, consistently reaching base as the team’s leadoff hitter. He scored every time he reached base against Sullivan, stealing three bases and drawing three walks. Grant has 19 stolen bases and used his legs to produce Neumann’s first run. After walking, Grant stole second and third, coming home on an errant throw. By the time the first out was recorded that inning, Neumann already led 3-1.

Grant singled to open the second inning, stole second and came home on an Amos bunt single and Jaiden Cioffi’s RBI grounder. That fueled a three-run rally and he was involved in a four-run third-inning flurry, walking and scoring again on Burkholder’s two-out, two-run single that made it, 12-1.

“I like hitting there a lot. I’ve led off a lot in my life and it feels good contributing,” Grant said. “My mentality is if I get a single, I’m going to steal second and I’m going to steal third and then I’m going to have the second or third batters hit me in and we’re going to get a run.”

Grant has several strong hitters behind him and Neumann has scored at least five runs in five of its last six games. No. 9 hitter Josiah Reid has been a consistent run producer and helped end the game in four innings, slamming a fourth-inning RBI double.

No one player is doing the heavy lifting here. Neumann is playoff-bound in consecutive seasons for the first time and the trust bond continues growing stronger.