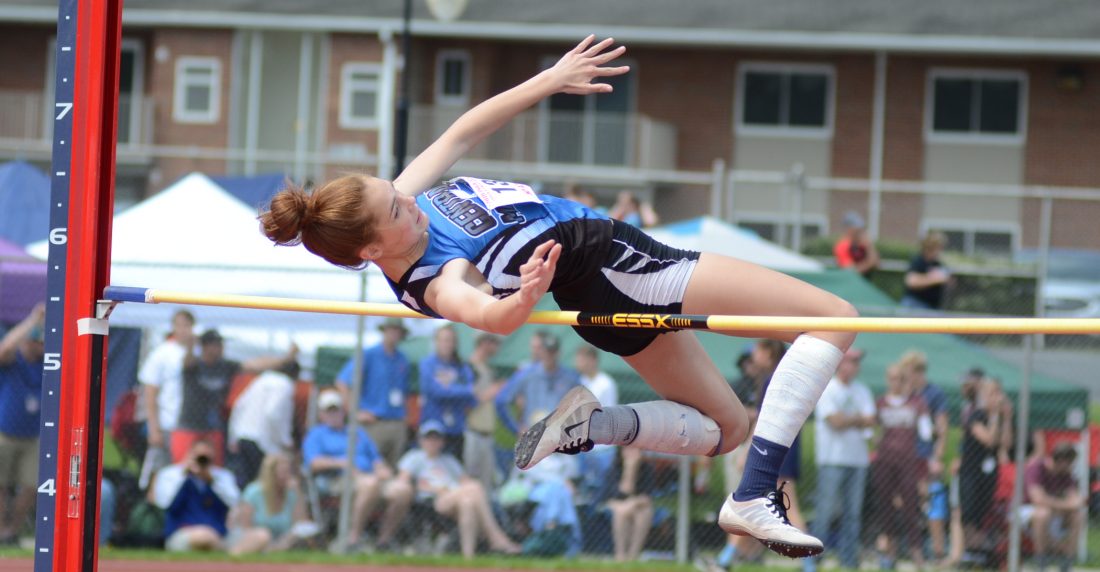 SHIPPENSBURG — It took just one jump at 5 feet, 4 inches for Amelia McCloy to know it was going to be a PR kind of day in the high jump. There was something about that jump which showed the Central Mountain junior she had an opportunity to do something special on the final day of the PIAA track and field championships.

McCloy’s intuition was right. She hit the best jump of her career, clearing 5-8 to finish in second place in the Class AAA high jump at Seth Grove Stadium. It took Palisades’ Lydia Bottelier setting a PIAA meet record with a jump of 5-11 1/2 to beat McCloy in her second consecutive state meet.

For Bottelier, it was her third consecutive state championship in the AAA high jump. As a junior, she’ll have an opportunity to win her fourth next year.

But finishing second to that kind of performance couldn’t dampen the excitement McCloy had about hitting her best jump at the best possible time.

“You can’t see it, but you can feel it when you know you have inches above the bar to go even higher,” McCloy said. “It was a good second-place finish for me. Lydia broke the PIAA record and that’s insane. It was a good day for everybody.”

The competition was fierce as 13 girls cleared 5-4, and seven of those jumpers cleared 5-6. But through the whole competition, McCloy felt comfortable. She was as clean as could be through the lower heights, and he pushed her opponents by quickly getting over later heights.

She spent most of the competition either standing or sitting and watching others deal with the pressures of missing once or twice at certain heights. McCloy, who battles anxiety at times during competition, said she felt comfortable in the setting of the state meet because she knew she wasn’t expected to win the competition.

She was a returning state fifth-place finisher, but didn’t quite have the credentials of someone like Bottelier who already has two state gold medals in the event. So knowing she wasn’t the one on which all eyes would be fixed, McCloy was loose as could be for the competition. Being the favorite in an event is often what gives her the anxiety she battles.

But she quietly went about her business. She ignored the atmosphere in order to maintain the confidence she needed to clear the lower heights which tripped her up a year ago.

“There was just something about (Saturday),” McCloy said. “I said ‘you want it, so go get it.’ Usually I sit there and I’m like ‘you might miss this.’ I didn’t let myself have those thoughts.”

And McCloy jumped like there was never a doubt in her mind. She soared over the bar with picture-perfect form. She elevated with ease, and she, along with Bottelier, laid down a gauntlet and dared the rest of the field to come get them.

When she cleared 5-8, she established a school record, breaking the 5-7 mark she set earlier this season at the Lock Haven High School Classic in late April. She made a run at 5-9, the first time she’s ever tried to clear the height, and nearly did it on her first attempt.

“Any first try at a height is terrifying,” McCloy said. “So the fact that I was able to get up that high instead of just running into the bar was a step in the right direction for me. Now I’m excited already for next year.”