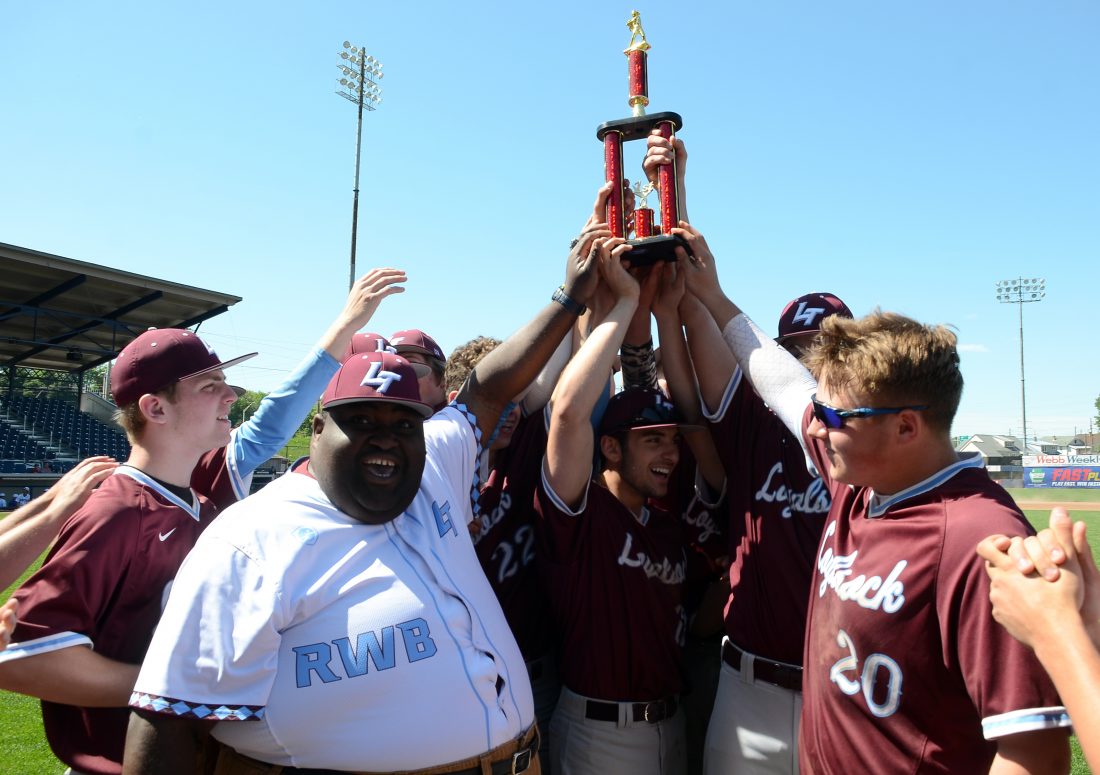 Loyalsock entered the Backyard Brawl as the tournament underdog.

It left as the champion.

While the three other teams entered with impressive records, Loyalsock brought a .500 record into the Brawl. But the Lancers knew what others might not have. They understood how potent they were and a day after rallying past defending champion Montoursville the Lancers proved it again, delivering a complete performance against HAC-III champion South Williamsport.

“A lot of teams don’t think of us as being a problem, but we’ll surprise a few people here and there and catch them off guard,” Armson said. “We caught Montoursville off guard and I think we caught South a little off guard, too.”

“Coming into the tournament we were .500 and we didn’t even know if we were going to make the playoffs. We’re leaving it with the tournament championship and a spot in districts so it feels really good,” Schluter said. “The whole season we’ve known how good we were and we lost some games we thought we shouldn’t have, but we fought through it. We persevered and we’re in the playoffs and we’re going to be dangerous.”

Williamsport looked mighty dangerous in the consolation game, defeating Montoursville, 7-0. Kyle Caringi was brilliant, throwing 6 2/3 innings of two-hit baseball and striking out eight as the Millionaires (12-4) won for the eighth time in nine games and broke open a close game with a five-run sixth inning. Caringi also had two hits as did Dallas Griess and the Millionaires stayed in the hunt for hosting a first-round district playoff game.

It was just the kind of performance Williamsport needed a night after dropping a 1-0 heartbreaker against South.

“After the tough game last night we wanted to bounce back and pitching at Bowman Field really motivated me,” Caringi said. “I pitched here last year and we didn’t get the result we wanted and this year I wanted a good result.”

The Lancers suffered no letdown following their thrilling comeback against Montoursville, riding Armson’s arm and some timely hitting while completing a Backyard Brawl sweep of league champions. Logan Burkett threw five strong innings for South (13-4) and the Mounties trailed just 1-0 after four innings. It was still a competitive three-run game after six innings, but Loyalsock erupted for seven seventh-inning runs, breaking things open and leaving no doubt about their playoff readiness.

Armson drove in the go-ahead run in the eighth inning against Montoursville as part of his three-hit day. He showed Saturday that he can be just as dangerous with his arm. Armson unleashed a slider he had been working on, mixing it with a fastball in the mid to upper-80s and tying up South all afternoon. Armson allowed just four hits in six innings, struck out six and quickly worked out of trouble any time South threatened.

“I kind of just did what I could. I knew I had it in me. I’ve been working on a slider all week and I kind of broke it out today and it worked out and it was really nice,” Armson said. “(Catcher) Rees (Watkins) was helping behind the plate and there was an overall good feeling from everybody. This is probably one of my best outings but I feel like I’m still not there yet. I feel like I can still do better.”

Loyalsock shared that mentality following its semifinal win and took a 1-0 second-inning lead when Watkins dropped a perfect bunt single and Derek Gee (2 for 4) hit an RBI infield single.

Chase Cavanaugh and Alex Schluter then formed a strong tag team, helping Loyalsock pad the lead in both the fifth and seventh innings. Cavanaugh singled and walked in those innings and stole second before scoring on Schluter’s RBI double and RBI single. Schluter also scored both innings, coming home on a wild pitch in the fifth and making it, 3-0. Schluter delivered his seventh multi-hit game and also stole two bases, igniting the offense from his leadoff position.

“Chase was really clutch today. He’s been having a great season as a sophomore and both times I knew he was stealing and I had to give him a chance to get there. Once he got there, I knew I had to put the ball in the outfield,” Schluter said. “I DH’d last year, but didn’t get a chance to play in the field a lot so I was looking forward to this year to show our coaches what I have. Thankfully, I’ve taken advantage of it and hopefully in the playoffs I can continue this hot streak.”

Gee and Armson did just that after delivering clutch hits in Friday’s semifinals. Gee drove in two runs and Armson had two more hits, finishing the Brawl 5 for 8 with two doubles and four RBIs. Armson hit a two-run single in the game-breaking seventh inning while Joeb Schurer added a two-run single.

Pete Sinibaldi hit two doubles for South and scored a two-out run in the seventh inning off a passed ball. The Mounties, though, struggled to deliver a timely hit when they had their chances and Loyalsock turned two double plays.

“Everyone was focused today,” Armson said. “You saw that at the plate, you saw that in the field. It was just a good game we put together.”

Good would be an understatement for how well Caringi threw in the day’s second game. The left-hander dominated a Montoursville team that entered the tournament 13-1, retiring 14 of the last 15 batters he faced. The senior showed why he will be pitching at St. Bonaventure next spring, letting just one runner reach second base and looking untouchable after working out of his lone jam in the third inning.

It was the best game Caringi has thrown this season and he owned the stage against a strong team. Caringi had not had a lot of luck over his last few starts, but put it all together yesterday and showed how good he is. Jaxon Dalena hit a leadoff double in the third inning, but Caringi dominated from there, striking out the next four hitters and finishing with eight strikeouts.

“Kyle came to throw. He wanted this game and he pitched really well,” Caringi said. “His outings before, it was a matter of bloop hit here and there. Things weren’t just lining up for him. It wasn’t him getting lit up or anything. It was more along the lines of he just couldn’t get the game to roll in his favor and today he did and that’s a product of working hard and being persistent in what he does.”

Things are lining for Caringi offensively as well and he delivered two hits for a second straight game. Caringi’s single was part of the five-run sixth inning as Williamsport put the game out of reach. Dallas Griess (2 for 4) also hit an RBI single that inning while Brayton Rowello drew a lead-off walk. The first six batters reached base in the sixth and even the first two outs were productive with Drake Mankey hitting a sacrifice fly and Joe Fagnano an RBI grounder.

CJ Signor threw well in his first varsity start for Montoursville, stranding six runners in his four innings before Dylan Moll struck out three in relief. Caringi, though, made that 2-0 fourth-inning lead look more like 20-0 and then ignited the sixth-inning rally with his leadoff single.

“I got DH’d for last year and I didn’t play first base because we had a lot of seniors,” Caringi said. “I wanted to work on my hitting this year because I’m a senior and I want to help my team in every way possible.”