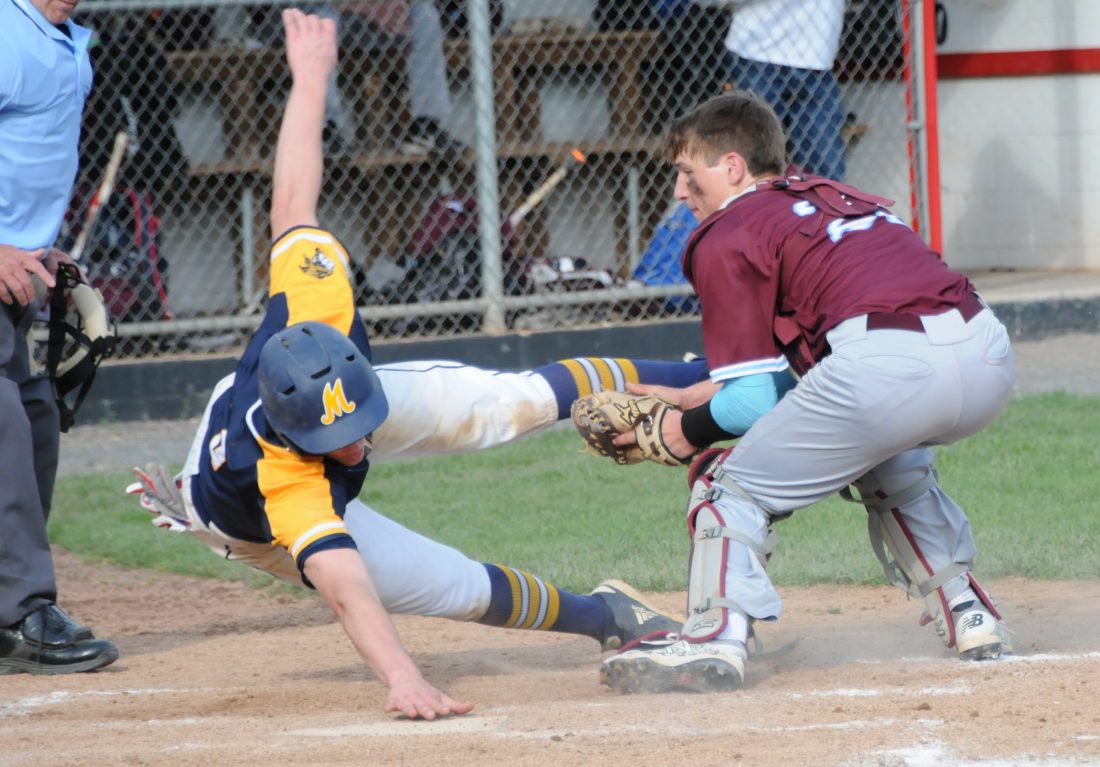 MARK NANCE/Sun-Gazette Montoursville’s Gabe Phillips is out at home by Loyalsock catcher Rees Watkins in the first of two games Friday evening at Logue Field as part of the Backyard Brawl. Loyalsock won and plays in today’s championship.

Luke Winner envisioned this situation so many times, but the South Williamsport center fielder never before earned the opportunity.

A year ago, Matt Worth was in junior high and Dane Armson was fighting for playing time. That Loyalsock tandem longed for a shot at showing they could shine on a big stage.

Those three earned their chances Friday at Logue Field and cashed in. Winner lived a dream, Worth shined on the mound and Dane Armson hit the go-ahead double as South and Loyalsock won thrilling Backyard Brawl semifinals. Winner threw out a runner trying to score from third, clinching South’s 1-0 win in the night game after Worth threw four strong innings in relief and Armson put Loyalsock ahead to stay as the Lancers rallied for a 5-4, eight-inning win against defending champion Montoursville. Tripp Breen threw six shutout innings and struck out 13 for South (13-3) which will play Loyalsock for the championship at 1 p.m. at Bowman Field today. The Lancers (9-8) avenged two previous losses against Montoursville and earned their fifth straight finals appearance.

Still, the Backyard Brawl is not just about championships. It is about making memories playing against neighborhood rivals these players have competed against all their lives. Those four players and several more certainly made many in two games that defined what makes this annual event so exciting.

“I’ve dreamed of something like that. It was awesome,” Winner said minutes after ending the game with his missile of a throw. “Williamsport is a good team and we know a couple of guys on that team so it was a big game for us and a big win. We felt good coming over here and it’s fun we’re together as a team like we were.”

“How could you not be excited for this one?” Armson said. “”Every game you have to enjoy it and I’m enjoying my time out there. It was a tough game and we needed that win.”

Loyalsock rallied from a 3-1 deficit to defeat Montoursville a day after the defending champions defeated the state’s No. 1-ranked Class AAAA team, North Schuylkill. The South-Williamsport game did not feature the same kind of back and forth entertainment, but it was every bit as exciting. Breen overpowered Williamsport for six innings and Logan Burkett’s third-inning RBI single gave the Mounties a 1-0 lead it took into the bottom of the seventh.

Xavier Taylor hit a pinch-hit, leadoff single on Breen’s 102nd and final pitch before Owen Berry bunted him to second and Carter Sagan singled him to third off reliever Pete Sinibaldi. Six pitches later Brock Moyer lofted a flyball into center field. It was shallow, but deep enough for the speedy Taylor to try scoring. The scenario Winner had played out in his head so many times became reality and it played out exactly as he hoped.

Winner had momentum going forward when he made the catch, then unloaded a rocket toward catcher Dom Harding. Taylor made it close, but Winner’s throw hit Harding chest high and the catcher made a quick tag, completing the double play and giving South its first win against Williamsport since 2003. Winner hit a walkoff home run against Bloomsburg earlier this season and now he has a walkoff throw on his resume.

“I saw it was coming up in the air, so I timed it perfectly so I could chuck it home and it all worked out from there,” Winner said. “I felt I was going to have a decent chance if it was on target and it happened.”

“If it was on line I knew it was going to be a good play,” South coach Smokey Stover said. “He stayed behind it and played it right and had a little momentum coming in. He’s got a hose and he showed it.”

Before Sinibaldi earned the save, the St. Bonaventure pitcher mowed through Williamsport’s lineup for six innings, striking out 13 and surrendering just two hits. Breen left runners at second and third with no outs in the second and then started putting on a pitching clinic. Hitting the area’s wins leader (7) is tough enough and doing so without five starters can be like scaling Mount Everest without any hiking equipment. The Millionaires were without those starters after they tarped Bowman Field early in the afternoon, but did not return to school.

Truth is, it probably would not have mattered. Breen has not allowed more than two runs in a game all season and won his seventh straight start, topping 10 strikeouts for a sixth time. Breen struck out the side in the fourth inning and fanned multiple hitters five times. This was the second time Breen has helped South win a 1-0 decision and he has been especially dominant in high-stakes games. He was again last night and Dom Harding drawing a leadoff walk and Burkett driving in pinch runner Tyler Trojan with his RBI single to left field was all the run support he needed.

“I waited four years to pitch against them and I got my chance and I just tried to take advantage of my opportunity. I’m very grateful for the opportunity I had and it was tons of fun playing under the lights. It’s all you can ask for,” Breen said. “I was pushing out there at the end. I was just giving everything I had. That’s all I could do, just give it everything I had.”

Jon Zayas did the same for Williamsport (11-4) throwing 6 1/3 innings of five-hit baseball and striking out six. Kyle Caringi went 2 for 3 with a double, but those were the only hits Williamsport produced through six innings as its seven-game winning streak ended.

“They grew up with all these guys and they were excited to play and what I was most happy about is we didn’t buckle,” Stover said. “It was a big win for us.”

Loyalsock felt the same way after handing the defending District 4 Class AAA champions just their second loss in 15 games. The Lancers took a huge step toward reaching the postseason and showed how dangerous and tough they can be. Anthony Pastore stranded 10 runners in four innings as Loyalsock fought off repeated Montoursville trying to break open the game. Then Worth showed that both his present and future are bright, tying up Montoursville for four innings and giving Loyalsock a shot at the comeback.

The Lancers scored twice in the sixth and twice in the eighth, taking a 5-3 lead. Gabe Phillips hit a two-out RBI double, making it 5-4, but Worth never lost his composure and induced a game-ending flyout, quieting Montoursville for a third time in relief this season.

“I just kept pitching to contact. I went right back and attacked the next hitter. It felt amazing,” Worth said after scattering three hits in his four innings. “We were only 8-8 so this helps our season a lot to come through like that. I loved it.”

“He pitches with a lot of conviction. Whatever you tell him to do, he’s going to do. We have a lot of young kids like that and conviction is very powerful,” Martin said. “He’s made huge strides as a freshman and he’s a kid that just doesn’t care what the situation is. It doesn’t matter who is up there. It could be the Yankees and he’s not going to flinch.”

Loyalsock’s hitters did not crumble either. Montoursville freshman Maddix Dalena threw five brilliant innings of three-hit baseball, striking out six in five innings, but Loyalsock went to work against Montoursville’s bullpen in the sixth. Connor Watkins and Nick Barone (3 for 4, 2 runs) hit consecutive one-out singles before Armson ripped an RBI single into left field and made it a one-run game. Derek Gee then produced one of the game’s signature moments, perfectly executing the squeeze and bunting an RBI single to the right side of the mound that tied the game. Hunter Shearer left the bases loaded with one out and stranded another runner at second in the seventh before Loyalsock mounted the game-winning rally in the eighth.

Barone hit a leadoff single before Armson did not get a bunt down and fell behind 0-2. Turns out, missing the bunt might have been the best thing that happened because Armson crushed the next pitch deep into the left-center field gap for the go-ahead RBI double. Rees Watkins hit a double to the left-field fence a batter later, scoring Armson and making, 5-3.

“For Dane to sit back on that curveball and drive it is probably the best ball he’s hit this year. He’s hit a lot of balls really well but that one was beautiful and maybe it’s because of the situation,” Martin said. “Up and down our lineup our kids battled today. I feel really good. We needed something like that.”

Montoursville took a 3-1 lead in the fourth inning when Nolan Kutney doubled and scored on Phillips’ RBI single. Dylan Bower added a two-out RBI infield single. The Warriors will play Williamsport in today’s consolation game at 3:30 while the tournament underdogs battle for the title beforehand. Both come soaring into that game.

“It was fun game to win,” Worth said. “Now we have to go and try winning again to keep it going.”

“There’s not going to be an ounce of energy we don’t put into that game,” Breen said. “We’re giving everything we have.”