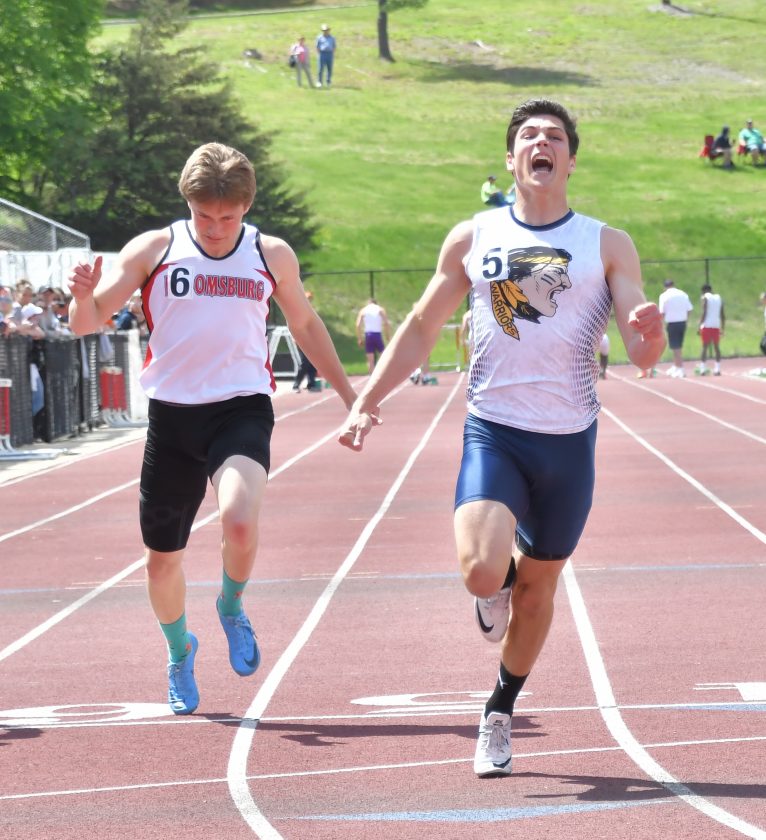 MARK NANCE/Sun-Gazette Montoursville’s Jacob Reeder celebrates after placing second in the boys Class AA 100 at Williamsport on Saturday on the second day of the District 4 track and field championships.

Addison Magyar was fine with being a key contributor on a district and state medalist relay team. But at times, the medal stand was getting a little crowded with three other athletes crammed together on a small podium. And for once, the senior was finally alone at the bottom of the highest stand. He knelt in disbelief and happiness as he waited for his name to be called, not as part of a relay team, but alone, as an individual district champion echoing throughout STA Stadium.

“I’ve waited all four years of high school for this. I’ve been blessed to come here every year with my team’s 4 by 8 and 4 by 4. Not once have I come here and succeeded in an individual race. That was my ultimate goal,” an elated Magyar said. “The 4 by 800 relay is great, but I want some individual credibility. I wanted something that I earned personally and I guess this is something to show for.”

Magyar will have a chance to become the first athlete in program history to win a medal at states all four years. He’s already won relay medals the last three years and will get a chance to add to an already crowded trophy case this weekend at Shippensburg.

The final stretch was the most difficult for Maygar, but he had to keep pushing through. It was his first race of the day so he already had a leg up on the competition. He held off Wyalusing’s Logan Newton by about a second and once he crossed that finish line to a plethora of cheers, he was nearly overcome with emotion.

“I saw the finish line. I was like this is it. I have 4 by 4 after this but this is my race. This is what I’ve been training for,” Magyar said. “… The guys I was running with, a good handful of them already ran the mile and so I was probably one of the freshest guys in the field. I was trying to gain an advantage. But you know what, they all fought hard. We all ran and battled. May the better man win but I’ve been running with (Southern Columbia’s) Ethan Knoebel. I’ve been running with (Mt. Carmel’s Andrew) Rooney, I love those guys. District 4, we’re coming for states.”

Caputo narrowly missed out on district gold at last years meet in both the high and triple jump. This year he was focused on winning gold and set milestones that would all but guarantee a spot at the top of the medal stand. At last years district championship, the Montoursville senior placed third in the triple jump and second in the high jump. He bested those marks with a season-best in the triple jump of 44-8.50.

His high jump was just as impressive. It capped two climbs on top of the podium as he earned gold with a jump of 6-1.

“It just shows all the work I put in practice,” Caputo said. “It just really helped me out.”

Schreffler and Bedell are constantly making eachother better. Going against the best hurdler in the district, each has to raise their game to the highest level every practice and it showed yesterday when each Lewisburg hurdler landed at the top of the podium.

The 300 has helped Schreffler with his stamina and endurance while the 110 has helped Bedell hit better times and the two have become more dangerous for it. Bedell was the defending district champion in the 110 hurdles, but was more than happy to see his rival and teammate win it this year.

“It’s great because every single dual meet, every day in practice, I have the districts best right next to me,” Schreffler said. “It’s really competitive.”

Long had little trouble hitting his 14-foot mark on the pool vault throughout the season. After placing second at districts last year, the Milton junior knew he had to improve his height if he wanted to win gold and he improved them by a foot to earn his second pole vault medal and his first gold.

“At the beginning, I came in at 13. I missed my first two attempts. That got to my head. I always get to a point where I’m super worried and I psych myself out then I end up doing bad,” Long said, who was at Southern Columbia last year. “Today, my coach talked to me and said, ‘Today is all right. You know where you stand so just keep that in your mind.’ I kept progressing, finished 13-6, got to 14 and once I got to 14, I knew I was there. I’ve been hitting 14 pretty consistently over the season so it felt good.”