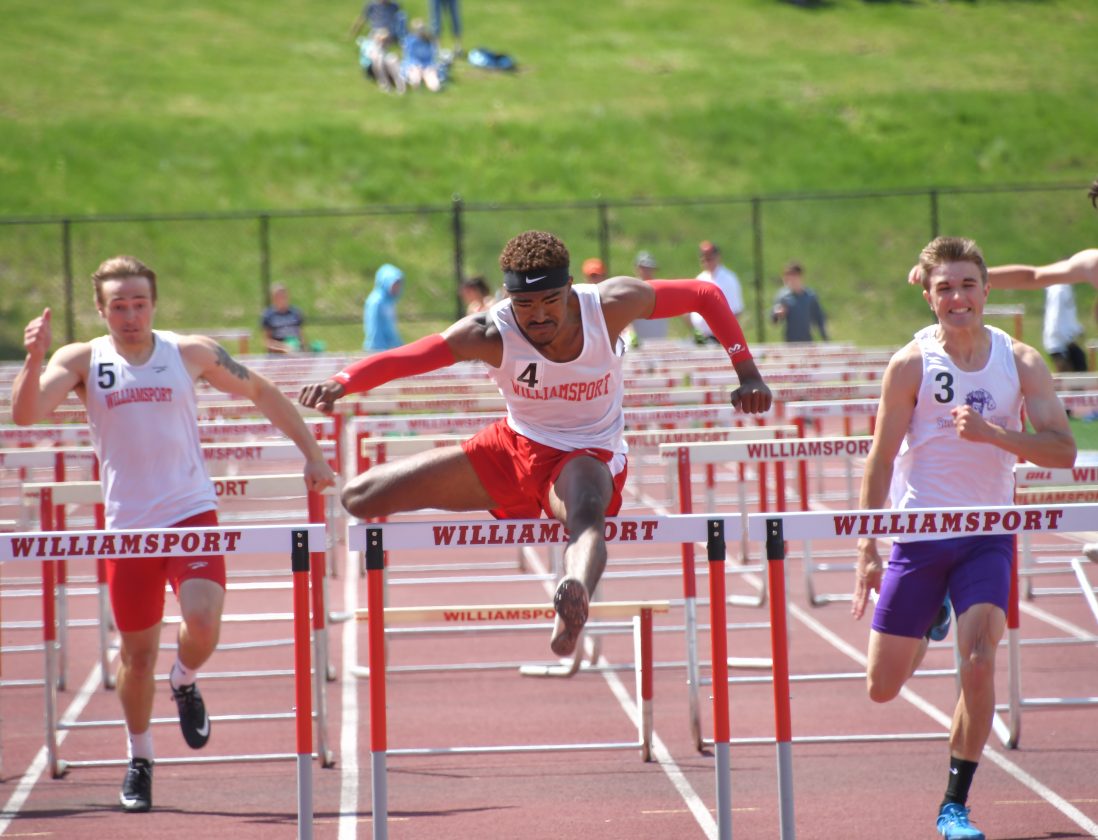 MARK NANCE/Sun-Gazette Williamsport’s Allen Taylor clears the final hurdle as he holds the lead in the boys Class AAA 110 hurdles at Williamsport on Saturday.

J. Henry Lyon could feel Doug Hallman breathing heavily down his neck. Lyon couldn’t seem to get away from the Shikellamy runner and his hopes of capturing a district title seemed to be fading faster than the sun on an overcast Saturday.

Lyon received his second wind in the final 400 meters and began to open up, and, with speedy and long extensions, started to pull away. The Williamsport senior ran a 9:32.72 in the 3,200 to capture a Class AAA district title and a berth at next weekend’s state championships.

Lyon helped Williamsport, which placed second in the team standings with 121 points, behind Shikellamy’s 150 points, get off to a quick start with his first-place finish in the opening track event of the day. His time of 9:32.72 helped him win his first district title and was nearly 40 seconds better than his time from last year’s districts when he placed fourth in the event.

“I feel great about the improvement I’ve made from last season at districts to where I’m at now,” Lyon said. “I’m so glad to be going to states.”

Lyon held a lead for much of the race, but Hallman, who finished second at 9:42.90, began to make his move on the sixth lap. This is when Lyon had to dig deep. All the little things he’s worked on over the past year and a new diet helped him keep the lead and hold off a charging Hallman. Lyon’s eighth and final lap was his third fastest of the entire two mile run at just over 1:11.

“That scared me a little bit so I had to just power through the rest of the race,” Lyon said. “Right after that I just started to go and get relaxed when he came up on me a bit.”

Taylor came into the meet with a big target on his back as the defending district champion in both the 110 and 300 hurdles. After struggling through parts of the regular season, Taylor was ready to take the challenge head on. Taylor even tied a district meet record that he’s been chasing since last year. The impressive sophomore tied former Williamsport standout Jerome Potts’ 110 hurdle district time of 14.30 set back in 1990.

“I’ve been trying to go for it since last year,” Taylor said. “… I knew I was capable of getting there. I know next week I can go for it and hopefully break another record.”

Taylor set a new personal best in the event, chopping off .63 seconds from last years district-title winning 110 hurdle. In the 300 hurdles, Taylor won with a time of 38.83, nearly a second better than last year’s district-winning time.

“I knew that the second place finisher in both events, he was a junior last year. I knew he wanted some sort of redemption,” Taylor said. “He was running an excellent race. He tested me in both of my events and to come back and defend it was great.”

It was a storybook finish to a year with plenty of ups and downs for Taylor, who wasn’t sure he wanted to compete anymore a couple months back. But he got his head on straight and his heart back into competing and it all culminated with two more district golds, plus another chance on improving his seventh-place finish in the 110 hurdles from last year’s state meet.

“With where I was in the beginning of the year, I never thought I’d get to this point,” a grateful Taylor said. “If I can just say it was God, it was God.”

While in the final 20 meters of his 800 run, Mahon could feel how close Logan Strouse was getting. The Shikellamy runner nearly bumped into Mahon and the junior, who’s also a wrestler, thought he’d might have to come up with a takedown to earn the win. But Mahon’s speed and guts were enough in the final few strides of the 800 as he set a new personal best with a run of 1:56.77.

It was a sense of deja vu for Mahon and Strouse, The two were pitted against each other in the same event at the same spot of the race two years ago. And the result was much of the same with Mahon winning by a fraction of a second with Strouse coming in at 1:57.01.

Despite his personal best, Mahon is far from pleased. He know’s he can do better and he’ll look to improve on that time when he competes at Shippensburg this weekend.

“It was decent, but do you want me to be honest? I’m looking for a hell of a lot more. There’s no doubt about it. I’m looking to do a lot better,” Mahon said. “Strouse is a heck of a competitor but I know when I get out there, and I don’t know why, I’m really relaxed. But when they come up, I’m like, ‘Crap, I have to keep going and pushing through.’ I just relax too much. I know I’m out there and I’m very confident in myself. I know I can do it. So I relax. Next weekend we have to change and fix that.”

After his 800 run, Mahon still had plenty left to give. In the 1600 relay, he ran the final leg to help the squad of Dalton Biichle, Taylor and Treyvon Eiswerth take gold in the final event of the day with a time of 3:28.35. Mahon and his 51 second split helped Williamsport overcome about a five meter deficit in the final 100 meters to close out a successful day for the Millionaires.