Williamsport’s season comes to end in 1st round of states 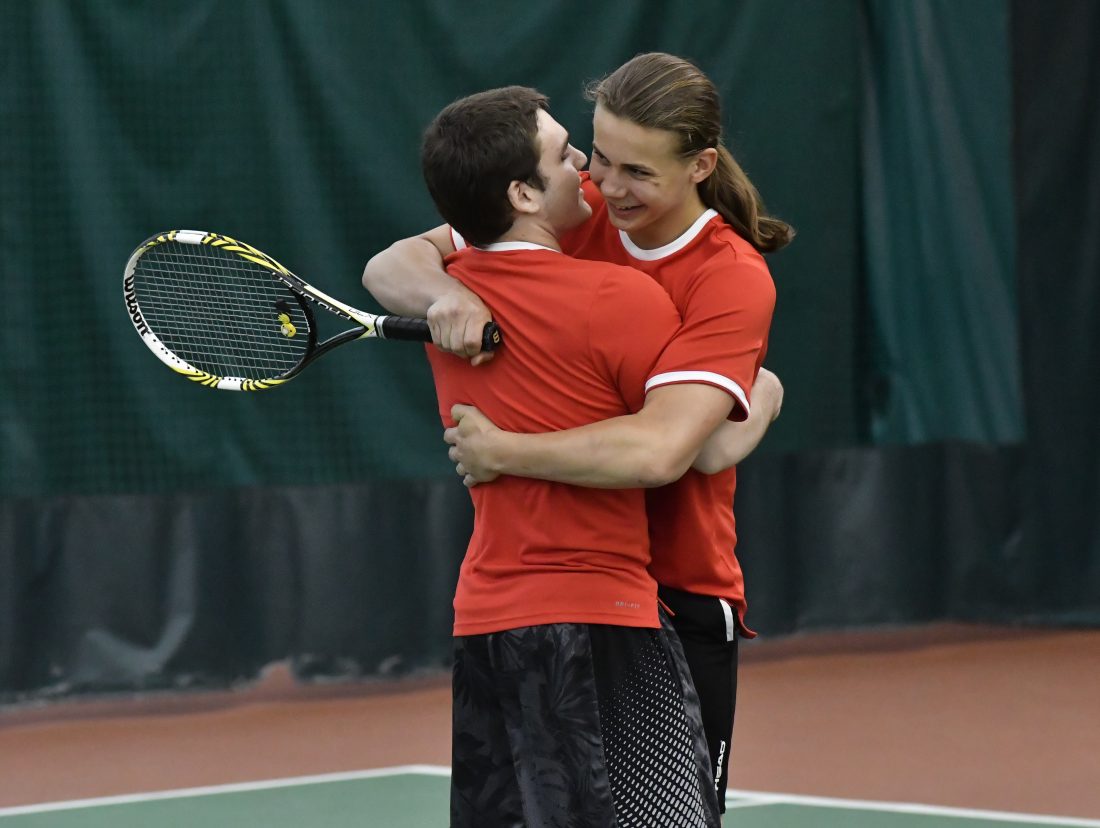 MARK NANCE/Sun-Gazette Williamsport’s Caleb Kight, right, and Cameron Butler hug during their match at No. 2 doubles against Dallastown’s Jack Lynam and Cameron Koons at the Central PA Tennis Center on Tuesday in the first round of the PIAA Class AAA team tournament.

After losing five starters from a district title and state tournament team, Williamsport wasn’t supposed to repeat either of those feats. Ten wins would’ve been a pleasant surprise and maybe even a district win. But a relatively young Williamsport team had other ideas.

The Millionaires romped to a 15-1 record with two sweeps in districts to win a second straight title, but their historic and surprising run came to an abrupt end in the opening round of the Class AAA state tournament on Tuesday afternoon, falling to Dallastown, 5-0 at the Central PA Tennis Center.

After falling to Hollidaysburg in the state’s opening round last season, Dallastown advances to the quarterfinals to take on District 1 runner-up State Valley, which defeated LaSalle College, 5-0.

Williamsport graduated five senior starters last year and had to re-shuffle its lineup, playing underclassmen at the top of singles and getting quality production from a relatively inexperienced lineup.

Williamsport ran into a much more experienced and heavily skilled Dallastown squad. The second place team out of District 3, Dallastown, which was 15-0 heading into district play, featured a No. 1 singles player in Holden Koons, who is a four-time state qualifier in singles and was the state runner up last year. Koons made quick work at his No. 1 singles spot, defeating Amani Tran, 6-0, 6-0. The skilled senior had a speedy serve with nearly perfect ball placement and accurate slice shots. Add in elite net play and you get one of, if not, the favorite to come away with state gold in the singles tournament.

Dallastown, which made minimal mistakes, had little trouble in the other matches as none of them got to a third-set and the whole match was done in under an hour. At No. 2 singles, Jon Burns defeated Liam Ferry, 6-1, 6-1 and at No. 3 singles, Sebastian May came away with a 6-0, 6-1 win over Kyle Shuler, a freshman.

In doubles play, Simon Wallace and Ty Baker fell to Moah May and Aryan Saharan, 6-2, 6-1 at the No. 1 slot and at No. 2 doubles, Cameron Butler and Caleb Kight were defeated by Jack Lynam and Cameron Koons, 6-1, 6-0.

Despite the early exit, Williamsport accomplished a lot this season. Winning the programs sixth district title in the 2000s and winning back-to-back championships for the first time since 2006-07. Unlike last year, Williamsport returns a solid core with three starters in 2020, including two of the top three singles spots.

“We lost five from last year so coming back, expectations were do the best we can. Getting to states was a bonus,” Dorner said. “Coming in I knew the other team was really good.”