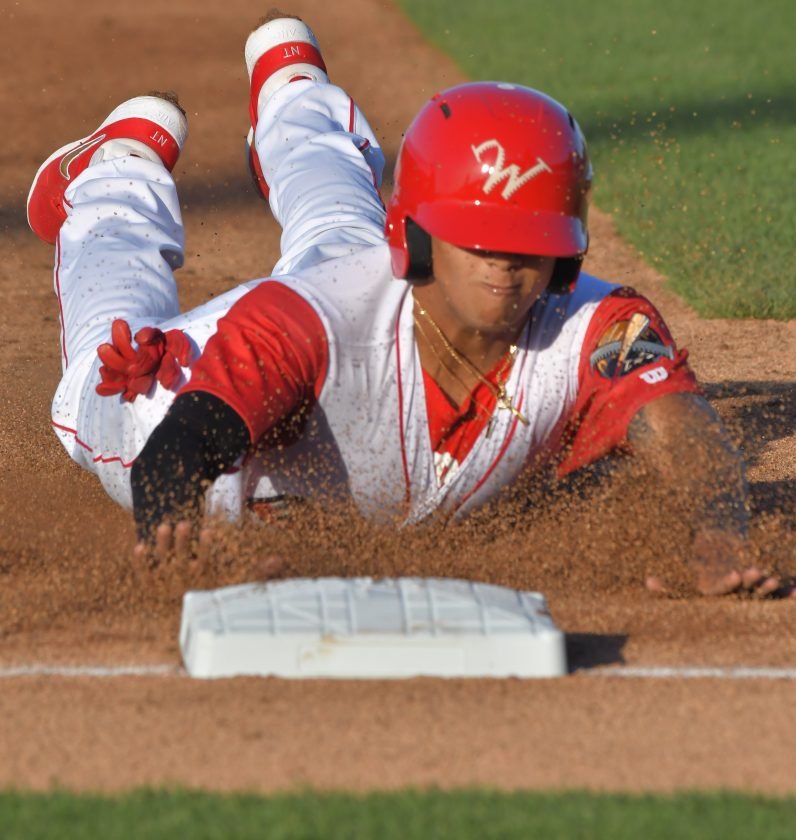 Pat Borders looked across his desk at Williamsport coach Greg Brodzinski and postulated it had been multiple weeks since his team made as many errors as it did Friday night at Bowman Field. The season-opening loss for the Crosscutters was littered with seven errors, all on the infield, in a 4-3 loss to State College.

It was a head-scratching performance for the Cutters’ fifth-year manager. He guessed in the past three or four weeks of extended spring training combined, his team hadn’t made seven errors. But under the lights and in front of more than 2,500 fans, it was clear nerves were a factor in the opening day loss.

Borders said it would easy to put last night’s performance behind them, especially after watching the infielders loosen up over the final four innings. After all, it was just 1/76th of a season which is going to reach grind status in a few short weeks. So he wasn’t worried about the unearned runs or the extra outs given to a Spikes offense which used a Kevin Woodall Jr. solo home run in the fifth inning for the winning margin.

He chalked it up to nervousness and maybe an abundance of excitement. And there’s no way he’s killing that excitement for his players. Borders is a fan of using each possible moment as a learning experience. And while it may have taken four or five innings to loosen up last night, he said as these players move forward in their careers, that time will continue to shrink.

“It was a good first game to get stuff under your belt,” said second baseman Logan Simmons, the only infielder not to make an error last night. “All the errors and flukes, you can soak that in now and get back at it (Saturday).”

“You have to grow and learn and develop,” Borders said. “When you go up to triple-A or double-A, the crowd gets even bigger. You have to program that computer in your head before you get to the big leagues and you’re in front of 40,000 or 50,000 people.”

A ground ball through the legs of Connor Litton at first base allowed one run to score in the top of the fourth inning when State College took its first lead, 3-2. And that run was set up by a catcher’s interference call which put two runner on base with nobody out.

But the Williamsport pitching staff always found a way to pick up its defense until it finally settled in midway through the game. Abdallah Aris struck out back-to-back hitters in the top of the fourth to strand a pair of runners in scoring position. Alejandro had a pair of strikeouts of his own to overcome an error and a hit batter in the ninth inning to keep the game at 4-3 heading into Williamsport’s final at-bat.

State College’s Fabian Blanco worked around Keudy Bocio’s leadoff double in the bottom of the ninth to strand him at third base. When Blanco fielded Julio Francisco’s weak comebacker and flipped to first base, it closed out a two-inning save for Blanco, who allowed just the one batter.

The Cutters actually outhit State College, 8-7. Leadoff hitter Nicolas Torres scored all three runs for Williamsport. He scored on Simmons’ 403-foot sacrifice fly to dead center field in the first inning. He scored again in the third on Simmons’ two-strike double to right field. And he added a third run on Francisco’s RBI single in the fifth.

For all the nervousness Williamsport had in the field, it showed none of it at the plate. Five of its eight hits went for extra bases. Francisco and D.J. Stewart each had a pair of hits, and both of Simmons’ RBIs came in two-strike counts.

“With two strikes I try to get a little more selective with breaking balls I swing at and don’t swing at,” Simmons said. “Going through extended and having a year in the GCL, I really understood my two-strike approach and knowing what I can and can’t hit.”

“I thought most of the hitters swung the bat relatively patiently and they didn’t get away from who they are,” Borders said. “The defense is something we’ll have to grow into, but swinging the bat was pretty good.”