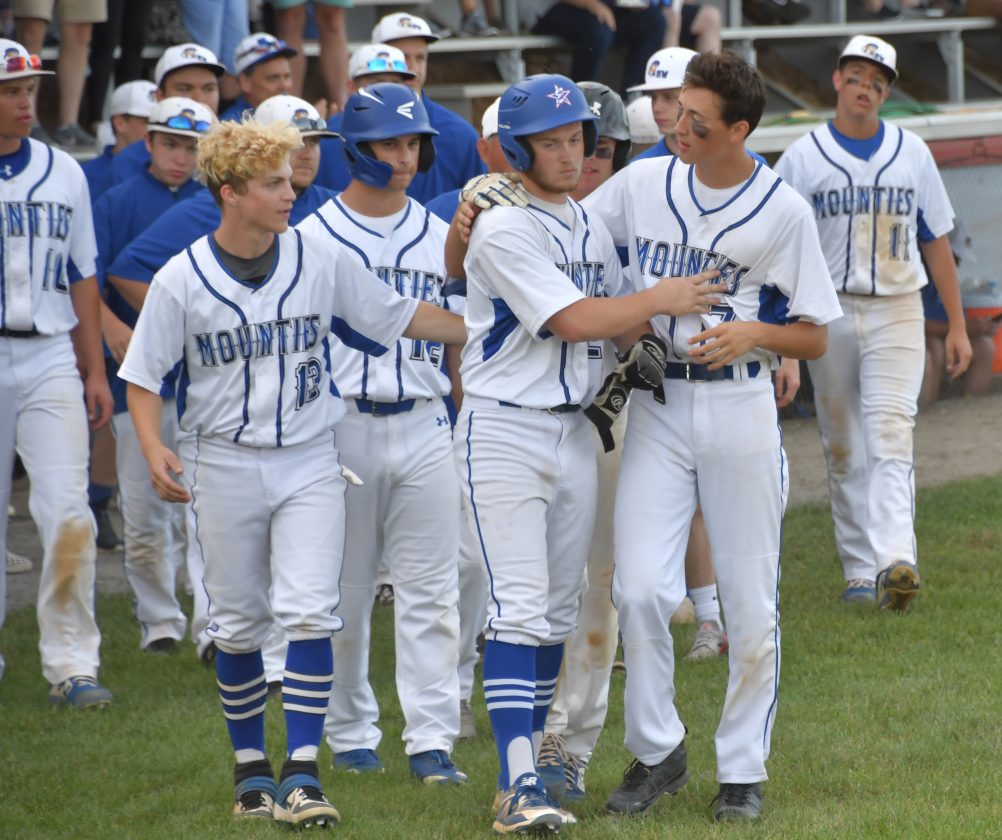 MARK NANCE/Sun-Gazette South Williamsport players leave the dugout after the final out in their 3-1 loss to Devon Prep in the PIAA Class AA semifinal game at Pine Grove on Tuesday.

Their Mounties had one last chance to extend this historic season and reach the state final as they prepared to bat in the bottom of the seventh inning. The players felt that energy, stayed motivated and believed. A team which won so many close games before never doubted it would do so again.

The effort and the will were there. Andrew Czachor just made sure the hits were not.

“I totally thought we were going to come back,” South pitcher Tripp Breen said. “I thought it was all going to come together. Sometimes it just doesn’t happen. That’s baseball.”

“I love all that noise. I usually don’t hear it what they are saying, but I love the noise. I take it and use it as energy,” Czachor said. “The pressure doesn’t get to me.”

It did not rattle South either. The Mounties simply ran into an outstanding pitcher who was at the top of his game. Czachor entered with the tying runners on base and no outs in the fourth inning of a 1-1 game. The senior right-hander once hit a walk-off home run to help his Little League team capture a district championship and coveted this latest opportunity.

Czachor then started mowing through South’s lineup, striking out the side and reversing the momentum. He never really slowed down either, retiring nine of the 12 batters he faced and striking out at least two batters each inning. He sometimes mixed in a nasty curveball, but Czachor mostly relied on his heater, blowing his mid-80s fastball past hitters and letting just one ball leave the infield. Czachor will pitch at High Point next year and was so effective that when Devon Prep (11-13) scored two sixth-inning runs it felt more like South was down 20 runs and not two.

“Those are the situations I strive to be in, the high-pressure situations. I always know the coach is confident in me. I’m always looking at our second baseman Aaron Nuble and telling him I’m ready. When coach put me in I was ready to shove it in there and attack the zone,” Czachor said. “It’s always the big dream to pitch in games like this. I’m always liking those high-pressure situations where it’s make or break.”

“We had two guys on and that could have changed everything (in the fourth), but we didn’t get that hit but that guy was dealing,” South coach Smokey Stover said. “He was really throwing well.”

South’s workhorse was brilliant again, throwing a four-hitter and striking out nine. Breen retired 12 consecutive batters going into the sixth inning and surrendered only a bunt single over the first five innings. Breen surrendered just 13 runs all season, won a program-record 11 games, and struck out 137. Breen was so outstanding that Devon Prep’s three runs were the most he allowed all season.

“Tripp pitched a great game,” Stover said. “Tripp carried us all the way through here. He gave us a chance every game and the team behind him is pretty remarkable.”

“Tripp threw a heck of a game,” South catcher Dom Harding said after throwing out both Devon Prep runners who tried stealing bases. “He was dealing. Only a third of the lineup could catch up to him.”

Devon Prep used some fantastic two-strike hitting to break through against Breen in the sixth. Following Aaron Nuble’s leadoff single, Czachor drove an 0-2 pitch into the left-center field gap for a double which put the go-ahead runners in scoring position. Jackson Jonic then got under a 1-2 pitch, hitting a sacrifice fly to right field. Pat Coleman followed with an RBI single, dropping an 0-2 inside pitch into shallow left field.

Breen induced an inning-ending double play, limiting the damage. He closed his performance in impressive fashion, retiring Devon Prep on nine pitches, striking out two more and giving South one last shot at a rally.

“I was just giving everything I had,” Breen said. “I left everything out there and just did what I could.”

Devon Prep took a 1-0 second-inning lead when Eammon Walsh was hit by a one-out pitch. Matt Romano then dropped a bunt single and Walsh reached third on an error. The Tide continued playing small ball a batter later as Kevin Walton dropped a well-placed squeeze bunt which scored Walsh.

South immediately responded in the bottom of the second. Luke Winner rocketed a one-out double to right field and Nate Persun moved him to third, bouncing an infield single down the third-base line. Winner scored with two outs, making a good read and breaking for home and scoring on a wild pitch that skittered just a few feet from home.

When Pete Sinibaldi hit a fourth-inning leadoff single and Logan Burkett followed with a walk it appeared South might take the lead. Then Czachor entered, put out the fire and found a way to put away a resilient team that had won nine straight games decided by two runs or fewer.

“We had a couple instances where we almost got down (emotionally), but they handled their vocal stuff pretty well. We had a little hiccup and they got really loud but then they calmed down and we played a nice game,” Stover said. “I just told them that I could not be any prouder of them.”