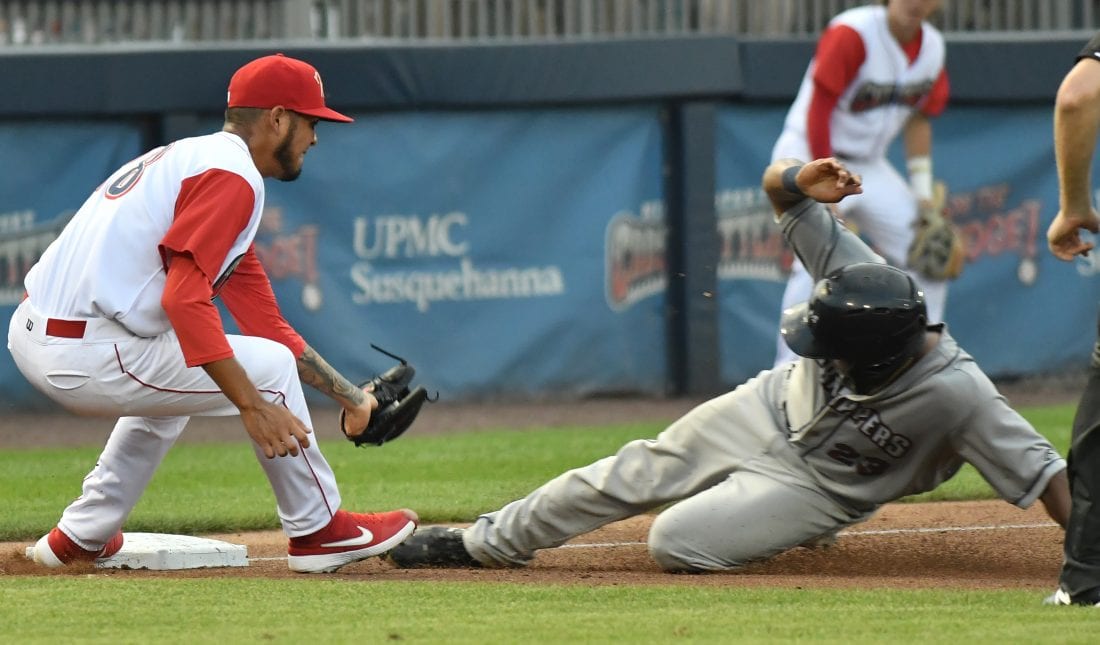 MARK NANCE/Sun-Gazette Williamsport pitcher Leonel Aponte prepares to tag out Mahoning Valley’s Billy Wilson (23) at third base on a foul out to left field in the fourth inning at Bowman Field.

The ball Hunter Hearn hit to left field in the fifth inning had everything it needed to make the Bowman Field fans believe it was going to be a home run. There was the trajectory off the bat. There was the immediate turn and retreat toward the left-field wall by Mahoning Valley left fielder Billy Wilson.

It appeared as if Hearn had just driven in the tying runs for the Williamsport Crosscutters with what would have been his third home run of the season. Then Wilson stopped at the wall. He timed his jump perfectly and watched the baseball settle into his glove.

He bounded toward the infield knowing he took away an RBI and likely an extra-base hit from Hearn, ending the bottom of the fifth. A half-inning later, Wilson did more damage to the Cutters, this time hitting a two-run home run into the Williamsport bullpen which extended the Scrappers lead to four runs and set up Mahoning Valley for a 7-0 win in the series finale Friday night.

Williamsport squared up the ball pretty well against Mahoning Valley starter Carlos Vargas, who featured an upper-90s fastball and a wipeout slider. But despite hitting the ball solidly against him, they had no runs to show for it.

The Cutters were shut out for the seventh time this season last night. They also lost outfielder Hunter Markwardt in the first inning when he crashed headfirst into the center field wall chasing a fly ball hit by George Valera. Markwardt lay motionless on the warning track for a few seconds before getting to his feet and walking off the field under his own power. Cutters manager Pat Borders said he expects Markwardt to be fine.

Hearn’s drive to left field came three batters after Logan O’Hoppe nearly homered for the second consecutive night. O’Hoppe turned on a 95 mph fastball and launched a rocket which hit the very top of the left-field wall in front of the Mahoning Valley bullpen and bounced back into the field for a double.

O’Hoppe was stranded there for two batters before Hearn stepped in. Vargas ran a fastball just in on the hands of Hearn which kept his fifth-inning drive from getting out of Bowman Field. And by just getting the ball off Hearn’s barrel, it gave Wilson to leap at the wall and make the catch for the final out of the inning.

“Hearn’s got a good swing with a little bit of power. I like what I see out of him. He’s hitting around .200, but he’s got some ability,” Borders said. “If we’re able to get a home run out of him there, it really changes the momentum of the game.”

But instead of tying the game at 2-2, Wilson’s catch left the Williamsport offense spinning its tires. Although Hearn, O’Hoppe and Johan Rojas were able to square up Vargas’ fastball, nobody in the lineup seemed to have an answer for his slider.

Topping out at 91 mph with his slider, Vargas didn’t even have to throw the pitch for a strike to be effective with it. Bryson Stott was a victim of that slider, as was Juan Aparicio twice, and D.J. Stewart and Nicolas Torres.

Vargas entered with an ERA over eight, but tossed six shutout innings last night and matched his season high with six strikeouts.

“I think that’s the effect of velo,” Borders said. “I think he was 97 or 98 with his fastball and he gave you a good look at it and we hit him fairly hard. But the slider off that, he threw some good sliders in a good slot that made you chase.”

Mahoning Valley jumped out to a 2-0 lead when Markwardt couldn’t hang on to the deep drive by Valera before crashing into the wall. Valera circled the bases for a two-run, inside-the-park home run to give the Scrappers a 2-0 lead in the first inning.

And it appeared Leonel Aponte was nearly out of the sixth inning unscathed having gotten to two outs and an 0-2 count on Wilson. But Wilson, who was hitting .180 coming into the game, got an 0-2 pitch on the inner half and drove it out of the ballpark for a back-breaking home run. It was his first home run since Aug. 18 last year in the Arizona League.

Decade’s best No. 5: Ali Hillson was a winner at North Penn-Mansfield in girls basketball

When Jenna Waring was in the circle for Montgomery, Loyalsock's offense couldn't seem to get the spark it wanted. ...

Decade’s best No. 6: Steph Shamburg was a difference-maker with Warrior Run