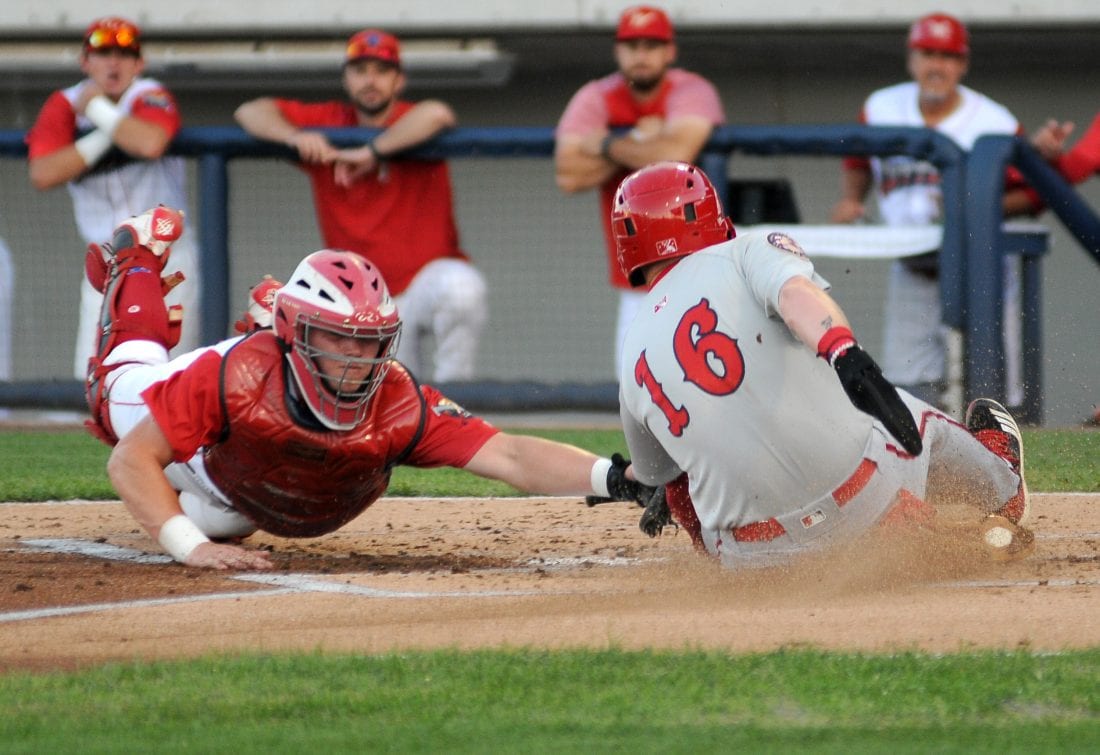 Tyler Burch was in a mess he created himself. First it was with a wide throw on a pickoff attempt to second base. Then it was with a wild pitch which allowed a run to score.

With one out in the sixth inning, the Williamsport Crosscutters’ pitcher stared at the tying run on third base and buckled down. The game-tying run never scored thanks to the second and third of his six strikeouts Thursday night at Bowman Field. Burch followed with three scoreless innings to earn his first career save as the Cutters beat Auburn, 7-1, thanks to a five-run eighth inning.

Williamsport improved to 26-12 this season when its pitching staff allows three runs or fewer. It’s 5-29 when allowing more than three runs.

“It’s all about setting our team up to win,” said Burch, who lowered his season ERA to 1.56. “Just going out there and doing the best we can, I feel like that’s what we’re all doing.”

Doing the best he could was exactly how Burch got out of his sixth-inning jam. His first strikeout came after Landerson Pena and Cody Wilson hit back-to-back singles. After picking up his first strikeout, Burch turned to make a pickoff throw to shortstop Kendall Simmons at second base, the throw was wide and went into center field allowing both runners to move up. A wild pitch then allowed Pena to score to cut Williamsport’s lead to 2-1. But after walking Jake Randa, Burch found his rhythm.

The non-drafted free agent from Lewis-Clark State when to a full count on Onix Vega before catching him looking at strike three. He had a 1-2 count on J.T. Arruda before again getting a called strike three to end the inning.

In that moment, Burch could take a deep breath and reset. The mess on the basepaths was his own doing, and having gotten through it without allowing the tying run allowed Burch to spin three scoreless innings to end the game with his first career save.

“That was big for everybody,” Cutters manager Pat Borders said. “It shows he can do it himself. It shows our team that he didn’t fold in the pressure because there was a little pressure there.”

“It definitely got out of hand, but I felt like I had good damage control,” Burch said. “I was a little frustrated because I hold myself to high expectations. But once I figured everything out, I was all right.”

The only hit Burch allowed over the final three innings was a two-out double from Arruda in the ninth inning, and that was only after Johan Rojas nearly made an incredible catch at the wall. It was also after Williamsport had sent 11 batters to the plate in the eighth inning to score five runs.

Burch’s four solid innings followed the five shutout innings thrown by Victor Vargas to start the game. The two have worked in a piggyback situation with each other since Vargas was promoted to Williamsport in early August. When one starts the game on the mound, the other tries to finish it off. Last night that plan worked to perfection.

Vargas scattered four hits over his five shutout innings. It was his longest outing of the season, and his sixth scoreless outing in 11 appearances between Williamsport and the Gulf Coast League. Vargas was aided by a pair of slick double plays up the middle started by Simmons at shortstop. He also was helped by Rojas picking up his sixth outfield assist of the season when he threw out Randa at the plate to end the first inning.

And with the positive results Vargas posted, Burch wanted to keep the momentum going. It’s why that sixth inning was frustrating. But by allowing just the one run, he let the Cutters maintain the momentum it had built with RBI singles from Bryson Stott and Jake Holmes, the last of which where Corbin Williams scored from second on Holmes’ infield hit.

“The biggest thing I was able to reset,” Burch said. “Once I got back to the dugout, I mentally reset and was moving forward. I feel like a majority of where my success comes from is the ability to move forward and not get stuck in the past. I felt like I reset my mind and went out there and focused on my next pitch.”

If he had enough innings to qualify, Burch’s 1.56 ERA would be among the best in the New York-Penn League. He’s been one of the Cutters’ most consistent pitchers this season, drawing praise from Borders last night for the collective work he’s put in this year.

Burch will turn 22 on Monday. He’s got a three-pitch mix which he’s not afraid to use in any count, especially a fastball which sits between 91 and 93 mph and can be a swing-and-miss pitch up in the zone. His two strikeouts to end that sixth inning last night weren’t as much as the quality of his stuff as they were about the quality pitches he made.

“He utilizes that fastball and he can mix pitches when he wants,” Borders said. “That sounds pretty generic, but it’s pretty good for someone his age.”

“It’s always good to be put in high-pressure situations so you can learn how to deal with that going forward,” Burch said. “I can set up my fastball with my change-up and with my slider. And of all the things I’ve done this season, I think that’s what’s been able to help me the most.”

In high school wrestling, Montoursville won the Clearfield Duals with a 45-30 win against Benton on Saturday. ...

Locked in a tie-up, Waverly’s Trent Skeens had his hands wrapped around the back of the neck of Meadowbrook ...

Freshman Kenzie Reed drew a double team and threw a cross-court pass to the left side of the court, where a waiting ...

LEWISBURG — Avi Toomer and Bruce Moore both scored 15 points to help lift Bucknell to a 72-56 win over ...

Too much information is worse than not enough information. Turn on the Golf Channel and you will see many ways in ...