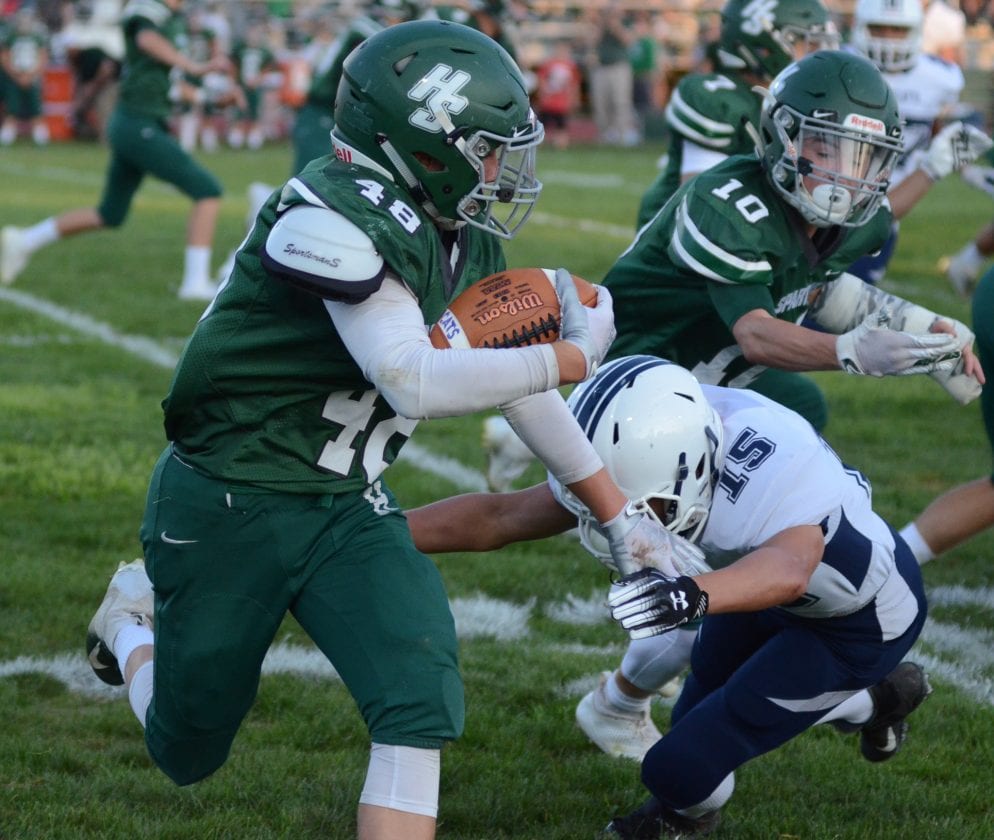 BRETT R. CROSSLEY/Sun-Gazette Correspondent Hughesville’s Brenden Knight returns a short kickoff during a game against Mifflinburg on Friday in Hughesville.

HUGHESVILLE – Hughesville was down to its third string quarterback when it needed to pick up a 4th-and-25 deep in Mifflinburg territory.

The Spartans subbed in Ethan Snyder for Jediah Webb as he was forced to take a play off after getting up slowly from a big hit. Snyder broke away from the line of scrimmage and launched a ball to the back of the endzone. Brenden Knight got by his defender and somehow made a circus catch many fans thought hit the ground. It didn’t.

Knight’s touchdown highlighted the opening half for the Spartans, but there wasn’t much else as a series of turnovers to open the second half doomed it to a 39-20, Week 1 loss to Mifflinburg. Hughesville will remain home next week as it welcomes in Montoursville.

“Our starting quarterback got hurt for a play and I basically said we are going to run a deep pass and throw it up,” Hughesville coach Adam Gehr said. “We had nothing to lose at that point. The field position was in our favor. If we didn’t complete it, we were still in a good position field position wise.”

Besides the long pass in the second quarter, the Wildcats will have plenty of positives to take into their matchup with Bloomsburg. Along with playing solid pass defense and recording his first interception of the season, Gary DeGroat, Jr. completed eight of 12 attempts for 87 yards and a touchdown. He also rushed for 63 yards and three touchdowns.

DeGroat, Jr. played like a quarterback working on another year of starting. He didn’t forced passes, found the open receivers, and showed little fear tucking the ball and putting his shoulder down. In the opening half he went toe-to-toe with a defender and took him to the ground after he pulled the ball down to run.

“That’s another year of maturity we’re seeing out of him,” Mifflinburg coach Jason Dressler said. “Maybe two years ago he’s forcing that ball somewhere. Now its maturity doing his job out there and reading the defense. He made some calls on his own that ended up being big in our favor. That’s that experience.”

DeGroat, Jr. got the ball to start and took Mifflinburg 61 yards down the field on nine plays. He relied heavily on the run game as Mason Breed carried the ball five times for 36 yards. He capped the opening drive with a one-run dive through the heart of Hughesville’s defense.

“That first drive did so much for us,” DeGroat, Jr. said. “Coming out and scoring right away gave us a lot of confidence throughout the game. We knew we could run the ball on them and that’s what we did.”

As a team, Mifflinburg carried the ball 38 times for 168 yards and four touchdowns. The lone score to come through the passing game for the Wildcats happened when DeGroat, Jr. hit Rylee Stahl, who also had an interception, for a short pass over the middle during the second quarter. Stahl then did the rest himself as he broke away from two defenders and rushed into the endzone for a 20-6 lead with 6:22 left in the opening half.

The score gave Mifflinburg room after the long pass to Knight pulled Hughesville within 14-0 of the Wildcats.

The Spartans, after the first quarter came to a close, leaned on Colton Yocum and Knight in the second quarter to move down the field. Once it became fourth-and-25 Hughesville threw caution to the win as it sent Snyder in for a pass to the endzone.

Snyder completed the pass when Knight extended his hands and snagged the ball out of the air moments before the defender came over to make a play.

The celebration was big, but so was the touchdown at the half by Mifflinburg.

STATE COLLEGE — Most coaches won’t admit publicly that one contest is a must-win game, even when it’s ...

STATE COLLEGE — The Penn State wrestling team picked Sunday to wrestle its most complete match of the season, ...

Sock/SJN rivalry should have been renewed awhile ago

All seats were taken and St. John Neumann had to close its doors as the final fans admitted stood throughout the ...

In high school wrestling, Montoursville won the Clearfield Duals with a 45-30 win against Benton on Saturday. ...