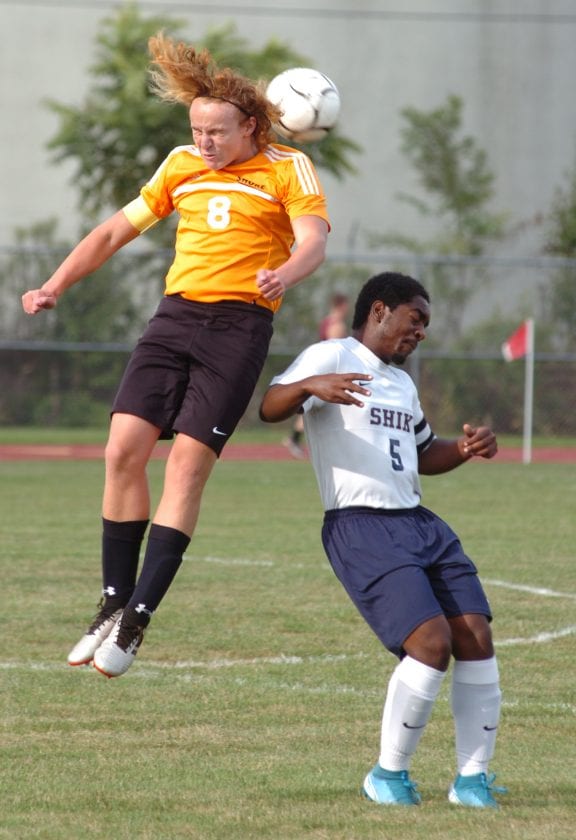 JERSEY SHORE — Doug Moore sat down with starting forward Parker Miller on Tuesday before Jersey Shore kicked off with Shikellamy in a HAC-I battle. The former Lock Haven University coach noticed that Miller wasn’t playing with the same confidence that he was displaying in practice.

So Moore and the senior stryker chatted for about 30 minutes and it was better than what any warmup could’ve done for Miller. He scored a career-best four goals, two in each half, to lift Jersey Shore to a dominating 6-1 win over Shikellamy.

“It feels really good because I haven’t scored this many goals before,” Miller said. “To make this contribution to the team feels good.”

Jersey Shore (3-3-1) has won two straight and three of four, and Miller’s play is a major reason why. Hunter Bierly, the Bulldogs’ leading scorer from a season ago, is out for the year with a ruptured ACL and MCL he suffered during a club soccer game in the summer. That left Jersey Shore without a go-to scorer, but if Miller keeps his confidence up, he might be able to fill that void.

“That’s the Parker we see practice every day. But often, several times in games leading up to (Tuesday), he’s lacked confidence, he hasn’t been the positive Parker that you saw there (Tuesday night),” Moore said. “Wonderful boy, wonderful family. He plays well but he’s a little bit after you and gives the ball to someone else. (Tuesday) he took charge. I told him to show everybody who you are and I thought he did that.”

Before Miller scored two consecutive goals, it was Eli Reibson who tallied Jersey Shore’s first score in the fourth minute when, after a failed clear, he lifted a perfect shot from 30 yards out over the out-of-position goalie. Miller scored the next two goals, the first when he dribbled through nearly the entire defense in the 26th minute, then two minutes later, Peyton Welshans knocked a perfect cross from deep in the corner where Miller’s low-liner made it 3-0.

“It felt like I was really connecting well with the right wing and that little triangle over in the left corner seemed like it was working too,” Miller said. “That led to at least two goals.”

After Alex Butzler scored early in the second half, Miller posted two more goals, including one in the final 10 seconds.

Jersey Shore played some of its best team soccer yesterday. Nobody tried to play hero ball and take on the Shikellamy defense on their own. The Bulldogs were strategic and found the open man, no matter who it was. As long they were open, they’d get the ball and teammates had the confidence that the right play would be made.

That team-first mentality led to a staggering 34 shots, including 15 on goal.

“I think we played a lot better. We came off a couple games from the weekend and I feel like we learned from them,” Miller said. “(Tuesday) we put it all together and it worked out.”

Butzler, another top returner from a season ago, missed the early part of the season but now is back and helping lead a dangerous position group.

Jersey Shore’s midfielders were a big part of the season-high six goals. Butzler and Reibson controlled the middle where it seemed like the Bulldogs won nearly every 50/50 ball and helped control possession for the majority of the game. Until late, Shikellmay had minimal opportunities and it didn’t even have a shot until the final 80 seconds of the first half, and that was outside of the 18.

Reibson and Butzler each had assists, as did Peyton and Riley Welshans. The middle four helped distribute from the back to the front, using short, accurate and quick passes to make their way up field.

“We work hard on it. At my age and where I’ve been and what I’ve done, I’m not into boot and chasing and boot and chasing,” Moore said. “… We all agree, we want to play. We’re about getting the ball down and trying to play and if it’s not good enough, God bless the other team and so be it. We’re not out here to just whack and chase and kick people. We do a lot of ball work in practice and a lot of keep ball and possession and technical work. We want to look like a futbol team. We don’t want to look like a load of cloggers.”