Montoursville proves too much for Bulldogs 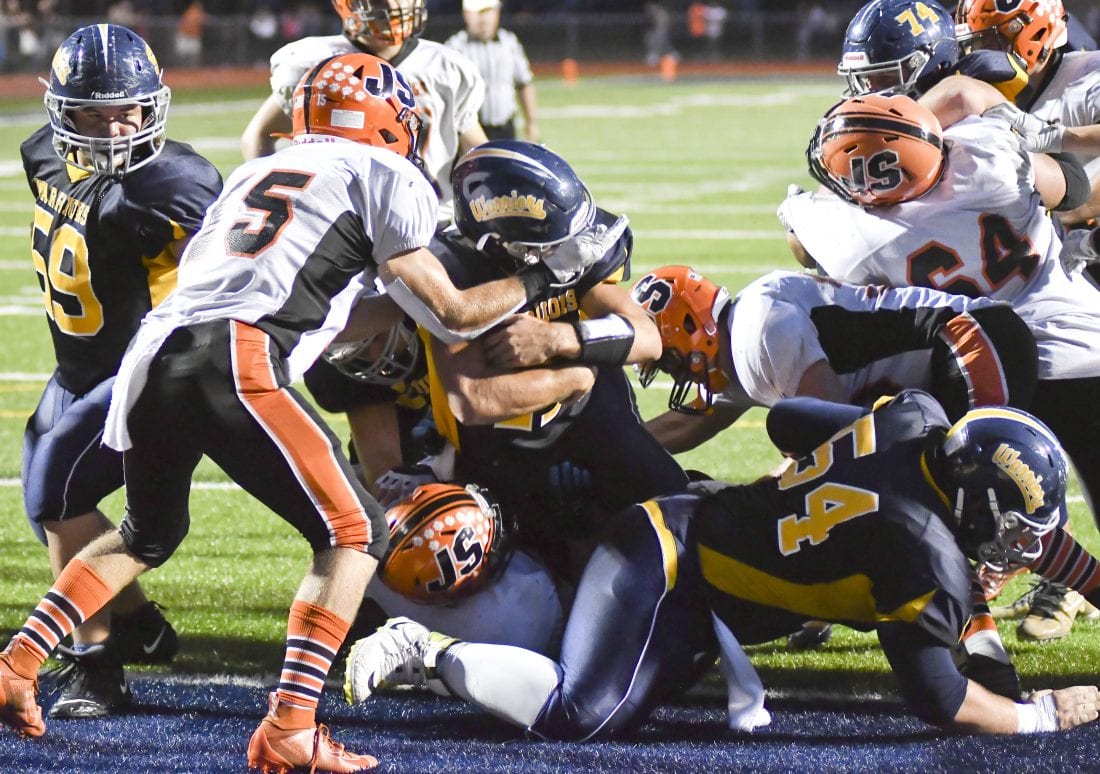 MARK NANCE/Sun-Gazette Montoursville’s C.J. Signor powers in in over the line for a touchdown in the second quarter at Montoursville against Jersey Shore.

The battle won, Montoursville center Jacob Stoner approached running back Rocco Pulizzi, then emphatically patted his back. It was a small gesture, but it meant a lot, the senior lineman acknowledging a sophomore who looks like a potential star in the making.

And it was that reciprocal relationship which helped Montoursville overwhelm a strong opponent Friday at Memorial Stadium. The line overpowered a terrific defense, Pulizzi ran for a career-high 208 yards and three touchdowns and Montoursville scored the game’s final 49 points as it defeated Jersey Shore, 49-12, in a showdown of undefeated defending District 4 champions.

It was a performance as complete as it was impressive with the Warriors owning the line of scrimmage on both sides of the ball, not allowing a point over the last three quarters and delivering an emphatic statement in its first 2019 test. Montoursville improved to 3-0, snapped a two-game losing streak against Jersey Shore and stymied a team that had scored 91 points in its first two wins.

“With Logan (Ott) and Jacob Reeder and those guys playing defense, it’s good giving them a break on offense and be able to run the ball,” Pulizzi said. “The line did a great job all week long. They were really working hard and it showed tonight.”

“We’re doing a really good job all together up front,” two-way starting lineman Will Carson said. “As long as our line does what it should we should do well with the weapons we have.”

They certainly did last night. Montoursville ran the ball at will, piling up 319 rushing yards and averaging 7.8 yards per carry. The Warriors did not have to throw the ball much, but were effective when doing so as the run set up the pass. Hunter Shearer threw for 100 yards, hitting Cameron Wood for a second-quarter touchdown and Dylan Moll with a 56-yard fourth-quarter scoring strike.

Still, it was Carson, Stoner, Travis Johnson, Joel Feleppa, Michael Dincher, Hunter Hanna and Wood who who changed the game’s complexion. Tanner Lorson scored on a 1-yard run and found Stanton Westlin for a 12-yard touchdown as Jersey Shore (2-1) took a quick 12-0 first-quarter lead. Montoursville stuck with it game plan and responded with a five-play, 65-yard scoring drive. Pulizzi scored on a 10-yard run, carrying the ball three times for the drive’s last 35 yards.

It was like watching that drive on replay from there. Montoursville scored touchdowns on six of its next eight drives, erupting for 21 second-quarter points and building a 28-12 halftime lead. The last six games in this annual series featured the team trailing at halftime rallying to win, but Montoursville stopped that trend in emphatic fashion, putting the game away on Pulizzi 39 and 60-yard third-quarter touchdowns. Montoursville did all this against a defense that shut out Selinsgrove last week, surrendering just one first down and 45 yards.

“We needed something there (down 12-0) or things might have been a little different,” Carson said. “We definitely needed that to get going.”

“We want to be two-dimensional and kind of be a little more balanced, but we’re going to take what the defense gives us and take our matchups and they were just mauling them up front,” Montoursville coach J.C. Keefer said. “When you have a fresh kid like Rocco that helps a lot, too.”

Jersey Shore runs a rapid-fire, no-huddle offense so Keefer opted to give Pulizzi the bulk of the carries since he does not play defense like Ott and Reeder. He showed promise as a freshman a year ago and burst onto the scene in a big way last night. Pulizzi ran hard, showed good moves and displayed some breakaway speed. He showed all three on a 60-yard, third-quarter touchdown run that ended the contest’s competitive phase.

Pulizzi was nearly tripped up in the backfield, but kept his balance, exploded through a hole cleared by fullback CJ Signor, beat containment to the edge and sprinted 60 yards untouched for the score. This came a series after he spun away from a defender at the 5-yard line and tip-toed the final five yards on an electrifying 39-yard score.

“I saw white coming at me so I cut back and found the hole and just took it,” Pulizzi said. “CJ did a phenomenal job blocking on through there.”

Montoursville’s defense was as stingy as its offense was explosive. The Bulldogs gained 128 yards while building their 12-0 lead, but produced just 122 from there. Following Jersey Shore’s second touchdown that was set up by Brett Guthrie’s interception, Montoursville allowed 45 yards on 25 plays and completely stuffed the running game, letting just two runs go more than three yards over the final three quarters.

Cornerback Dillon Young delivered one of the game’s biggest plays when he jumped a route and ran back an interception 22 yards for a touchdown that put Montoursville up, 28-12 in the second quarter. Lorson threw for 182 yards, but Montoursville consistently pressured him, kept him in the pocket and disrupted his throws. Wood and Zack Schmalhofer combined on a sack, Wood had four quarterback hurries, Moll intercepted a pass and Dylan Bennett added two tackles for loss. All this against an offense averaging 501 yards and 46 points per game.

“Jersey Shore is a good football team. You have to give credit to Coach Gravish and Coach Jackson and those guys over there for doing what they’re doing,” Keefer said. “Lorson is a great athlete. If you get him out in space he’s going to hurt you. That first drive he busted one out, but after that he wasn’t able to get going and we had someone in his face all the time and we were hitting him.”