Warriors fall at home in 2 OT to Wilkes 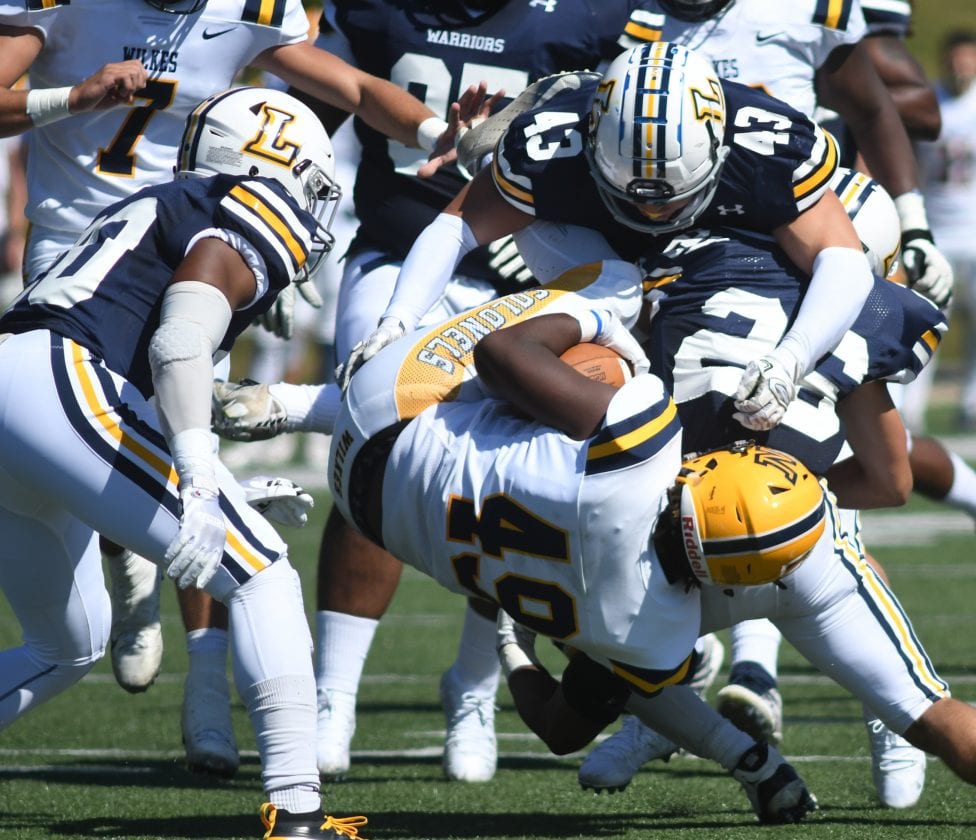 RALPH WILSON/Sun-Gazette Correspondent Wilkes’ Jeremiah Acker (49) is brought down by Lycoming’s Jase Wright (43) and Austin Rowley during a college football game on Saturday.

Jonathan Drach just smiled. He wasn’t about to reveal whether or not he was planning to go for a touchdown in double overtime on fourth down inside the Lycoming 5-yard line.

Colonels quarterback Jose Tabora ran into the end zone from 4 yards out to make Drach’s looming fourth-down decision moot. When Wilkes linebacker Bud Moyer intercepted his second pass of the game four plays later, the Colonels had a 24-17 win over Lycoming at David Person Field it tried again and again to give away to the Warriors. Instead, it moved to 3-0 for the first time since 2009.

Lycoming lost by one score or fewer for the 16th time in its last four-plus seasons playing without starting quarterback Elijah Shemory, who was out with an injury to his right hand. Backup quarterback Chase Snavely completed 19 of his 30 attempts for 183 yards in his first start since playing in the PIAA Class AAA championship game in 2016. But of his three interceptions, one was thrown on each of the Warriors’ two overtime possessions, the last of which ended the game.

“You have to find a way to win that game,” Lycoming coach Mike Clark said. “When we hold them to 17 points in regulation, the defense did their job. Even though we gave up some yards, you allow 17 points, you have to win the game. And that’s on me and the offense for not producing.”

The question posed to Drach about whether or not he would have gone for a touchdown on fourth down came after Wilkes kicker Alexander DeSpirito missed a pair of potential game-winning field goals in the game’s final minutes. His 31-yard miss wide right came on the final play of regulation. DeSpirito then lined up for another chance at a winning kick in the first overtime and hit the right upright with a 32-yard attempt.

It was DeSpirito’s third miss of the day after missing from 41 yards on the final play of the first half. But Lycoming was able to capitalize on neither miss. Snavely threw an interception on the first play of overtime on a brilliant diving catch by linebacker Gabe Allgyer. And when DeSpirito missed his overtime kick, the Warrior defense allowed a third-down conversion from Wilkes before Tabora ran 4 yards for a score on third-and-goal for the eventual game-winning score.

“You can’t ask for a kicker to miss that many field goals in a game and then don’t capitalize,” said Lycoming receiver Christoff Minott, who caught three passes, including a touchdown. “We couldn’t ask the defense to play a better game than they did. (Wilkes) has a good quarterback over there playing his behind off and we held them to 17 points in four quarters? We have to put more points on the board to help our defense.”

In his 12 years at the helm of Lycoming, Clark’s teams have made a point to profit off of defensive performances like the Warriors’ yesterday. Yesterday was the 53rd time under Clark his defense held an opponent to fewer than 20 points in four quarters. It was just the seventh time they lost.

And it lost largely because the offense wasn’t able to take advantage of the few opportunities it had with the football in its hand. The Warriors’ 10 possessions averaged just over five plays in length. Just two possessions lasted at least 10 plays, and only one ended in points as kicker Jamie Fisher connected from 30 yards to move him just two field goals behind the school’s career record of 30.

The Warriors’ first touchdown came on a two-play possession after David Tomb forced a fumble on a kickoff and Jarrell Payne returned it to the 10, setting up Snavely’s 1-yard TD sneak. And the second came on a four-play drive which finished with a 47-yard touchdown pass from Snavely to Minott, who had run past the cornerback to get free down the sideline.

But that was all the damage Lycoming could do offensively. Three drives ended in punts — Michael Coe averaged 43.7 yards per kick — three more ended in interceptions, and another ended in a turnover on downs when tailback Joey Guida was dropped for a 2-yard loss on fourth-and-1 in the second quarter. That was a microcosm of the Warriors’ day running the ball in general as they averaged 2.5 yards per carry against a stout Wilkes front four which has the Colonels second in the Middle Atlantic Conference in rush defense.

“Controlling the front and not letting teams run the ball and making them one-dimensional has been a huge advantage for us,” Drach said. “We have three seniors and a junior up front and they play with a lot of heart and they’re really tough kids.”

“You have to be able to run it some and we were ineffective running the football,” Clark said. “We knew their front was good and people have not had success running it, but you have to, at some point, establish something in the running game. We kept trying to stick it in there, but the reality is we threw it more than 50 percent of the time, which is a really hard way to win.”

A week after allowing 11 pass plays of 20 yards or more, the Lycoming defense got burned again early thanks to Tabora, who completed 65% of his passes for 332 yards. He had separate completions of 41, 22 and 34 yards just in the first quarter, the last of which led to Nick Yanik’s 7-yard touchdown run.

But the Warriors allowed just two more passes of 20 yards or more the rest of the game. Instead, Tabora and the Wilkes offense was content to pummel Lycoming with intermediate routes which kept drives alive and kept the Lycoming offense off the field. Nearly 35% of Wilkes’ plays went for first downs, and six of its 10 drives lasted at least eight plays.

“This still isn’t good enough,” said Lycoming defensive end Duane Boone, who had six tackles. “There’s still improvements we have to make. I need to make a lot of improvements. There’s plays we let get away from us that could have been gamechangers.”

TURBOTVILLE — Looking up to a 6-foot-6 Ethan Hartman and a 6-foot-5 Kade Anzulavich and trying to gain rebounds ...

LHU wins at home by 7 in women’s basketball

LOCK HAVEN — Coming off a big win on the road at Bloomsburg, the Lock Haven University women’s basketball team ...