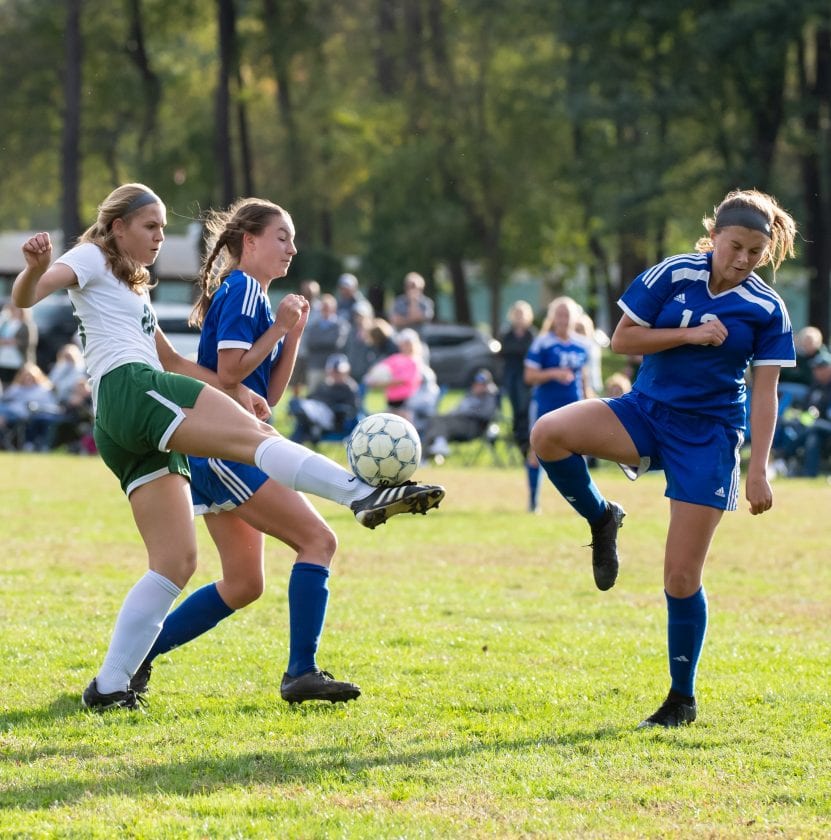 All season long, Hughesville coach Alecia Gold stresses to her team that if they make a mistake or let up a goal, she wants to see how they respond. And the way Gold wants the Spartans to respond is simple: score a goal.

That’s precisely what Hughesville did Tuesday. Every time South Williamsport scored a goal to cut the Spartans’ lead, Hughesville quickly responded and build its lead back up.

It resulted in a 6-3 win at South Williamsport to put Hughesville within a game of clinching a playoff berth.

The Spartans are now 8-5-1 and South Williamsport is 7-6, having a five-game winning streak snapped.

“I think it was very important (to keep a two-goal lead). We gathered up after goals and we talked about what we did wrong and we fixed them and we proved that coming back out and scoring again to keep that two-goal lead,” Hughesville senior Morgan Hopkins said.

Hopkins was enormous for Hughesville, scoring four goals — three in the first half — and causing problems for the Mounties’ defense to contain. The senior came out and scored twice in the first seven minutes of the game, her first goal coming from just outside of the 6-yard box and sending a nice shot to the far right post for the 1-0 goal. Two minutes later, she scored inside of the 18.

“Morgan’s a great senior leader, on and off the field, and she’s just so strong to the ball and she wins the ball when we’re not sure she’s going to come up with them,” Gold said. “It’s just great to have a person of that skill and that talent that can be a leader for us.”

“I couldn’t do it without my midfield. CC Getz is a really strong midfielder and helps feed the forwards great balls,” Hopkins said. “I think we did a good job coming out strong. We had a big win against Mount Carmel, so we kind of had that momentum and we kind of put some in early and it give us a win.

Haley Neidig scored on a great direct kick from 22 yards out taht she send low to the left post to make it a 2-1 deficit, but it was then Kaylin Hicks from outside of the 6 near the corner to send in a ncie shot to the right post to make it a two-goal lead, 3-1, with 19:19 in the first half left.

Neidig came up big again, dribbling to just outside of the 18 with 4:26 left to score past the right post and cut the deficit down to 3-2. Hopkins though gave Hughesville huge momentum by scoring as time expired in the first half to put the Spartans ahead, 4-2, with a shot to the right post from inside of the 6.

“They’re a good team, you can’t make critical mistakes. We made critical mistakes at the wrong time,” South Williamsport coach Marc Lovecchio said. “… We gave up three goals when we never should have and we just made mistakes. I’m not taking anything away from them, they played better than us. They deserved to win. We weren’t at our sharpest today.”

Neidig again made it a one-goal deficit when she scored seven minutes into the second half from just inside of the 18 to earn a hat trick and make it a 4-3 game.

It was again Hopkins who countered, scoring from inside of the 18 just to the right of the goal’s center to make it a two-goal game and keep South Williamsport from tying the game and possibly shifting momentum against the Spartans.

While she did have a hat trick, the Spartans knew they had to try to contain a dangerous player like Neidig and not let her get too many open looks at the goal.

“Neidig’s a great player and we had some defensive tactics that worked out well on her. I mean she still put some great balls in the back of the net, but she’s a great player that we were able to contain somewhat,” Gold said.

“They made some adjustments from last game, their box played really strong,” Lovecchio said. “Haley’s a great player. She scores three goals again them, which is amazing, but we need other players to contribute too. We just weren’t sharp. It was just one of those games.”