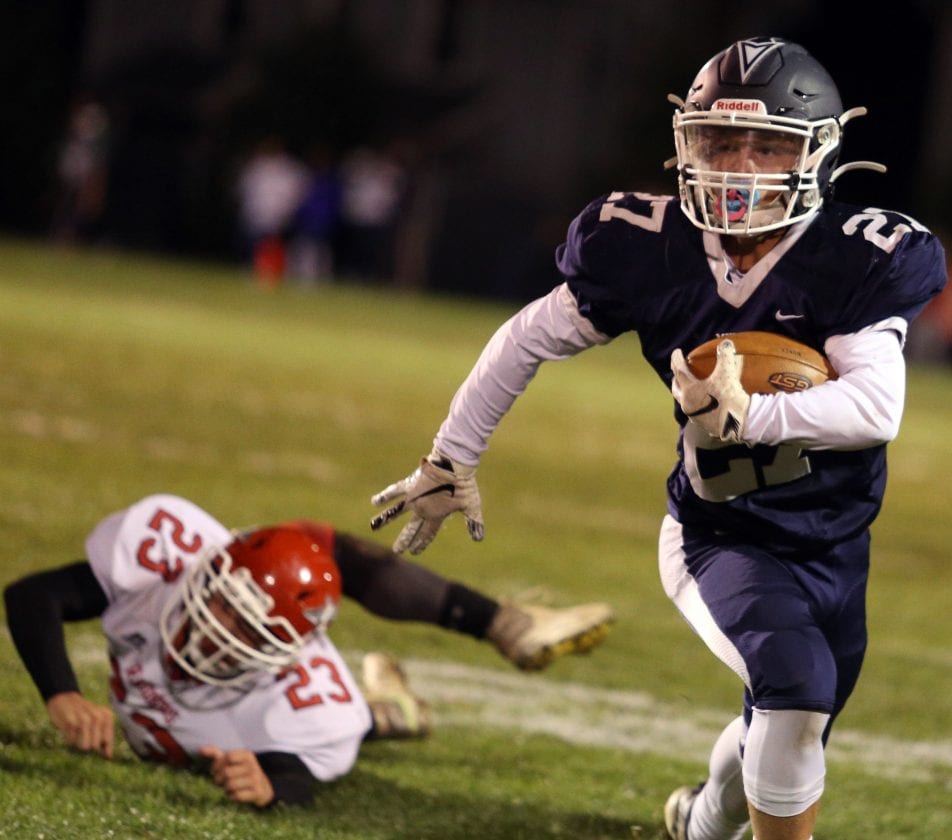 MUNCY — As Montgomery students and players celebrated a year ago, Muncy players seethed. They bottled up those emotions and, as Friday’s Old Shoe rematch approached, called upon those feelings again.

Then Muncy unleashed all that frustration, rage and desire. Two and a half hours after the game started, Muncy had flipped the script. This time the Indians jubilantly grabbed, then raised the Old Shoe Trophy into the chilly night air as happy classmates stormed the field and literally jumped for joy. Those returning players waited an entire year for another shot and when the moment came, they owned it.

Ethan Gush ran for a career-high 149 yards and three touchdowns, Christian Good made two-game changing second-half plays, Ross Eyer caught a 67-yard touchdown and the defense dominated as Muncy defeated Montgomery, 27-7. The Indians (4-3, 3-0 NTL-II) won the Shoe for the 14th time in 15 years and took a huge step toward earning a District 4 Class A playoff berth while dealing the Raiders’ playoff hopes a serious blow.

“We’ve been waiting the whole year. The whole year we’ve been thinking about playing them again,” Gush said. “It feels great. It sucks losing it last year, but we got it back and we worked for it and we took it back.”

“All they wanted us to do was come out here and do what we did and win the Shoe back,” Eyer, a freshman, said. “It was really exciting. We were really hyped in the locker room.”

Muncy turned that hype into production, dominating the line of scrimmage on both sides and wearing down a quality opponent that had looked impressive in consecutive victories. The Indians ran for 256 yards, surrendered just 146 total yards and built a 13-0 halftime lead.

Still, the game’s pivotal play was one that does not show up in the boxscore. Although Muncy was controlling the game, Montgomery made some timely stops and kept hanging around. Kaide Drick stripped a runner and returned a fumble 13 yards to Muncy’s 38-yard line late in the third quarter. Suddenly, a dormant offense came to life and Drick’s 4-yard touchdown run capped a well-balanced, six-play scoring drive that made it 13-7.

Just when it seemed like this Old Shoe game might again come down to the final minutes, Good changed the game’s complexion. The senior returned the ensuing kickoff 40 yards, setting up Muncy at the Montgomery 35-yard line. That momentum Montgomery just created was stifled and the Indians needed only four plays to again make it a two-score game as Gush’s 4-yard touchdown put Muncy up 20-7 in the third-quarter’s final minute.

A series later, Montgomery moved into Muncy territory, but Good came up big again. This time he did it defensively, covering Steve Prince like a blanket and intercepting a pass at the 18-yard line.

“We have Christian Good back there for a reason,” Muncy coach Sean Tetreault said. “He’s a great athlete and we know if we get the ball in his hands enough he’s going to break a big play and it was great to see it on a special teams play. That was great for a confidence booster.”

Good’s plays provided a spark and the offense fanned the flames. Offensive linemen Dakota Haueisen, Mason Hillman, Travis Fogleman, Isaac Harris and Cael Hembury took over the game in the second half and were overpowering as Muncy put the game away with an 11-play, 82-yard scoring drive. Muncy utilized a game plan that would make Woody Hayes smile throughout the second half and Gush and Paul Pepper (77 yards) ran fast and hard.

Gush was a difference maker all night and his determination was encapsulated on what bruising eight-yard run during that game-clinching drive as he carried a group of defenders for all eight of those yards. Gush repeatedly gained yards after contact and his 11-yard touchdown through a wide hole gave Muncy a 20-point lead midway through the fourth quarter and allowed the fans who jammed the bleachers the rest of the game to savor the victory.

“I want to run as hard as I could for the team and it showed,” Gush said. “We were working as a team. That’s all you can ask for. We’re all together cheering for and supporting each other.”

“Our line came in pumped up. This is the most pumped up and excited I’ve seen our line. I can only imagine if they do this every game, the great things they can accomplish,” Tetreault said. “Those guys paved the way for those backs tonight and it was great seeing Ethan running hard.”

Eyer, too, played a big role in opening up that running game. The dynamic freshman continued making highlight-reel plays and his 67-yard touchdown catch from cousin Branson Eyer opened the scoring late in the first quarter. Branson (135 yards) rolled right and lofted a pass deep into the air. Ross was covered well, but high-pointed the ball at Montgomery’s 30, spun away from the defender and went the final 30 yards untouched as Muncy took a 7-0 lead.

Eyer has 13 catches this season and eight have gone for touchdowns. That big-play ability had Montgomery double teaming Eyer throughout the final three quarters and took one more defender away from the ball as Muncy surged forward on the ground.

“That’s what coach wants me to do and that’s what I’m good at it so I’ll continue to do it for my team,” Ross Eyer said. “It just gave me a rush. I love this sport. Doing something like that in a game like this is really big.”

So was Muncy’s defense.

Montgomery ran for 195 yards in last week’s 14-3 win against Nativity but never could get its running game going against Muncy’s swarming defense. Muncy forced punts on the first eight Montgomery possessions and six of those were three-and-outs. Montgomery produced 50 yards on 21 first-half plays as the defensive line clogged holes and players like Gush, Nate Palmatier (4 catches, 68 yards, 7 tackles) and Bailey Hadzinikolov became tackling machines.

The Raiders mounted one last threat following Muncy’s final touchdown and had a first-and-goal at the 9-yard line, but Muncy pushed it back two yards on the next four plays and Good broke up a fourth-down pass in the end zone.

Montgomery played hard and never backed down as Evan Strausbaugh and Devon Deem each made eight tackles. Still, this night belonged to Muncy. And now so does the Shoe Trophy.

“Last year we lost on that 2-pointer at the end of the game and that left a bad taste in their mouths,” Tetreault said. “Those guys that came back from last year wanted to avenge that on their home field. It’s exciting to see them achieve that and now we just want to build on that and keep getting better going into playoffs.”