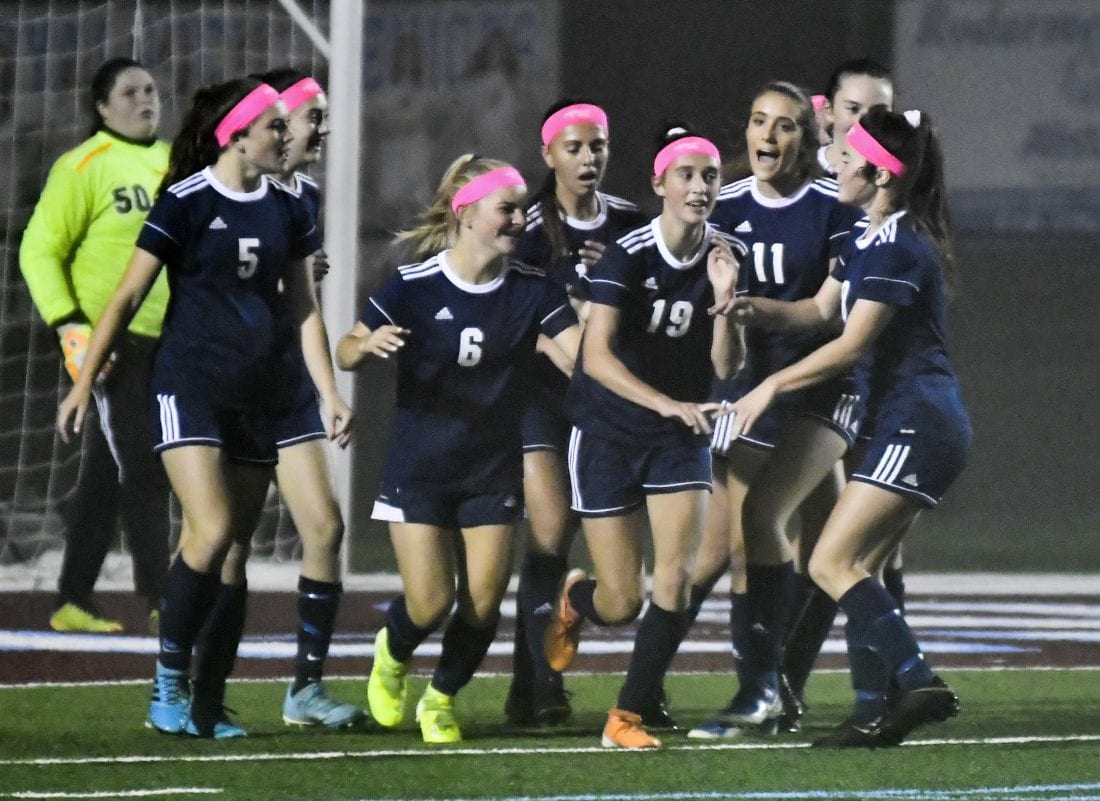 Lily Saul knew that she had a handful of Milton defenders around her. She didn’t have a lot of time to think in that moment, just try to quickly make a move and hope to keep possession. So from just outside of the 6-yard box, Saul quickly stopped and cut backwards, allowing her for a brief moment to get around one of Milton’s defenders.

That’s when Saul took her chance and fired a shot.

Saul buried it perfectly in the upper right 90 and quickly turned with both her arms in the air to celebrate with her teammates.

The perfectly-placed shot helped give Montoursville a little breathing room en route to a 2-0 win against Milton to open the District 4 Class AA playoffs at Loyalsock’s Kenneth M. Robbins Stadium on a foggy Tuesday night.

“She has good speed and good skill and she just has it in her head to take players on,” Montoursville coach Vic Gorini. “We want her to connect a little bit more with the other forwards, but she often will just go at the defense on her own.”

The second goal was one that Saul executed perfectly to get into position.

The Montoursville sophomore scored the first goal of the game as well to put the Warriors ahead early, 1-0. From just outside of the 6-yard box, Saul took a great shot past Milton goalie Kamryn Snyder toward the near left post to sneak it in for the goal.

“The first goal’s always huge. It gives you a real mental boost,” Gorini said. “So that was a big deal scoring before they did.”

Milton had it’s chances to score throughout the game, but just couldn’t get a great shot off when it needed to.

Entering the game, Milton coach Rod Harris knew that Montoursville’s defense was extremely solid. The likelihood of Milton getting a through ball past Montoursville’s back line and into the 18-yard box was about as likely as the sun not rising in the morning. Rather, Harris and the Black Panthers knew they had to generate chances from 20 and 25 yards out. But Milton didn’t get too many of those chances.

The Black Panthers had just two shots on goal, both coming in the second half.

Janae Bergey fired a shot from 25 yards out near the corner of the 18 that was sent right toward Montoursville goalie Avery Zales for an easy catch. Milton had another shot from a similar distance, only to see it blocked by Zales.

“We just couldn’t generate those shots for some reason. First half, we had a lot more opportunities than we did in the second half,” Harris said. “All season long it’s been like that. We get 1-on-1 breakways and we put it in the keeper’s gut, we hit the cross bar, we hit the side post. It’s just been one of those seasons.”

One of those first-half chances came with 11:30 to play when Milton had a direct kick from 40 yards out and sent it inside of the 18, only to see it cleared out by Montoursville’s defense. The Black Panthers also had a nice give-and-go from just inside of the 18, but the shot went slow and wide to the right before Montoursville got it out.

“Our defensive line has been solid all year,” Gorini said. “They give up very few shots in the box. We couldn’t be happier with our defensive back line.”

The Warriors did a good job limiting Milton’s Janae Bergey and Leah Bergey and not letting the two dangerous Milton players get open looks and opportunities or use their speed against Montoursville.

The Warriors held an 8-2 shots-on-goal advantage and overall, fired 11 shots to Milton’s two.

Milton was in the postseason this year for the second consecutive year after eight consecutive losing seasons and no playoff berths. It’s a step in the right direction for the program, which Harris is hoping continues to not only get into districts every year, but competes for another district title. Milton hasn’t won a girls district championship since 2008.

Montoursville advances to the district quarterfinals Thursday against Lewisburg at Millville at 7 p.m. It’s the seventh consecutive year the Warriors have advanced to at least the quarterfinals of districts. Gorini knows it will be a tough game matching two solid defenses against one another against the Green Dragons.

“I expect them to have their typical game (with) a lot of possession in the midfield, and that’s a weak area for us,” Gorini said. “We’ll have to make some improvements. It’ll be a tough game. It’s a game we can win, but we’ll have to play well. We’ll have to play better than we did (Tuesday).”