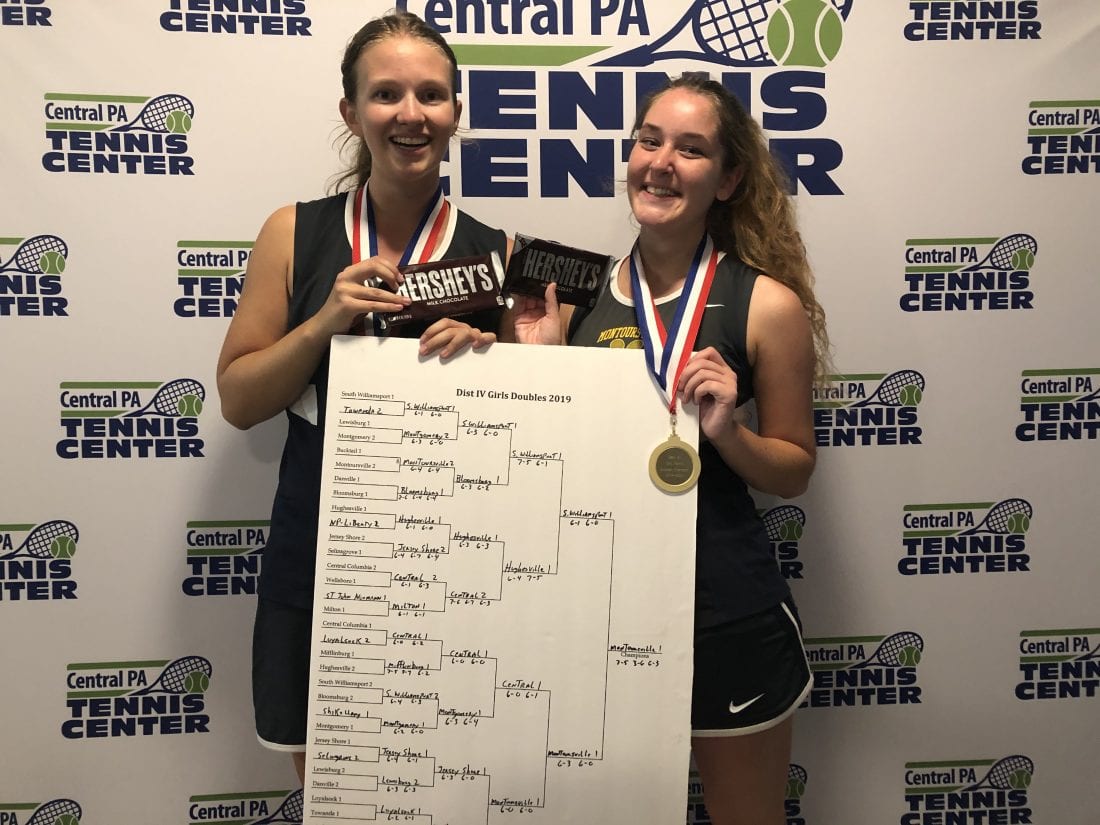 One thing was clear Monday as Montoursville’s doubles pair of Lydia Barbour and Rei Saar competed at the District 4 Doubles Championships and that was drive.

Barbour displayed leadership and guidance throughout the championship match as Saar, who just started playing tennis at the beginning of the season, competed on pure athleticism. Both were outstanding. Both combined to make the perfect team as they claimed the championship with a 7-5, 3-6, 6-3, win over South Williamsport’s Lily Summerson and Lauren Peck. Both teams advance to the PIAA Doubles Championships on Nov. 1 at the Hershey Racquet Club.

The opening set was heavily contested, but Montoursville proved to have a little more as Barbour and Saar claimed the first set 7-5. The Mountaineer girls got right back at it to open the second set winning five consecutive games. Montoursville eventually dropped the set, but not before it was able to come back and take three games.

It worked for Montoursville as the group took the first two games of the third, and decisive, set. It seemed to help both players as they fought off Summerson and Peck throughout the final set.

“I’ve been playing a little over four years now and I’ve had these high-pressure situations,” Barbour said. “Being able to just tell her (Saar) we’ll take it just one point at a time.”

The group looked poised throughout the final set, claiming a 6-3 win to give Montoursville its second consecutive District 4 Doubles Championship. A year ago, Barbour teamed with Maddy Reeves to claim the district title

Saar certainly didn’t look like a player who just picked up a racket at the beginning of the season. In the third round of the tournament Saar started to find her way, directing shots and being more aggressive. Her athletic abilities were on full display Monday as she got to lob shots and drop shots all over the court.

“I play with my brother sometime, but we’ve never done anything competitive,” Saar said. “I just wanted to try out tennis and it turned out to be really fun. Halfway through when I started playing doubles, I started to find a groove. I had a really good partner. She was really fun.”

Saar made her postseason debut with Barbour on Saturday as the No. 2 seeded doubles team in the district. Trial by fire might be an understatement, but she quickly adapted to the competition to help advance.

South Williamsport seemed to rely on the long lob shots, forcing both Montoursville players to the baseline. Both Saar and Barbour were forced to play long shots. It made charging the net and sending back shots with any type of speed difficult.

Barbour adjusted to the strategy in the first set. She started hitting lower shots hard to the baseline, which made it difficult to pop up and send a lob back at the Warriors duo. Barbour was good at playing the ball to her racket and finishing with hard shots.

“You don’t think about the stupid shots you make, because I make plenty of bad shots,” Saar said with a huge smile. “You just have to keep telling each other to not let it get in your head. What means something is down on the court and you have to get your head directly in game. You can’t think about anything else.”

South Williamsport’s Summerson and Peck continued to stay with the strategy and it started to work in the second set. The group took the first five games of the second, putting the pressure squarely back on Montoursville as it attempted to closeout the match.

Summerson and Peck kept in constant contact throughout the match, stopped between points to go over their plan. They communicated well throughout the second set and the results were there at they forced a third with a 6-3 win.

Montoursville didn’t go down without a fight in the second set. After falling behind 5-0, Barbour and Saar rallied to take three games. One went to deuce, but Barbour and Saar were able to pull it out. Summerson and Peck then got refocused to close out the second set and set up a third set for the district crown.

Hughesville’s Carlee Pepper and Riley Emerick advanced into Monday’s semifinals after a difficult day last Saturday in the early rounds of the tournament.

Pepper overcame an injury and Emerick played solid throughout the day to reach the semifinals. Once there, the group was charged with taking on the top seed in Summerson and Peck. Both South Williamsport players pushed the tempo to advance to the finals with a 6-1, 6-0, win over the Spartans.