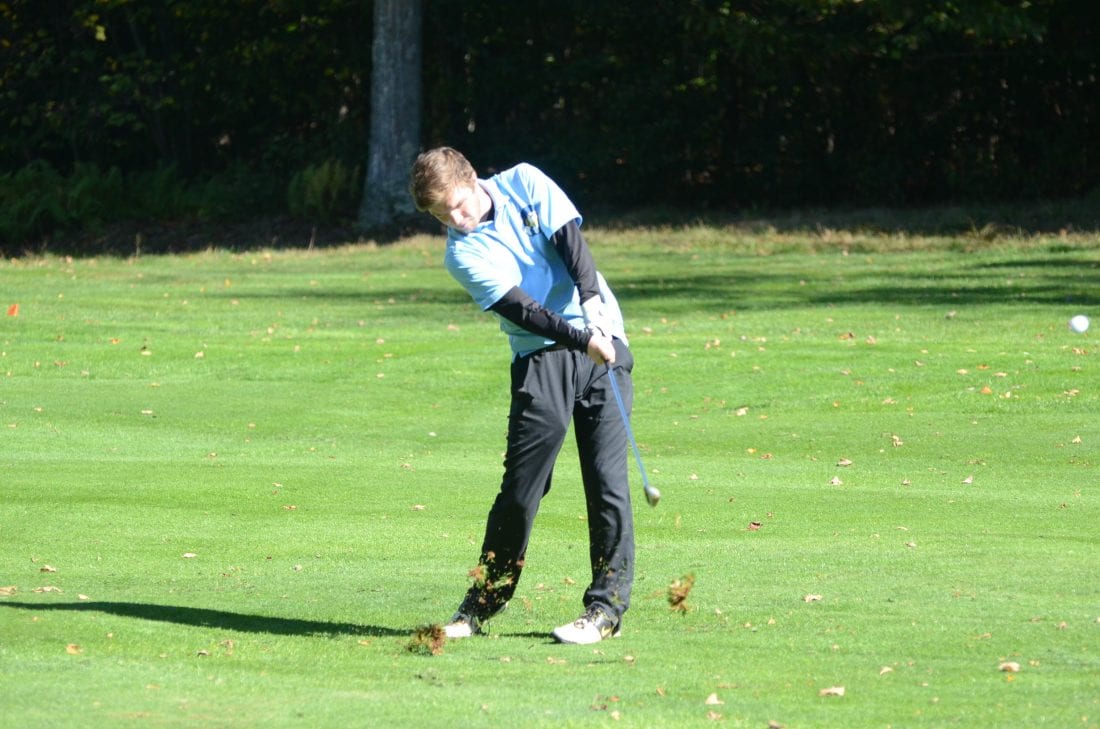 EAGLES MERE — Peyton Mussina survived the opening-day conditions at the Eagles Mere Country Club and remained in contention for a top finish at the District 4 golf championships Saturday afternoon.

Mussina was in a competitive group that featured Austin Outman (Cowanesque Valley), Sean Kelly (Lewisburg), and Ty Morral (Wellsboro). It was the leading group after the opening day as Outman posted a 78 and Mussina tied with a handful of other golfers with an 83. Outman was last year’s champion.

Mussina shot a 90 on the second day and finished with a two-day total of 173 to qualify for the regional tournament. He was a little disappointed with his second-day total, but he will have a chance to improve with at least one more tournament guaranteed.

“I didn’t perform really well, at least how I wanted to,” Mussina said. “When you play with a bunch of guys that have the same score you just look to do the best you can in the group and play your game.”

Mussina posted three birdies over the two-day tournament with one coming in the final round Saturday. He opened with pars on three of the first four holes, but then posted a bogey and double bogey to fall off Outman’s pace.

Wellsboro’s Joseph Propheta and Morral finished second and third, respectively. Outman repeated as the AA championship with a two-day total of 153.

Brewer hit an outstanding drive off the No. 11 tee. He then followed the shot with a great approach to reach the grass to the right of the hole. He chipped his way out of the rough and onto the green. He then hit a long putt two-feet from the hole and finished it with a tap in for a five.

Brewer birdied the final hole on the opening day and finished with two pars on the second day.

Lewisburg’s Sean Kelly entered the second day of the District 4 Golf Championships tied with a handful of golfers, but still in contention.

Kelly was featured in the final group with Cowanesque Valley’s Austin Outman, who lead after the first with a low of 78. Kelly was next in line with a group of players who all posted an 83 after on the first day despite less than ideal conditions for golf.

“I’m not too happy with the way I played,” Kelly said. “It was a tough course. It could have been worse. I honestly thought the course was easier today. I just hit it better Friday than I did today. I just had a lot of confidence Friday that I didn’t have today.”

Kelly looked like he would be able to advance after his first day, but the struggles of the second day put him in a position to watch the scoreboard at the end in hopes of advancing. He wasn’t the only golfer frustrated as the pin locations seemed to give everyone a little trouble on the second day.

Lewisburg’s Nick Mahoney posted a two-day total of 176. He finished with a 95 the first day, but challenged during much more favorable conditions on the second day to finish with an 81.

“I did pretty well today to come back from yesterday,” Mahoney said. “The wind wasn’t as bad and you didn’t have to shape your shots as much. My goal was to do better than yesterday.”

Lewisburg’s Ava Markunas posted a two-day total of 196 to edge Cowanesque Valley’s Skylar Smith to claim the top spot in the AA field. She dropped six shots from her day one total and played a much cleaner round to beat out Smith. Mifflinburg’s Kaylin Foss finished third with a two-day total of 203.

Loyalsock’s Mia Patterson, Grace Shaible and Cassie Gee swept the top three spots in the AAA field. Patterson finished with a combined 189 over the two days to win the tournament. Shaible was behind her with a 208 and Gee finished with a 211.