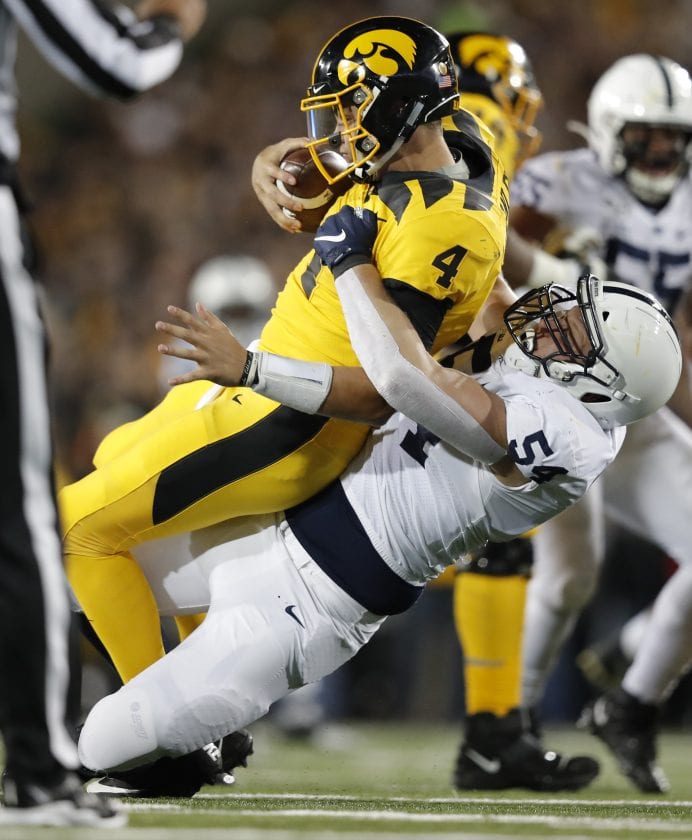 IOWA CITY, Iowa (AP) — Noah Cain ran for a five-yard touchdown with 5:17 left and 10th-ranked Penn State held off No. 17 Iowa, 17-12, Saturday night, its first win over a ranked opponent this season.

A matchup between two of the nation’s top defenses turned when Iowa’s Nate Stanley threw an interception near midfield with 9:22 remaining. Penn State drove 35 yards on a gassed Iowa defense, and the last of three straight runs by Cain made it 17-6.

Iowa pulled within 17-12 when Stanley found Brandon Smith for a 33-yard TD pass with 2:31 to go. The Hawkeyes’ two-point try failed though, and Cain converted a crucial third down that ensured that Iowa never saw the ball again.

Up 7-6 late in the third quarter, Penn State recovered a fumble at Iowa’s 16 and Sean Clifford connected on an apparent touchdown pass to Pat Freiermuth that was overturned on review. Iowa then held the Nittany Lions at the 1-foot line, and two straight holding calls forced them to settle for a 33-yard field goal.

KJ Hamler caught seven passes, including a 22-yarder for a TD, for Penn State.

Stanley threw for 286 yards, but the Hawkeyes ran for just 70 yards on 30 attempts.

The Nittany Lions survived their toughest road challenge outside of a trip to Ohio State on Nov. 23. Penn State was on the road against a talented team with a jacked-up crowd, and yet the Nittany Lions were the ones making the plays that made the difference.

The Hawkeyes nearly went back-to-back games without a touchdown.