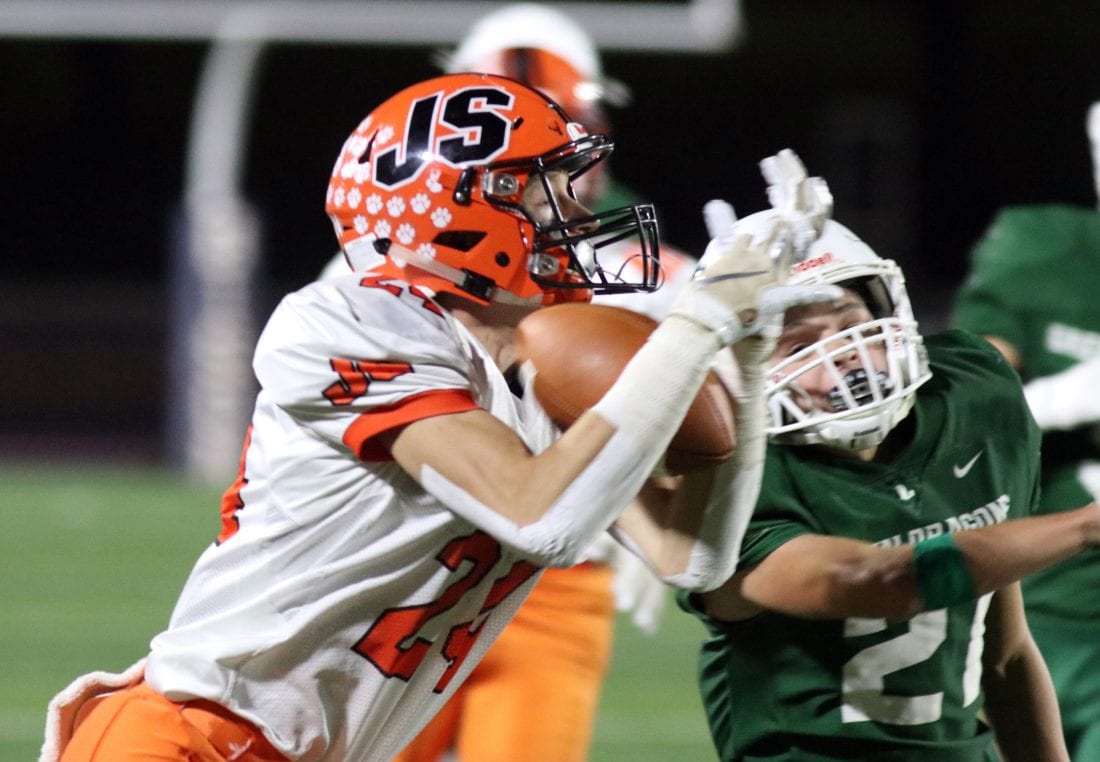 KAREN VIBERT-KENNEDY/Sun-Gazette Jersey Shore’s Cayden Hess catches a pass for a touchdown as Lewisburg’s Cam Michaels tries to break it up during a game Friday at Bucknell University.

LEWISBURG – Tanner Lorson played three sports as a junior, but never forgot about football. Even while playing basketball and baseball, Lorson remained a constant weight room presence. He and his fellow receivers then attacked the offseason the way they do opposing defenses.

All that effort, all that dedication produced one prolific performance Friday night at Christy Mathewson Stadium as Jersey Shore captured another championship.

Lorson threw for a career-high 391 yards and four touchdowns, Cayden Hess caught eight passes for 153 yards and the defense collected seven sacks as Jersey Shore defeated Lewisburg, 47-21, and won a share of a second straight HAC-I championship. The Bulldogs (5-3, 4-0) can win the title outright if they defeat Central Mountain in two weeks.

So was Jersey Shore’s passing offense.

Lorson threw for 315 yards by halftime as Jersey Shore built a 25-14 lead. He also ran for a team-high 68 yards, finishing with 457 total yards. Stanton Westlin caught two touchdowns and Hess and Owen Anderson had one each.

The 391 yards passing were the most by an area quarterback since 2014 and Lorson became only the second player in more than 100 years of Jersey Shore football to go over 2,000 yards in a season. He fired three first-half touchdowns, then clinched the win with a perfectly-placed 13-yard, fourth-quarter touchdown to Westlin.

“We saw it coming throughout the second half of last season and in basketball you could see it, too. Tanner sees the field really well and he was in the weight room every day,” Jersey Shore coach Tom Gravish said. “He took on a different approach to working out. He’s a really hard worker and he did a lot of throwing all summer and he’s having a great year and those receivers really put in the work, too.”

It showed all night. Jersey Shore needed just 94 seconds to strike first, as Lorson capped an 80-yard game-opening drive with a 28-yard touchdown to Anderson. Lorson closed the first quarter with 201 yards, then found Westlin and Hess with 22 and 23-yard second-quarter touchdowns as Jersey Shore erased a 14-13 deficit and went up to stay.

Each touchdown revealed why this passing game has become so dynamic. Lorson put the passes right where they needed to be and both Hess and Westlin ran quality routes before making good catches.

“It’s a lot of fun being a receiver in this offense and having us throw the ball around and know that you’re going to have a chance to make plays,” Westlin said. “We have good communication with Tanner. We know where we we’re going and where the ball needs to be placed and he’s really good with throwing it. Just knowin that he’s putting it in the right place and I can go up and get it gives you a good feeling.”

The good feelings were not limited to offense. While Jersey Shore produced 547 yards, the defense often stifled a high-powered offense that had helped Lewisburg (5-3, 3-2) win four straight games. The Bulldogs constantly harassed four-time 1,000-yard passer Nick Shedleski and Anthony Shaffer (6 catches, 60 yards) intercepted two passes, including one in which he perfectly read a fake punt try and returned it 25 yards for a first-quarter touchdown.

Shedleski threw for 173 yards and went over 5,000 for his career, but he rarely had time to scan the field and inflict major damage. He did connect with Jack Landis on a 47-yard first-quarter touchdown and Ethan Spaulding turned a screen pass into a 51-yard third-quarter touchdown that pulled Lewisburg within 31-21. Take those two plays away, however, and Jersey Shore allowed 140 yards on 36 plays.

“I love watching the defense,” Hess said. “Every time we get a sack the sideline just lights up.”

“We wanted to get a couple knockdowns and some hurries. My goal was let’s see if we can get 3-5 sacks and any time you can get seven and some hurries in there too, that helps a lot,” Gravish said. “Hopefully we can keep that up. The defense does a great job and Lewisburg is a tough offense to get ready for.”

Lewisburg made a big special teams play to take its only lead when Hagen Persun blocked a punt and Owen Ordonez returned it 10 yards to put Lewisburg up 14-13 early in the second quarter. Jersey Shore quickly struck back and a Lorson to Sechrist 68-yard pass set up Hess’s go-ahead touchdown.

And that blocked punt was one of the few blights on another wise strong special teams performance. Anderson twice pinned Lewisburg inside its 5-yard line. He also returned a kickoff 36 yards and Cameron Allison returned one 65 yards as the special teams played a prominent role in setting up 15 points.

“Owen is doing a phenomenal job punting and he and Cam Allison doing what they did on kickoffs gave us a big boost,” Westlin said. “Cam’s kickoffs and Owen punting well and making them go a long way is a strong factor for us.”