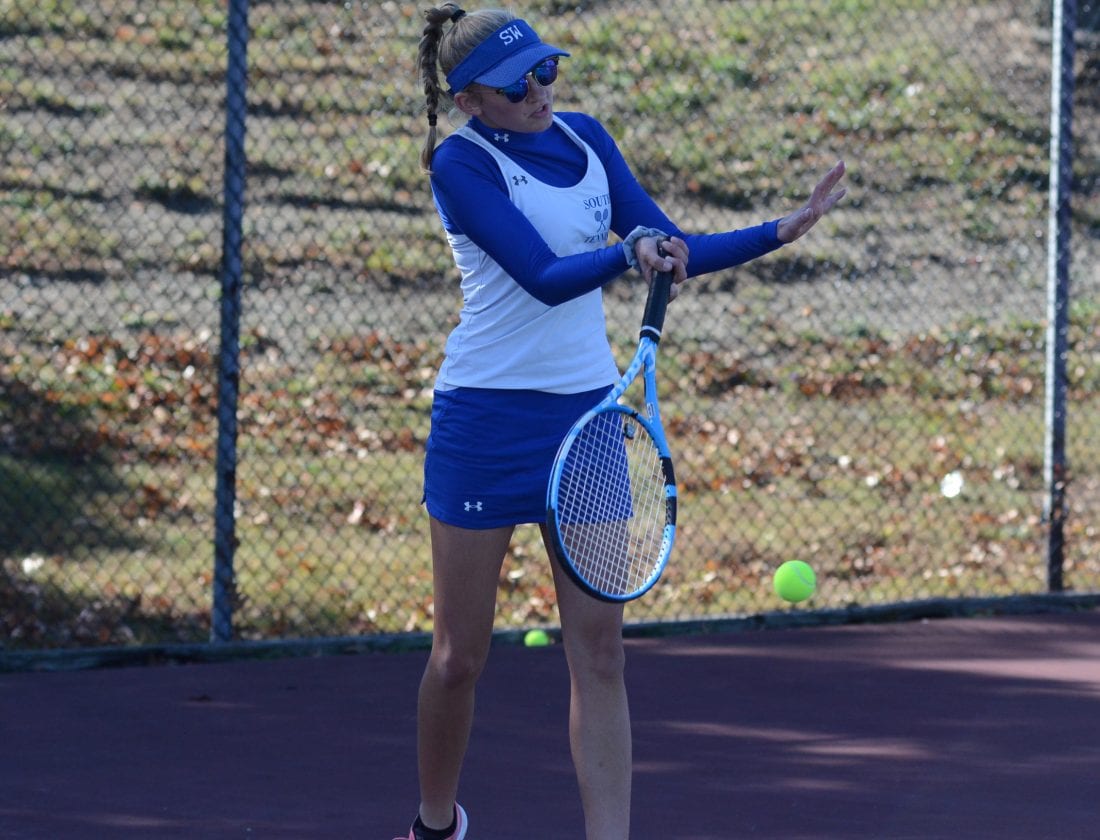 BRETT R. CROSSLEY/Sun-Gazette Correspondent South Williamsport’s Lily Summerson connects with a strong return shot during the opening round of the District 4 doubles tournament at Williamsport on Saturday.

South Williamsport’s duo of Lily Summerson and Lauren Peck represented the top doubles pair of the District 4 doubles tournament and they lived up to the pairing Saturday at Williamsport.

They opened with a straight set win over Towanda’s No. 2 pairing. They then beat Montgomery’s second pair of Emily Wolfgang and Clara Ulrich in straight sets. The duo finally defeated Bloomsburg’s Dana Lee and Brooke Keister, 7-5, 6-1, to reach the semifinals.

“It takes us just a second to read and figure things out, because we aren’t doubles players,” Summerson said. “It feels good that we won confidently. It was just nerves and figuring things out. We’re strong enough to get it done.”

South Williamsport won the league title, sent three girls to the singles semifinals with Olivia Dorner claiming the top spot and won the district title. Summerson and Peck reaching the semifinals is just another notch in the team’s belt as it heads into multiple state tournaments.

“We’d love to win,” Summerson said of Monday. “We just want to go out and play confidently and win strongly. We just want to stick together as a team.”

Milton’s pair of Hannah and Haley Seebold entered the tournament as a top seed and delivered a win before falling to Central Columbia’s Adrianna Rakaulkas and Isabella McHugh, 7-6, 6-7, 6-3.

For Haley, who started tennis a year after her sister, it was an honor just to be able to help her twin in the tournament.

“I started playing tennis a year after Hannah and being here with her is very important to me as well,” Haley Seebold said. “I’m honestly so proud of myself. Hannah is an incredible tennis player. I really wouldn’t want to be a doubles player with anybody else. I never thought I would get to a point where I could help her out. Now that we were here and I was helping her out on some of those points it really makes me feel good.”

Haley did more than just help get points as the pair advanced with a 6-1, 6-1 win over St. John Neumann’s Maria Helminiak and Juliana Krinner.

Hannah and Haley have been nothing but class since taking on the multiple postseason tournaments required of tennis players. Both have been outstanding all season. Hannah earned the No. 3 seed in the singles tournament and the pair were seeded for doubles.

“I remember when she told me she wanted to play tennis,” Hannah Seebold said. “Everybody in my family has also asked about the doubles team and today we actually did it. It was pretty good. I couldn’t get the ball over the net my freshman year. I just got lucky I had a twin that would always hit with me.”

“Early on we had a good first match,” Barbour said. “We had a much tougher second match, but we were able to pull through which shows a good team. Our third match we wanted to go in and get things done which we wanted to do.”

Barbour and Saar won their final match in straight sets to set themselves up for a good showing in Monday’s semifinals.

“It definitely gives us confidence going in knowing we can play top level tennis,” Barbour said.

For Saar, who just came out for tennis at the beginning of the season, it was different. She felt the nerves early, but leaned on her teammate throughout the matches to gain confidence and hit good shots.

“She’s really like the best partner you could have,” Saar said. “It’s great. When I heard I was even going to districts, I was in complete shock. When we got the second seed there was a little pressure to say the least.”

Other winners to advance out of the preliminaries included Kylie Vasvinder and Amber Leitzel (Mifflinburg) and Keirsten Strohecker and Anne Norris (Shikellamy). Maria Helminiak and Juliana Krinner moved into the opening round with a 10-1 win over Diana Dawes and Emma Eglesia (NP-Liberty).