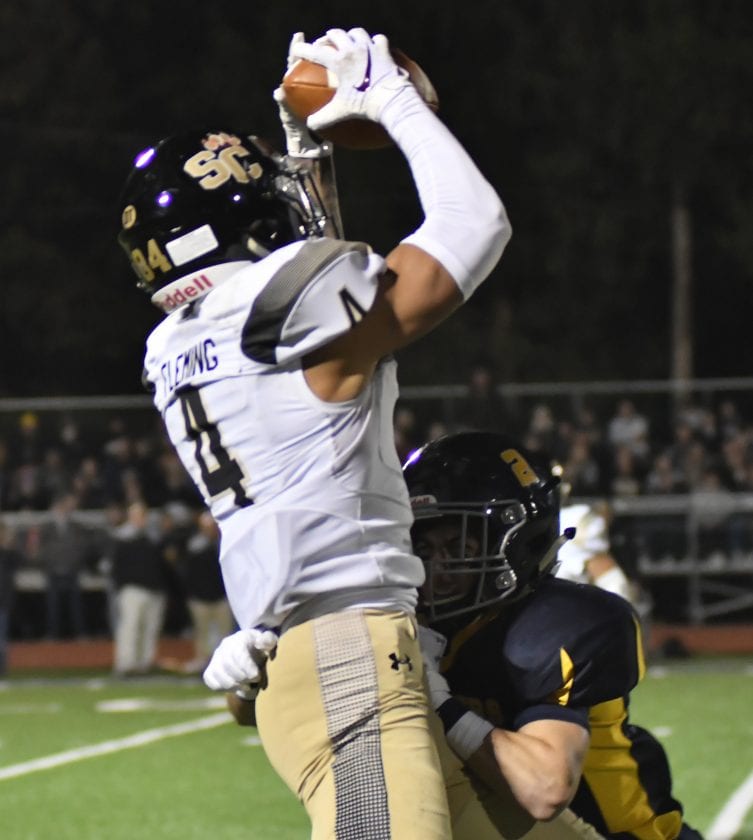 MARK NANCE/Sun-Gazette Southern Columbia’s Julian Fleming (4) is hit by Montoursville’s Dylan Moll (2) as he makes a reception in the first quarter at Montoursville on Friday. The Tigers won, 35-0.

Dillon Young was on Julian Fleming’s hip. The two were hand-fighting as they ran down the Memorial Stadium turf toward the goal line.

Young was the latest Montoursville defensive back tasked with following Fleming around the field. Fleming, well, the Southern Columbia senior doesn’t particularly need an introduction. He’s the nation’s top-ranked high school football recruit and the first wide receiver to ever ascend to the No. 1 spot on ESPN’s recruiting rankings.

When the football got in their general vicinity, it ended up in Fleming’s hands. All Young could do was try to rip it away as the two tumbled to the ground. Fleming rose to one knee and nodded at his approaching teammates.

When recounting the touchdown play following a 35-0 loss to Southern Columbia on Friday night, Montoursville coach J.C. Keefer could only shrug. What else was there to do? His kid did his job against maybe the best high school football player District 4 has ever produced.

“We covered him!” Keefer said incredulously. “Dylan Moll and Dillon Young both covered him. We’re on his hip. I can’t be upset about that. We’re not going to see anybody else like that.”

Fleming caught seven passes for 124 yards and two touchdowns last night. Gavin Garcia ran for a team-high 126 yards, including a dazzling 82-yard touchdown. And his older brother Gaige gained 116 yards. And it was all about as ho-hum for the Tigers as you would expect.

Montoursville was merely the next name on a list of overmatched teams which have lined up across from Southern Columbia this season. Last week the Tigers dismantled then third-ranked Wyoming Area to the tune of 42-0. Last night’s 35-point win was the smallest margin of victory for Southern this season. But don’t be fooled by that number. This game wasn’t that close.

A Warriors team which had outscored opponents by more than 300 points coming into last night’s game, gained just 81 yards of offense, and 89 of those yards came after halftime. It was an offense which played without Jacob Reeder, Logan Ott and Moll because of injuries, but there wasn’t exactly much time for quarterback Hunter Shearer to throw as he had defenders in his face before he finished his drop back. And there was even less room for running back Rocco Pulizzi, who often found nothing but a pile of bodies at the line of scrimmage.

“It’s an eye-opener for us,” Montoursville linebacker Dylan Bennett said. “We’re not as good as we think we are and we still have a lot of things we can improve on. It’s going to motivate us in practice going forward.”

“We’re playing a good team, but if you execute, you’ll play well,” Southern quarterback Preston Zachman said. “You can’t really get overconfident because it’s just one week at a time and the next team on the schedule can come out and smack you in the mouth, so you have to do the same thing over and over again.”

There’s no defense which can curtail the throw Zachman made to Fleming with Young on his hip for a 42-yard touchdown last night. No defense can match the strength, speed and athleticism combination of Fleming when he caught a bubble screen, stiff-armed a defender to the ground, won a race to the goal line, then was able to dive and stretch the football inside the pylon for a 15-yard touchdown.

All the scheming in the world wasn’t going to stop Gavin Garcia on a third-quarter touchdown run which saw him traverse most of Lycoming County before finding a convoy of blockers led by Fleming and Zachman.

Sometimes it’s appropriate to just tip your hat to a better team, and that’s exactly what Keefer did following Friday night’s loss. He praised his team’s effort because the Warriors were certainly not lacking any of that.

“I don’t want to make it sound like I’m pleased or happy, because it stings to lose and I hate to lose,” Keefer said. “But this is going to help us in the long run. It’s hard for these kids to understand that now, but this will help us be a better football team when we get to where we want to get to, and that’s winning a district championship and making a state run.”