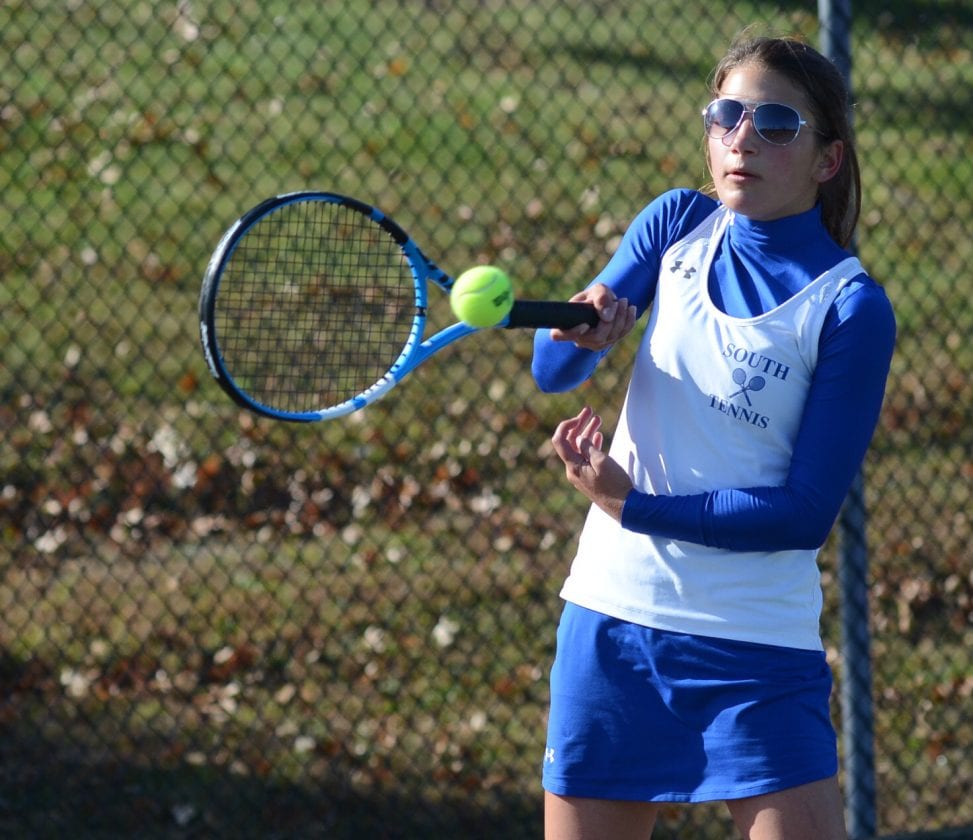 BRETT R. CROSSLEY/Sun-Gazette Correspondent South Williamsportâ€™s Lauren Peck hits a return shot during a match at the District 4 Singles Championships in Williamsport on Monday. Peck was one of three Mounties to reach the semifinals.

It was no surprise to see South Williamsport’s Olivia Dorner and Lily Summerson reach the District 4 tennis semifinals Monday. Dorner is the tournament’s top seed and Summerson was seeded sixth.

But Mounties teammate Lauren Peck, well even she couldn’t believe she had joined her teammates in the semifinals. That’s exactly where she is, though, after upsetting a pair of seeded players to reach the district singles semifinals.

South Williamsport made up 75% of the remaining players after the first day of the tournament Monday. Only Loyalsock’s Katie Savidge, a two-time District 4 runner-up and former state fourth-place finisher, was able to crash the South Williamsport semifinal party. The tournament’s No. 2 seed, Savidge won a pair of matches in straight sets to reach the semifinals.

“I never expected this since I was No. 3 singles player,” Peck said. “I feel so proud of myself and I feel like all my hard work has paid off.”

Peck was one of only two unseeded players to reach the quarterfinals of the tournament, joining Bloomsburg’s Emily Keyser. But it didn’t stop her from taking out some of the district’s best players.

She opened with a 6-0, 6-0, win over St. John Neumann’s Maria Helminiak before defeating fourth-seeded Lydia Barbour of Montoursville, 6-4, 7-6. Peck’s toughest match came in the quarterfinals where she needed three sets to best fifth-seeded Melina Vuocolo of Loyalsock, 6-4, 4-6, 7-5.

South Williamsport is the first school in District 4 history to have three players reach the singles tournament semifinals.

“Each person I played had a different style and I had to adjust,” Peck said. “It was really hard to figure out to begin with, but it came down to just trying to get one more ball than they did. I was super tired, especially after playing so many hours. My arms and my legs hurt. I was constantly trying to get every single ball back.”

Dorner, a returning state third-place finisher, has dropped just one game all year. The sophomore continued that dominance Monday, winning 6-0, 6-0, in both matches to reach the semifinals where she’ll face Peck.

“It feels really good. I’m playing really well right now,” Dorner said. “Pretty much everything has been working. All the work we’ve put in is starting to pay off.”

Savidge is the only player this season to win a game against Dorner, and she opened with a 6-0, 6-0, win over Mifflinburg’s Abby Underhill, who defeated Lewisburg’s Hannah Castellan in the opening round of the tournament.

Savidge cruised by Underhill as her other strongs shot were falling as well. She moved by Underhill to setup a match with Keyser, who knocked off Montgomery’s Saige Whipple in the opening round.

“I was really nervous going into the first match,” Savidge said. “After I got that one, I felt more confident going into the second one. I just wanted to hit better and get more serves in.”

Summerson faced a difficult draw as the tournament’s sixth seed. She took on Selinsgrove’s Dasiy Ettinger in the second round. Ettinger won four games in the first set and another two in the second set, but just couldn’t keep up with Summerson, who advanced to play No. 3 Hannah Seebold out of Milton.

Seebold reached the quarterfinals with a 6-0, 6-3, win over Central Columbia No. 1 singles player Tessa Gill.

“It felt really good to pull that one off,” Seebold said of the win. “It was a lot tougher than when I played her during the regular season. She definitely improved a lot for districts. She’s just such a sweet girl in general. I wouldn’t have wanted to play anyone else.”

Seebold won the opening set against Summerson, but just couldn’t contain South Williamsport’s No. 2 singles player. Summerson appeared to get stronger as the match progressed and won the final two sets to take the match, 2-6, 6-2, 6-3. Summerson improved on last year’s result where she fell in the quarterfinals.

“I expected my third-round match to be a tough one,” Seebold said. “Lily (Summerson) is a really smart girl. That’s just the way it goes.”