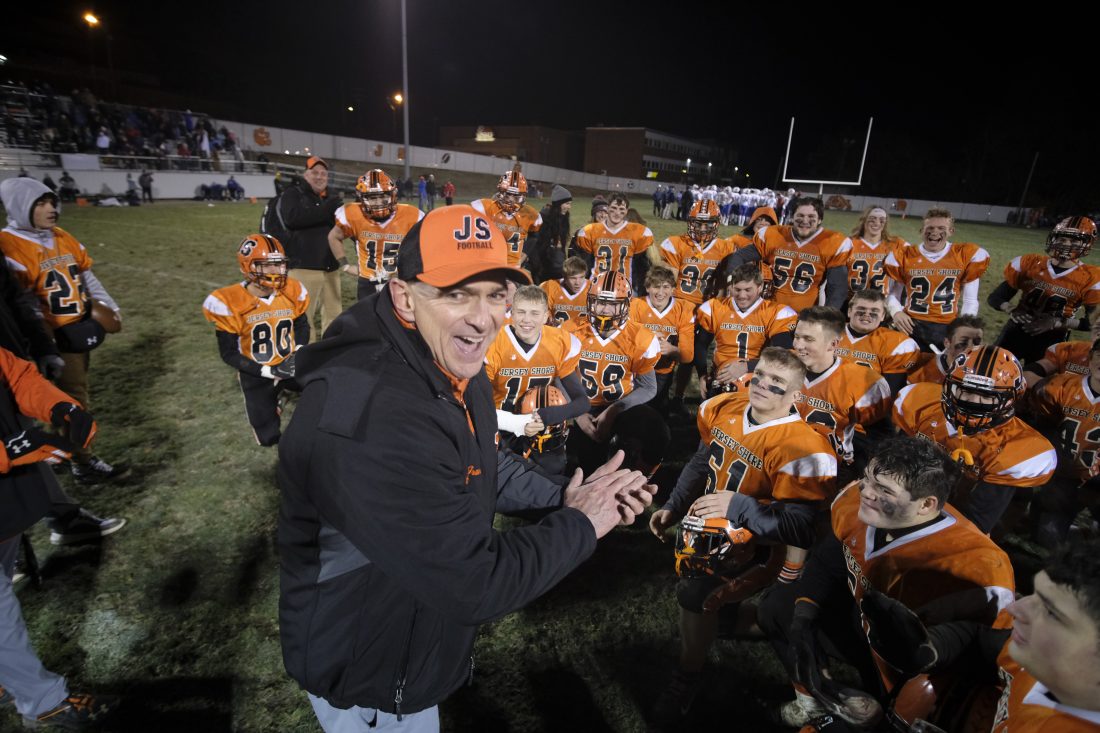 Temperatures hovered near 20 degrees but it did not matter. It felt like the entire town lined the streets, standing and loudly cheering as the bus traveled down North Main Street and Allegheny Street. More jubilant fans greeted players and coaches as they departed the bus. This was a hero’s welcome and grateful residents showered their players with praise following their dramatic 42-35 triple overtime Class AAAA state quarterfinal win against Pottsville.

There was a time when a scene like this only existed among Jersey Shore football players’ imaginations. Jersey Shore fans could only dream that something like this would happen. Only a Hollywood writer could produce a script like this.

But this was all real. The miracle has happened. Jersey Shore is just one victory away from playing for a state championship.

Jersey Shore faces District 2 champion Dallas tonight at Danville in the state semifinals. The winner heads to Hershey next Thursday and plays for the state title.

Think about that. Jersey Shore went 16 years between capturing district championships before winning the 2013 Class AAA title. It went 17 years between winning seasons, ending that streak in 2014. And Jersey Shore opened this decade going 2-28 the first three seasons. That included going 0-10 in 2012.

Now the Bulldogs have built an elite program, one that has produced four district championships and three league crowns in the last seven years. Now, Jersey Shore has become one of the state’s four best teams.

Remarkable sometimes is an overused adjective. But this turnaround truly is remarkable. There is no way anyone could have envisioned this kind of ascent coming seven years ago. Improvement, yes. Becoming one of the state’s top teams? No way.

This program was so dormant for too long. From 2008-2012, Jersey Shore did not win more than two games in a season. A four-year stretch before that 2013 championship included a 3-37 record.

That 2013 season was the turning point. Jersey Shore started 2-6, but caught fire late in the season, went on the road to beat the top two seeds in districts and won that improbable championship. The lasting legacy of that 2013 team goes beyond the championship it won. It was about the belief it instilled. The culture changed and Jersey Shore became a program that did not wait for something bad to happen. Its teams started taking the field each week expecting to win.

Jersey Shore has not endured a losing season since, playing in six of the last seven district finals. It also has won three district titles in four years and back-to-back district and HAC-I championships.

Despite all the success, Jersey Shore entered 2019 as an underdog. The Bulldogs made huge in-season strides a year ago, overcoming a slow start, going 7-6 and winning another district title. The problem was that several starters on both sides of the ball graduated. That included all-state defensive tackle David Tomb, all-state linebacker Hunter O’Conner and four-year starter Koby Peacock, a player who produced nearly half the team’s receptions last fall.

The non-conference schedule included games against Southern Columbia, Montoursville, Mount Carmel, Bald Eagle Area and Bellefonte. Only Mount Carmel did not win a district championship, but all five won at least 10 games and both Southern and BEA also are playing in their respective state semifinals tonight. Just matching last year’s seven wins seemed like it could be difficult.

The players and coaches never thought that way. They did not focus on what was lost, but what was still there. Then they did what the previous six Jersey Shore teams did. They attacked the offseason hard, approached each practice like it was Friday night and kept improving each week. Jersey Shore has won seven consecutive games and 10 of its last 11 since starting 2-2. Included in that stretch was a 42-0 Week 9 win at Class AAA state semifinalist BEA.

Jersey Shore finally made its state tournament breakthrough when it defeated District 1 champion Bishop Shanahan, 33-14, and recorded the program’s first state tournament victory. And yet the Bulldogs still were perceived as underdogs entering last Friday’s game against Pottsville. That status was reinforced when Pottsville scored on its first three possessions and built a 21-0 first-quarter lead.

Early in this decade, that kind of start would have doomed Jersey Shore. The way it fought back and started pushing around the District 11 champions symbolically destroyed any lasting images of these Bulldogs mirroring the teams that once struggled so much. It truly was a team effort with so many players in all three phases making big plays in the most pressure-filled situations. So many times Jersey Shore was a play from defeat and so many times it fought off the ropes. The Bulldogs then delivered the knockout blow in the third overtime when Tanner Lorson hit Brett Guthrie for the go-ahead touchdown and Guthrie followed with a diving interception on the ensuing Pottsville possession.

“We always like to hear, ‘tackle by a bunch of Bulldogs.’ That’s what we always go for. That’s the name we like to hear, not the individual name,” linebacker Dawson Sechrist said. “When you make a big play and the crowd starts roaring everyone gets pumped up from there. It’s awesome. I love it.”

What once seemed impossible became reality and the party was just getting started as jubilant coaches and players embraced at midfield. It continued a few minutes later as fans who packed the Danville bleachers and stayed loud even when things looked so bleak flooded the field and joined in. It then hit its climax when seemingly the entire town wrapped its collective arms around these talented, tough and resilient Bulldogs.

Just imagine what could happen if Jersey Shore wins tonight. Of course, Jersey Shore takes its usual place as underdog entering the game. Dallas (14-0) is undefeated, survived a rugged District 2 field and is coming off a big win against perennial state power Imhotep.

“We want it so bad,” Guthrie said. “Everyone on this team wants it so bad.”

“Our motto has been we’re going to have fun,” Gravish said. “We want to have fun and play our brand of ball.”

Jersey Shore has produced a brand of football that once seemed so far-fetched. They have become the Hickory Huskers, the New York Knights, the Mighty Ducks and the Little Giants rolled into one. Fiction has become truth and all things seem possible.

Chris Masse covers high school football and may be reached by email at cmasse@sungazette.com. Follow him on Twitter at @docmasse.