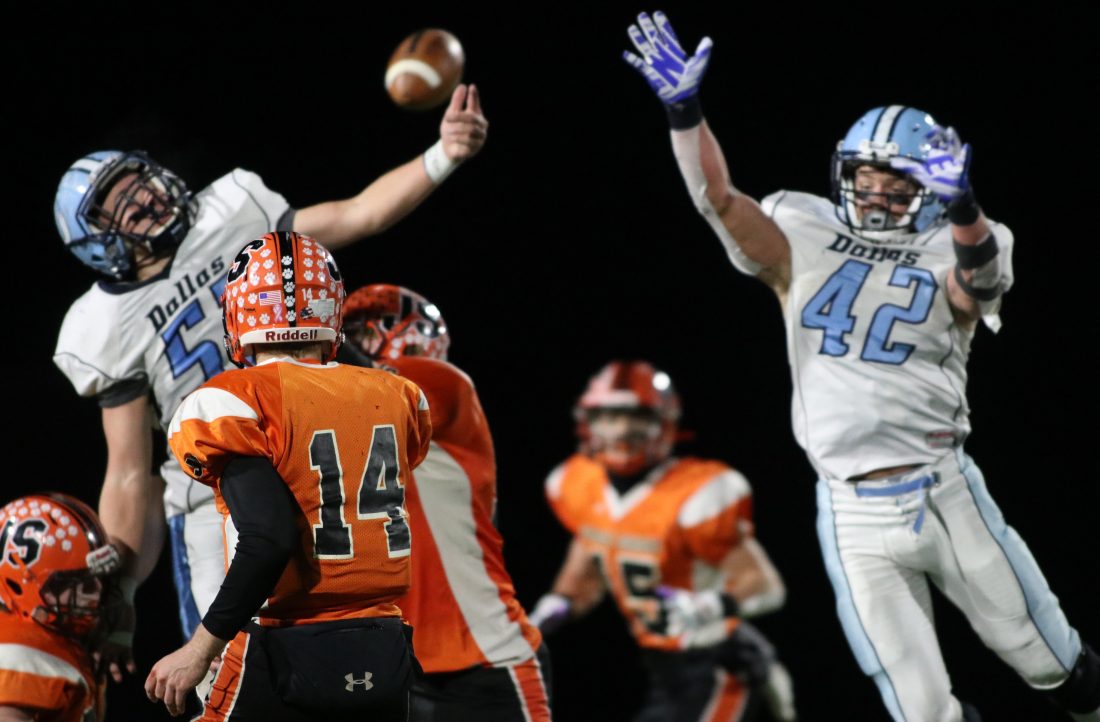 DAVE KENNEDY/Sun-Gazette Correspondent Jersey Shore’s Tanner Lorson has his pass tipped against Dallas at Danville on Friday in the PIAA Class AAAA semifinals in the first half.

DANVILLE — The road carried them from Penn State to West Virginia and to Kent State last summer.

All those trips led Jersey Shore to Danville and Friday night’s Class AAAA Eastern Region final. The long and winding road ended there, but in defeat Jersey Shore offered its many boisterous fans more highlights they can always fondly remember.

There was quarterback Tanner Lorson lighting up the night sky and dissecting one of the state’s best defenses. There was running back Josh Malicky running over defenders and producing extra yards. There were Stanton Westlin, Cayden Hess, Owen Anderson and Anthony Shaffer making highlight-reel catches and Dawson Sechrist delivering text-book tackles. Pick a Jersey Shore player that took the field last night and one saw him produce something good and something that symbolized everything this program has become.

There will be no state championship for Jersey Shore, but this team did not need another banner validating itself as a champion. The way these Bulldogs played all year already told the story.

Lenny Kelley ran for 296 yards and scored five touchdowns, Michael Starbuck threw three touchdown passes and Dallas scored 35 points in the middle quarters last night as it broke open a close game and defeated Jersey Shore, 56-28, in the state semifinals. Dallas (15-0) earned a spot in next Thursday’s state final against West champion Thomas Jefferson. Jersey Shore (11-4) closed out one of the best seasons in program history and became the area’s first state semifinalist since 2014.

And the ride which began last winter in the weight room and continued through multiple states last summer sure was an unforgettable one.

“It definitely was a year to remember. The group of seniors that we had and the brotherhood that we have, they made every single practice, every single game a blast,” senior wide receiver Stanton Westlin said after playing through a knee injury and catching eight passes for 91 yards. “It is one of the best things that’s happened in my life so. This was a great season and it’s been a great four years of my life.”

“I’m so proud of this team and of everyone that has been a part of it. I’m going to miss these seniors a lot. We set the bar high and we’re going to try and keep it going. That’s what we have to do,” three-way starter Owen Anderson said after catching six passes for 76 yards and shining on special teams. “It will hurt tonight, but we’ll be good. We’ll bounce back. This is the most fun I’ve ever had in any sport. I wouldn’t trade this for the world.”

The Jersey Shore community would not trade its team for the world either. Just like a week ago when the Bulldogs defeated Pottsville in triple overtime, Jersey Shore received a police escort back into town as jubilant fans provided one last ovation.

Those fans will understood that last night was not a case of Jersey Shore playing bad. The Bulldogs showed no fear and no surrender. They simply ran into a powerful team operating at peak capacity.

Still, Jersey Shore made this game an entertaining one, leading 7-0 in the first quarter and battling to a 14-14 tie after one. It even offered glimmers of hope that it could duplicate last week’s epic 21-point comeback against Pottsville when it scored early in the third quarter and cut a 21-point halftime deficit to 35-21.

But it was not to be. Dallas scored two straight third-quarter touchdowns and clinched the game on the fourth-quarter’s first play when Starbuck hit Bucknell-bound Dan Meuser for a 5-yard touchdown. Jersey Shore might have lost but it was not defeated as it put together one last scoring drive, Lorson barreling over two defenders and scoring on a 12-yard fourth-quarter run.

“We reminded the guys of all the highlights they accomplished. Yes, we wanted to go to the state championship and win the gold and we gave it our best shot. It didn’t work out and sometimes that happens in life, but we’re so proud of them accomplishing two straight PHAC championships, two straight district championships and getting to the Eastern final for the first time,” Jersey Shore coach Tom Gravish said. “It will be tough going home a little bit, but we’re going to continue to remind them what they accomplished, how much we appreciate them and that we love them all. Once a Bulldog, always a Bulldog and they’re Bulldogs for life.”

Lorson dazzled in his final scholastic game, completing 36 of 60 passes for 362 yards and two touchdowns against one of the state’s best defenses. He went over 3,500 yards this season and finished one of the best individual seasons in District 4 history with 57 total touchdowns as well as more than 1,100 rushing yards.

Shaffer caught 10 passes, Hess went over 100 yards for a second straight week and both Westlin and Anderson had big games, consistently breaking tackles and gaining yards after the catch.

That dynamic offense operating its no-huddle offense at Jesse Owens-type speed had Dallas on its heels at times. The Mountaineers fumbled on their first two plays and Jersey Shore pounced following the second turnover with Malicky scoring on a 10-yard touchdown and giving it a 7-0 lead. Dallas scored on its next two series, but a spectacular Hess 8-yard diving touchdown catch capped an 80-yard scoring drive as Jersey Shore tied it, 14-14.

Dallas’s offensive line set the tone in the second quarter and the Mountaineers kept Jersey Shore off-balance with good balance and three Kelley touchdown runs had it up 35-14 at the half. When the Bulldogs opened the third quarter with a 67-yard touchdown drive which Lorson completed with a 10-yard strike to Hess, Jersey Shore looked poised to make a second straight huge comeback.

“We didn’t quit. We stayed in and played hard till the end,” Anderson said. “We thought we could come back on them, but we just fell short.”

“They battled hard the whole time. Dallas just has some incredible players and made a few more plays than we did,” Gravish said. “But we’ve had so much fun all year and their approach to every practice and every game was amazing.”

Kelley scored on third-quarter runs of 19 and 78. During that time, the offense sputtered for the only time in the game with Dallas intercepting two passes and consistently pressuring Lorson. The Bulldogs were unable to keep up, but the defense still did deliver some impressive plays.

Linebacker Dawson Sechrist again showcased his all-state credentials, making 15 tackles, including four for loss. With Dallas leading 49-21 late in the third quarter, Ryan Kershner stopped Meuser for no gain and forced a punt. Dallas tried a fake to put the game away, but Sechrist made a fabulous open-field tackle and tripped up Kelley half a yard short of the first down.

Those are the kind of hustle plays Jersey Shore athletes made all season. More than the wins, it was that hustle and character that really defined this team. A program that opened the decade with two wins in three years is now one of the state’s best four teams.

The season is over but the journey continues. And maybe this memorable run was just a start.

“There’s tons of people coming back who can have big years. This is a new Jersey Shore program,” Westlin said. “We started a whole new program here. This is a real big milestone for Jersey Shore.”