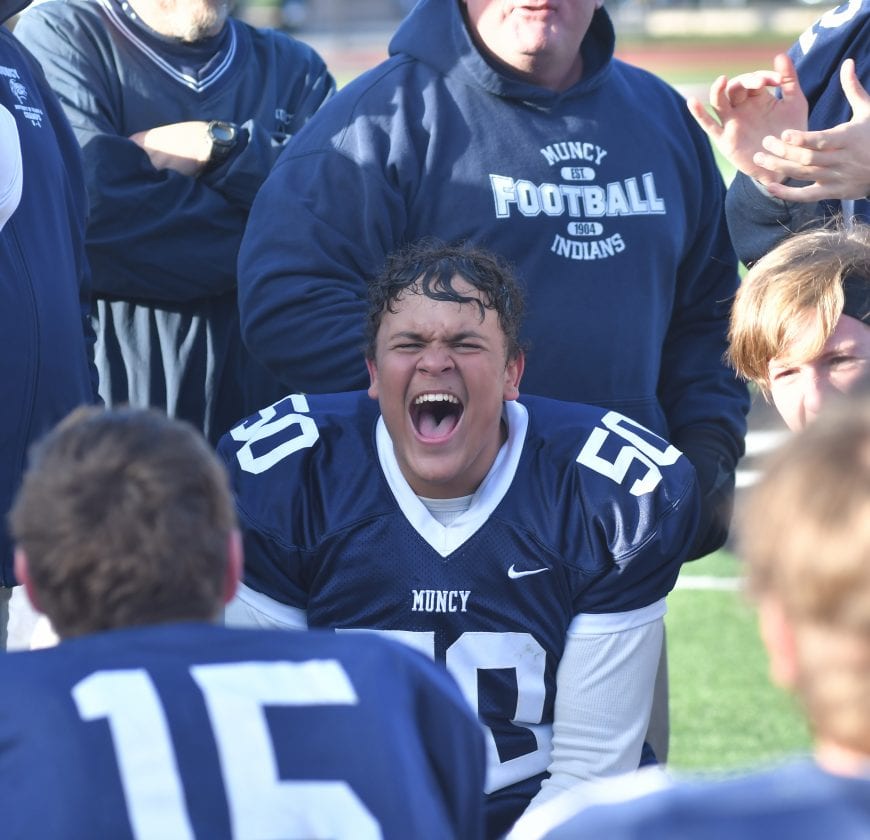 MARK NANCE/Sun-Gazette GARRETT CARR/Sun-Gazette Correspondent Muncy’s Xander Brown screams in excitement during a postgame huddle at Williamsport after the Indians defeated Millersburg, 49-0, Saturday in the first round of the PIAA Class A playoffs. It was the Indians first program state playoff win. Muncy advances to play Lackawanna Trail in the PIAA Class A quarterfinals next weekend at a time and place to be determined.

A week after repeating as District 4 Class A champions, Muncy dominated all facets at Millionaire Stadium, scoring on seven of nine possessions, bottling up a potent offense and blanking Millersburg, 49-0, while winning the program’s first state tournament game. The Indians (9-4) are state quarterfinal-bound and will play 2018 finalist Lackawanna Trail next weekend at a District 4 site.

But ask the players and there is one ingredient fueling a historic season that cannot be seen or measured. That X-factor has played a major role in a team that few thought would even go .500 becoming one of the greatest in school history.

“We all put the work in. It’s just all heart,” two-way lineman Mason Hillman said. “It’s really emotional and we’re all really happy about it. We’re all pumped up now and it’s on to Lackawanna Trail next week.”

“It’s awesome just to be the first team to ever win a state game. It means a lot,” Gush said after running for a career-high 204 yards and two touchdowns. “This team that everyone thought was going to be nothing because we’re so young has worked so hard all season and it’s showing now.”

After avenging regular-season losses in districts against Sayre and Canton on the road, Muncy showed no let up against Millersburg. Hillman and fellow linemen Dakota Haueisen, Isaac Harris, Cael Hembury and Gavin Hillman set a physical tone, opened holes that trucks could plow through and helped Muncy score touchdowns on its first four possessions. Muncy piled up 470 rushing yards, 30 first downs and averaged 7.5 yards per play.

The Indians not only controlled the line, but also the clock, using 11 and 10-play drives to take a 14-0 first-quarter lead. Muncy held the ball for 8 minutes, 29 seconds in the first quarter and maintained the formula in the second quarter when Gush and Christian Good scored 1-yard touchdowns that made it 28-0. Quarterback Branson Eyer brought the mercy rule into play midway through the third quarter, running for a 26-yard touchdown. Paul Pepper and Dillyn Sharr added fourth-quarter touchdowns and Muncy had ample time throughout those final 12 minutes to savor how far it has come and and the mark it has left on program history.

“It’s been a big buildup. I couldn’t ask for more. I love this team,” Hillman said. “It’s really great that we were able to make it this far and make history in my senior year. It feels great.”

“Everything has come together,” Gush said. “It’s awesome.”

So was Muncy’s defense.

Muncy’s offensive line created big holes and its defensive line closed them. Hillman had a sack and tackle for four-yard loss on consecutive first-quarter plays as Muncy started imposing its will against Millersburg. Hillman, Haueisen, Hembury and Xander Brown shined up front as Muncy stifled the run and the secondary blanketed receivers.

Millersburg produced just 67 yards on its first 37 plays before completing a 55-yard pass against Muncy’s backups on the game’s final play. It was a historic victory as complete as it was impressive with Isaac Boring going 7 for 7 on extra points and the punt and kick return teams smothering returners.

“In Single A football your starters on offense play on defense so that physical mentality is ingrained,” Tetreault said. “It doesn’t matter what side of the football they’re on or if it’s special teams. We want to be a hard-nosed, hard-hitting team and it was great to see all three phases do that today.”

TURBOTVILLE — Looking up to a 6-foot-6 Ethan Hartman and a 6-foot-5 Kade Anzulavich and trying to gain rebounds ...

LHU wins at home by 7 in women’s basketball

LOCK HAVEN — Coming off a big win on the road at Bloomsburg, the Lock Haven University women’s basketball team ...