Shearer’s numbers are down for the greater good for Montoursville 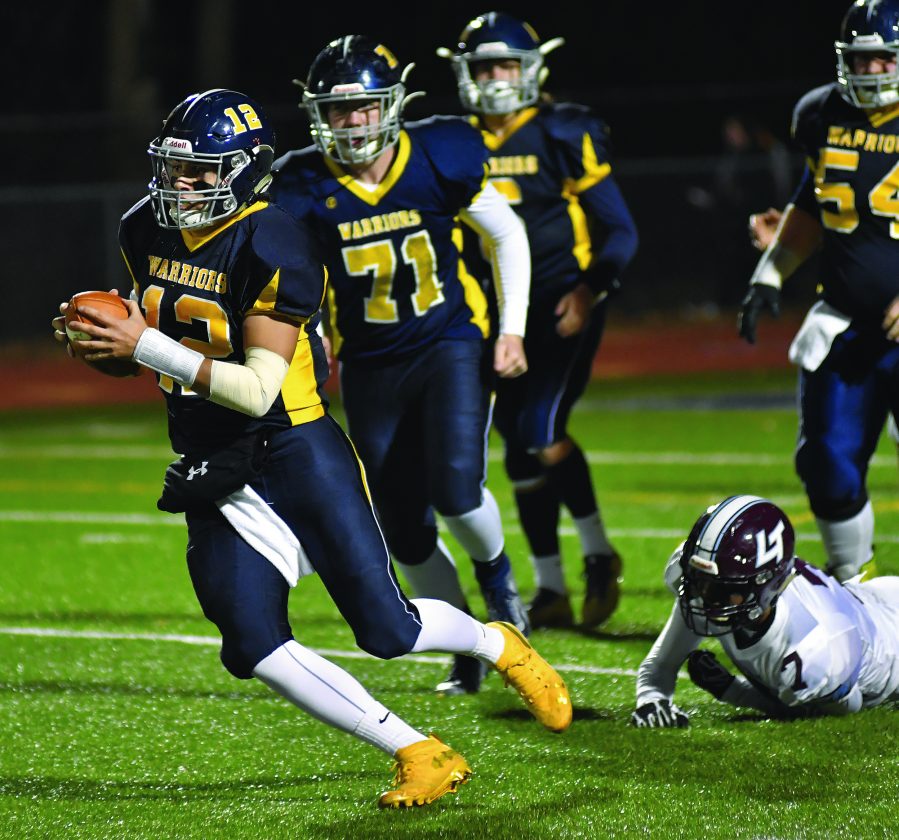 Look at J.C. Keefer’s playsheet and one might believe he or she is reading a foreign language. The ample football terminology the Montoursville coach utilizes likely would make Oakland Raiders coach Jon Gruden smile with approval.

As a young quarterback, though, digesting all those plays can be difficult. Hunter Shearer learned that as a sophomore two years ago. The first-time starter was surrounded by younger players and had to learn on the fly as that team, featuring only three returning starters, went 2-8. Shearer kept studying, kept working and kept improving. He became a 2,000-yard passer for a District 4 Class AAA champion last year.

Then last Friday, it felt like everything came together at the perfect moment.

Shearer played one of his finest scholastic games, completing 15 of 19 passes for 241 yards and four touchdowns as Montoursville defeated Loyalsock, 42-14, and repeated as district champion. The senior quarterback seemed in total command operating an offense that shredded one of the district’s premier defenses. The play calls might seem complicated, but Shearer sure is executing them well as Montoursville prepares to playing District 2 champion Wyoming Area in Friday’s state quarterfinals.

“I’m trying get a kid like Maddix Dalena in as a sophomore because when Hunter was a sophomore that spun his head,” Keefer said. “Now I get half of it out and he’s already running back out on the field because he knows what it is.”

Combine that understanding with a quality work ethic and talent and one has a quarterback who has helped Montoursville win 23 games the last two seasons. As crazy as it may sound, though, Shearer has flown under the radar throughout much of his senior season.

A year ago, Shearer threw for 2,241 yards and 30 touchdowns, tying Brycen Mussina’s record for single-season touchdowns. This year, Montoursville has featured a dazzling running game ignited by a bruising offensive line. The Warriors have run the ball more than a year ago and also have overwhelmed opponents much more than a year ago. The strong running and frequent blowouts which have essentially ended many games by halftime limited Shearer’s passing opportunities.

Not that he cared.

“He doesn’t have the numbers he had last year because we don’t care about numbers. There is one stat that matters and that’s the ‘W’ or the ‘L,'” Keefer said. “We have the same guys, we just established the run a little more this year. We thought our matchup (Friday) with their secondary was something we could take advantage of so that was something we attacked early. We’re going to take our best matchups and that’s what we’re going to try and exploit like any good coach would.”

That gave Shearer a shot at reminding the district how good he can be. He opened the game with a 21-yard pass to Jaxon Dalena, completed 8 of his first 10 passes, and finished the first half with 178 yards and four touchdowns to three receivers. He helped Montoursville inflict the mercy rule early in the fourth quarter, finding Dalena and Dillon Young for 52 yards on his final two throws.

“It was fun to open up the playbook a bit,” Shearer said. “We’ve been grinding all year and it’s been working so why not do that? But the first time we played we ran the ball really well against them and we knew they were probably going to key on that, so that really opened up the field for me to get the ball to my playmakers.”

It was not just Shearer completing the passes that stood out. It was more how he was doing so. Shearer was throwing dimes throughout the game, hitting nearly every receiver in stride. Often, Shearer put the football only in places his receivers could make plays, including on a 37-yard touchdown to Dalena and 14-yard dagger of a touchdown to Young right before halftime.

Going against a defense which had stymied six consecutive opponents, Shearer conducted his offense like a maestro. He also became just the second quarterback in program history to reach 50 career touchdown passes.

“I was throwing well in warmups,” Shearer said. “Once I started out hot right away I felt like it was going to be a good night.”

“Hunter Shearer threw some very good balls through some very tight windows,” Young said after catching eight passes for 106 yards and two touchdowns. “He put the ball where it needed to be. On my slants I don’t think it could have fit it through a tighter window. On the throws to Jaxon he just laid it right in his basket.”

Shearer played his final game at Memorial Stadium last Friday. And he might just have played his best one there, too.

Although Loyalsock was hoping Friday’s game went differently, it does not take away from what it accomplished this season. The Lancers (9-4) lost four Division I players from their 2018 team, featured several new starters on both sides of the ball and still reached a district final for the second time in three years. Loyalsock took a six-game winning streak into the district final and made huge strides on both sides of the ball while growing more mature along the way.

Senior Aiden Gair recovered a fumble for a touchdown and fellow senior Malaki Parlante made two tackles for loss. They were part of a senior class that did not win a game as eighth graders, but who leave a strong legacy behind. Freshman running back Davion Hill went over 1,000 yards against Montoursville and veteran leaders meshed well with promising newcomers all year.

“I am incredibly proud of the kids and coaches. I recognize the score wasn’t much better (Friday), but the composure as well as style of play was certainly night and day,” Loyalsock coach Justin Van Fleet said. “Only one team per level ever leaves the field happy. Time is always the enemy. I am hopeful that we will continue to develop and take the next step. These seniors and juniors scored one touchdown in their entire eighth grade year. It’s such strong development.”

Muncy coach Sean Tetreault kept seeing Elijah Weikle whenever he entered the school’s weight room. He also would see him playing basketball and understood how talented an athlete the incoming freshman was.

The more Tetreault watched, the more he envisioned Weikle becoming a weapon on the football field. He just had to convince him to give football another shot. Weikle had not played football the previous seasons, but Tetreault convinced him to give it another shot. Just one year into his varsity football career, Weikle already has made a big impact.

And last Saturday, Weikle played his best game yet.

Weikle ran for a career-high 156 yards and a touchdown as Muncy blanked Millersburg, 49-0, and won the program’s first-ever state tournament game. Weikle showed good vision, ran hard and was slippery, capping Muncy’s 90-yard opening drive with a 20-yard touchdown while averaging 6.8 yards per carry. Injuries forced Weikle into the starting lineup in Week 2 and he responded with an 80-yard performance in a 48-14 win. The player they call Mojo became a starter again when the postseason began and has produced 232 yards in three games, providing a little lightning to 1,200-yard rusher Ethan Gush’s thunder.

“He was one of those guys we saw and we knew we had to get on the team,” Tetreault said. “It was great to see him out here getting more comfortable on the field. At the beginning of the year he was getting reacclimated to seeing the holes and this time of year he is seeing the holes great and making some great plays for us.”

Now Jersey Shore (10-3) has achieved all three. Two weeks after clinching another HAC-I title and a week after winning a second straight District 4 Class AAAA crown, Jersey Shore made it 3 for 3 by defeating District 1 champion Bishop Shanahan, 33-14, in the state tournament’s opening round. Every week is providing the opportunity to do something this program never has before the next one comes Friday against District 11 champion Pottsville.

An opportunistic defense led by Dawson Sechrist (18 tackles) kept Shanahan from finishing drives and frustrated a team that had scored 91 points during two district playoff games. Dalton Dugan recovered a fumble at the Bulldog 2-yard line, and Brett Guthrie’s interception set up a game-clinching Tanner Lorson touchdown run. Jersey Shore has won six straight games and the starters have not allowed more than two touchdowns in a game during that time.

Shanahan was coming off a 35-0 district championship win, but the offensive line surged and Josh Malicky ran for a 62-yard touchdown less than a minute into the game. Malicky finished with 127 yards, Lorson scored three touchdowns and both went over 1,000 rushing yards this season. Lorson is the first player in District 4 history to go over 2,000 yards passing and 1,000 yards rushing in the same season and he is one of only three passers in District 4 history to reach 2,800 yards passing.

The Sun-Gazette sports staff will select its annual All-Star team and name its Player and Coach of the Year in the Christmas edition. Putting this team together could prove a monumental task for the voters because it has been quite a season for area football with three teams winning district championships and reaching the state quarterfinals. Five teams reached district finals, 12 reached the postseason and players who do not earn first team honors could earn all-state selections.

Players of the Week

Hillman was an overpowering presence on both Muncy lines against Millersburg, helping Muncy hold a 516-22 yardage advantage. He opened up some big holes along the offensive line as Muncy piled up 470 rushing yards and also registered a sack and tackle for four-yard loss on consecutive first-quarter plays, setting the tone for a stifling defense. Bennett missed the second half of his sophomore season, but has made a major impact for the area’s top-ranked defense this season and given that unit another weapon. Bennett made eight tackles, including one for loss, against Loyalsock. It was not just his ability to help stuff the run that stood out, but also Bennett’s ability to cover which played a significant role in Loyalsock producing just 146 yards and scoring one offensive touchdown.

Game of the Week

Obviously, all three games are outstanding ones this weekend but this Class AAA quarterfinal especially stands out because it has felt like these teams were on a collision course to play all season. Both are 12-1, both romped through their respective district fields and both blew out strong opponents in their finals. Wyoming Area and Montoursville are undefeated against team’s not named Southern Columbia and both have been ranked among the state’s top 10 all season. These teams have not played in a lot of close games this year, but expect that to change Saturday.