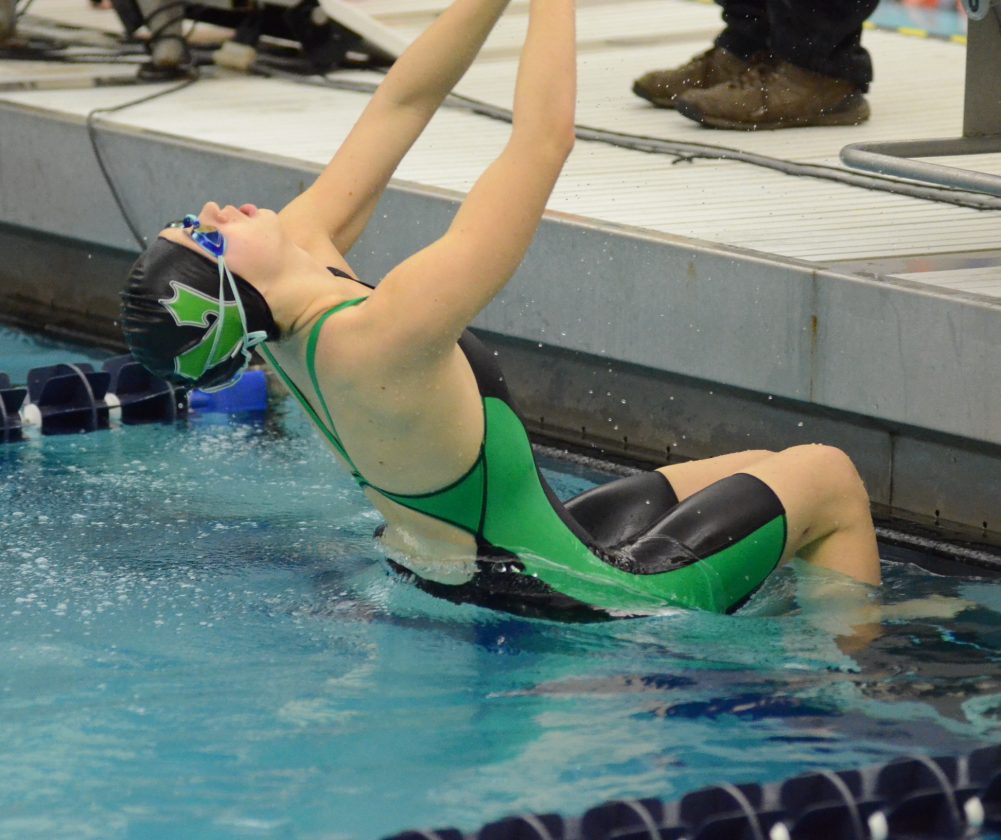 BRETT R. CROSSLEY/Sun-Gazette Correspondent Lewisburg’s Jewels Hepner competes during a meet last year. Hepner is one of the handful of Lewisburg state qualifiers returning to the pool this year. The Green Dragon boys and girls swimming teams are hoping to win district titles this season. The last time both teams won a District 4 team title came in 2016-17.

Lewisburg is coming off 8-2 seasons for both the boys and girls and bring back a plethora of qualifiers. Thirteen of Lewisburg’s swimmers are either district or state qualifiers, which will only help the Green Dragons this year.

Lewisburg coach Derek Updegraff hopes that both his teams can compete for not just a conference title, but a District 4 team title as well. The Green Dragons won both the boys and girls swimming district titles in the 2016-17 season.

“We have a good mix of returning veterans and newcomers to the team,” Updegraff said. “It will be an exciting season to find out how they mesh with one another and to see who will step up and make a contribution this season.”

On the girls side, Lewisburg brings back state qualifiers Anna Batkowski, Alexandra Decker, Jewels Hepner and Delaney Humphrey. Humphrey placed 18th in the IM and 14th in the 500 free last winter.

And that foursome is what Updegraff will rely on in the pool.

“I expect Delaney Humphrey, Jewels Hepner, Alex Decker and Anna Batkowski to contribute and make an impact. All four have experience at the state meet from last year,” Updegraff said. “All four, along with Lily McBride, Molly Gill and Hannah Castellan, can make an impact this year.”

“They both (Drouin and Haynos) have the experience that we will need to lead this team. Both had a good district meet last season,” Updegraff said. “Vaughn Holthus also had a breakthrough meet at districts last year, so we expect him to contribute a lot this season.

“The expectation is that we will work hard and focus on improving every day. If we can do that, we can be among the teams that challenge for the conference and district title.”

Jersey Shore brings back three returners from last year’s 200 free relay team that qualified for states in Meaghan Keegan, Veronica Sander and Jordan O’Connor. That trio brings plenty of experience and leadership to the Bulldogs this year as well.

“I am really hoping to end with a better record for both girls and boys teams, qualify more for districts, have a better finish at districts for both teams and return to states,” Jersey Shore coach Jenna Brooks said.

Brooks also is expecting a few new swimmers to help make an impact with the Bulldogs this season.

“We are still trying to see what they are all about and what they can provide to the team,” Brooks said. “So far there is a lot of great work ethic being put in the water in the short amount of time that we’ve had.”

The Bulldogs pool was under maintenance to begin the winter practices, so Jersey Shore had to practice at Williamsport’s pool. And while that is a bit of an inconvenience, Brooks views it as a good for the team sticking together.

“We have been having to go to Williamsport High School late every night for practice and the team has stuck together to make the best out of the situation at hand,” Brooks said. “This is a great group of kids that I have this year and I am looking forward to a great season.”

Williamsport had a remarkable season last year in both boys and girls under coach Nate Witmer. The boys team finished the year 9-5 and the girls cruised through the league to win the conference title with a 9-0 record and finished 13-1 overall.

“Swimming is both an individual and team sport. Our team’s success last year was built on a lot of individual efforts and successes that united to achieve our team goals. The equation for success this year has two parts: one is what we can do on our end and the other is what our competition is bringing to the pool,” Witmer said. “… We took a hit in the leadership and experience category with last year’s graduating class, but I am confident the leaders of this year’s team will be able to fill the shoes of those who graduated.

“Part of the excitement of coaching is seeing the kids developing as athletes, but also as young leaders. The character development is a large part of our program’s goal.”

The Millionaires brought home a lot of gold last season at the district meet. On the girls side, Lydia Smith and Mallory Pardoe won gold in the 50 free and 100 fly, respectively. Pardoe also broke the Williamsport record by nearly 2.5 seconds and set a new District 2-4 record in the process.

While Williamsport didn’t medal at the state meet, its swimmers gained plenty of experience by qualifying which will only help pay dividends in the pool this year for districts and states.

Pardoe was a freshman last year and will only improve as a sophomore. After states, Pardoe noted how she was going to train during the summer to prepare for her sophomore campaign.

As for what Witmer’s expecting this year?

“I’m not really sure what to expect quite yet as we have a lot of new faces – some of which are progressing rapidly — but we know where our goals are set,” Witmer said. “One of our big focuses — beyond winning of course — is developing character and the best leaders that we can. We believe that if we can get the upperclassmen and more experienced athletes to lead by setting examples of self-discipline, integrity and grit that the team cohesion and team success will follow.”

Williamsport has plenty returning as well on the boys side. Jack Beattie and Matthew Beard return, two members of the Millionaires’ 400 free relay team which won at districts. Beard won gold in the 50 free and placed third in the 100 free.

Like Pardoe and others on Williamsport’s swim team, Beard wanted to train throughout the offseason to prepare for this year.

Devon Shank also returns, a senior this year who placed fifth in the backstroke at districts. Ross Flerlage and Riley Hockman competed well in districts and return this year as a sophomore and junior, respectively.

Witmer also thinks that Jack Beattie — who placed second at districts in diving, broke a team record and competed at staets — is in good position this year to break both of the school’s team diving records.

“We feel we have three girls who could all qualify for districts this year. All three swimmers started in the program as freshmen with Maddi and Brilee entering their third year,” Warrior Run coach Jeremy Felix said.

The three have been swimming members in the summer at Milton and Felix and Slodysko swam for the East Lycoming Eels.

Montoursville graduated state qualifier Sam Jordan, who placed fourth in the 100 back. He also finished 18th in the 200 free, missing out on qualifying for the finals.

In District 6, Central Mountain returns three of its 200 free relay foursome in Parker Orndorf, Leisher Gugino and Derek Hughes. Last year, the relay team placed second in the District 6 Class AAA race with a time of 1:36.01. That trio also finished third in the 400 free relay with a time of 3:30.73.

As a team, Central Mountain was third in the district standings, behind just State College (district champs) and Hollidaysburg.

On the girls side, the Wildcats return all four members of its fifth-place 400 free relay team of Mikayla Rich, Madison Bair, Evie Rembold and Hannah Brian, which finished in 3:54.95 last year. McKenna Fox and Bair also were on last year’s third-place 200 medley relay team.

In total, of Central Mountain’s 16 swimmers on its roster, 10 have experience districts.

Police across US speak out against Minneapolis custody death