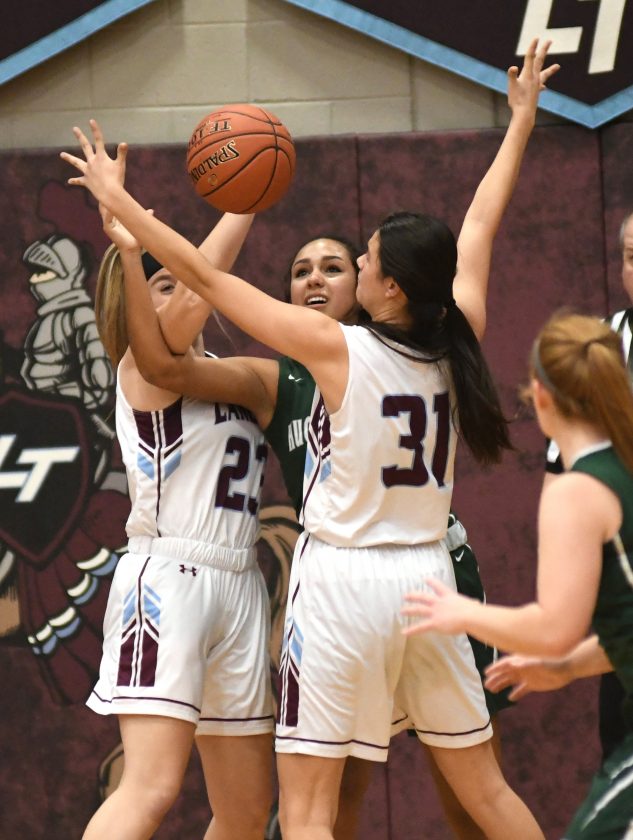 Allyia Kennedy assisted Cassie Gee as Loyalsock stopped a Hughesville run. Then she set up Summer McNulty for two free throws. Then she scored inside. Then she blocked a shot and made a steal.

All that occurred during a three-minute third quarter stretch Saturday at Loyalsock. And those three minutes offered a glimpse into just how dangerous this Lancer sophomore can be as she gains more experience. She certainly made a big difference against rival Hughesville.

“I remember the first game against Mifflinburg (last Monday). It was nerves throughout my body and now it’s like, ‘I’ve got it,'” Kennedy said. “We’re all a team and it’s good because everybody picks each other up on this team.”

Kennedy is becoming a big part of that team and her emergence is key for a team which lost four starters from last year’s District 4 Class AAA champion. She can be a difference-maker and showed it against Hughesville (2-0, 1-1), setting an early tone with seven first-half points, scoring in the post, hitting a 3-pointer and playing fantastic defense. More impressive than the stats was when Kennedy produced them. Seemingly every time Hughesville rallied, Kennedy made a play that swung the momentum Loyalsock’s way.

Gee hit three first-quarter 3-pointers and Loyalsock led by eight after one, but Hughesville pulled within 17-16 midway through the second. Kennedy then sank a 3-pointer in the corner, started crashing the boards and did a nice job altering shots in the paint as Loyalsock closed the half on a 6-0 run. After Hughesville made it a five-point game in the third, Kennedy produced her previously mentioned spurt, igniting a game-breaking 12-0 run that had the Lancers up, 37-20 entering the fourth quarter.

Kennedy has the physical tools, standing 5-foot-11 and running like a gazelle. She has a nice shooting touch, too. But what really has Kennedy coming on strong can be attributed to old-fashioned hard work, the kind she witnessed former Loyalsock forward/center Sarah Van Fleet deliver every day.

“I put in more time than I ever did in the offseason and I can see that really helping me throughout this year,” Kennedy said. “There are a lot of big spots that were lost last year and there was a realization that people are looking to take over Sarah’s spot and I’m happy to show that I can be like her because she was a really good player.”

“Allyia is a workhorse. We put a lot on her plate and she clearly has a different role than last year with us throwing her into the fire. She’s tall, but she’s also so long and she’s a catalyst for our defense,” Loyalsock coach Curtis Jacboson said. “She really has tremendous moves, she has really developed her game and she is extremely coachable. She wants to get better every single day. She has a purpose every time she’s in the gym. The sky is the limit for her. She worked and worked and worked and is going to see more and more success as the year goes on.”

Kennedy gives opponents another player with whom to be concerned. McNulty is a two-time first team HAC-III all-star and Gee shined off the bench a year ago. Both are off to strong starts this season and Kennedy provides an inside threat to open up the court more. That played a role in McNulty (4 rebounds, 2 steals) scoring 11 second-half points. McNulty scored four straight points after Hughesville pulled within 14 early in the fourth quarter before Kennedy scored off a putback and found McNulty on a backdoor cut as Loyalsock clinched an impressive win against a good team.

This was another step forward in the process for a young, but hungry team. The Lancers have new players this season, although their look remains the same. They still compete hard, are well-rounded and play tough defense. Loyalsock never let Hughesville find its rhythm, holding it to 10 or fewer points in all four quarters. The Lancers also forced 18 turnovers and outscored Hughesville, 14-4 in the third quarter.

“It’s the first time all year that we had a game plan that we executed defensively,” Jacobson said. “We know if you let their shooters shoot that they can make them consistently. We’re not the biggest team down low, but we’re going to battle like we have in years past. Those girls have learned form the Van Fleet’s and the people that were never tall but always battled and gave it their best shot.”

Hughesville gave its best shot as well, but as frustrating as Loyalsock’s defense were missed opportunities. The Spartans had several chances throughout the first three quarters at changing the game’s complexion, but missed 13 shots from close range. Some of that was defense impacting the shots, some of it was just having an off day.

All those players started or received significant varsity minutes last year. That is why Loyalsock winning yesterday is another important step forward along its journey. The Lancers are growing each game and received a lift from players like Anna Burdett (5 rebounds) and Sophia Gardner (3 steals) yesterday. Madison Jean, Mia Patterson, Karyn Saar and Jocelyn Cruz provided quality minutes off the bench and that depth played a role in slowing Hughesville down, especially in the second half.

“It really helps us with our collaboration,” Kennedy said. “The girls last year played together for a really long time and now that we’re playing together and winning games it’s pushing ourselves and giving us a good boost.”