Crawley has match-winning fall at 120 for Indians 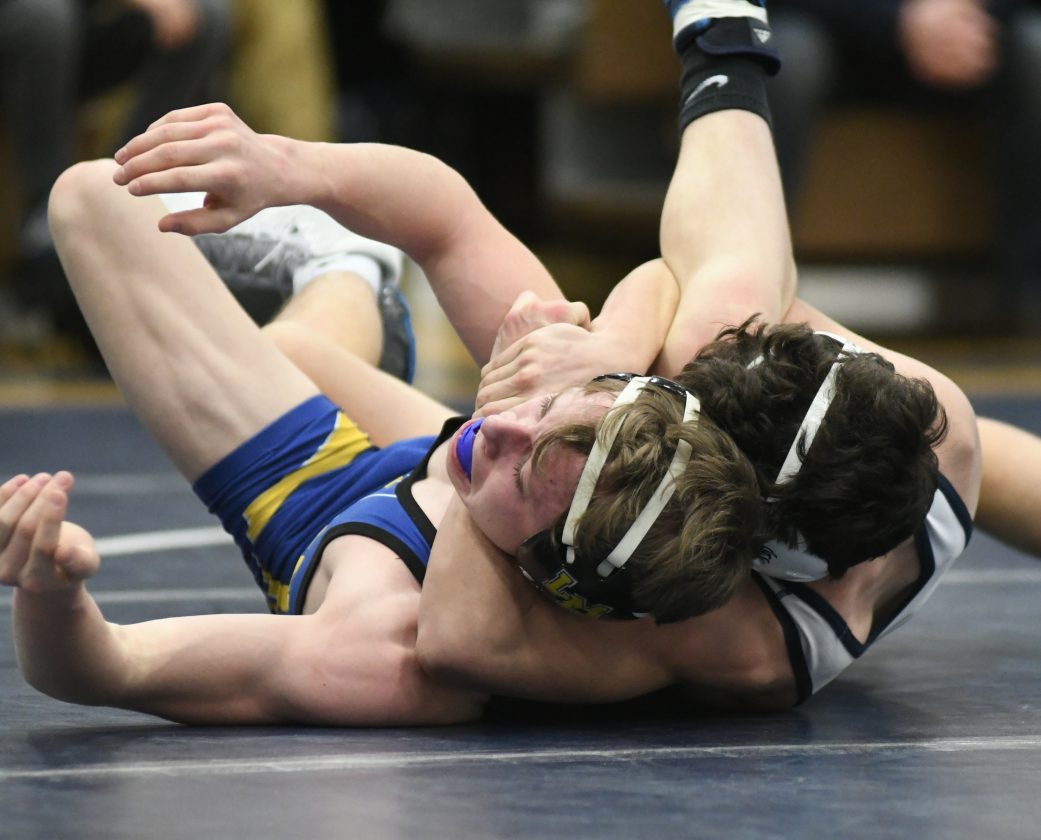 MUNCY — Jacob Blair jumped out of his seat on the bench and began clapping. As the Muncy senior took a few steps onto the mat, he pointed at sophomore teammate Chase Crawley who just picked up the match-winning fall in approval.

Blair got Muncy’s run to knock off undefeated Line Mountain started Tuesday night when he picked up a technical fall in a matchup of state-ranked wrestlers. Crawley finished it off with a fall in the final bout to give the 10th-ranked Indians a 43-36 win over previously unbeaten and No. 19 Line Mountain.

The loss for Line Mountain (13-1) knocked it out of the No. 1 seed for the District 4 Duals for the time being. The Eagles were one of just three Class AA teams in District 4 still undefeated heading into last night’s matches. Montoursville emerged as the last remaining unbeaten team after it beat Midd-West and Benton lost to Southern Columbia.

Both Muncy and Line Mountain got exactly what they needed out of last night’s match. The Indians got the bounce-back win they needed after being dominated by Southern Columbia on Saturday night. Line Mountain got the strong test it needed to test its wrestlers before the postseason rolls around in two weeks.

“Winning always brings your confidence up,” Muncy coach Royce Eyer said. “All the way through district duals it’s going to be tight for us with our lineup. So someone is always going to be in a pressure situation and they have to figure out how to win.” 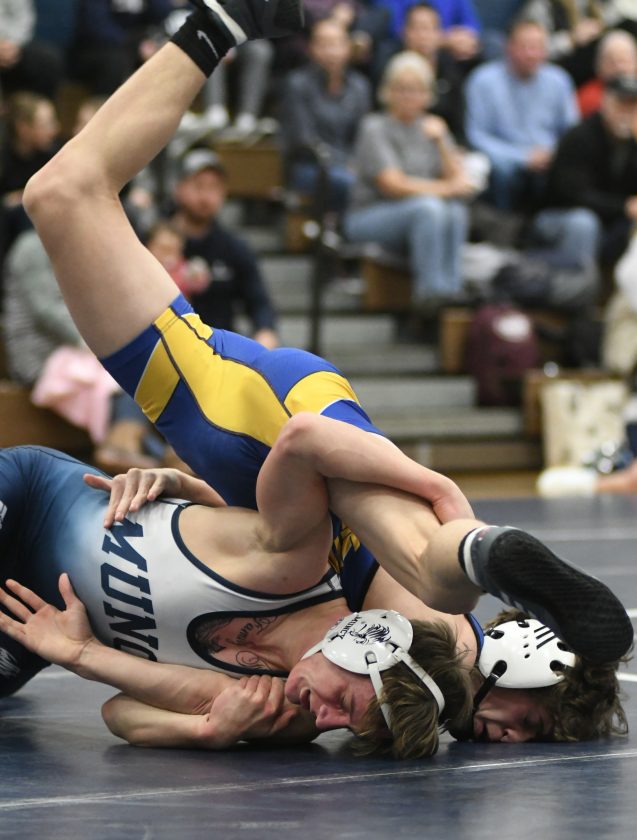 That pressure situation was put squarely on Crawley’s shoulders last night, not that her particularly minded. The way the dual unfolded, it was clear the dual was going to be tight to the end, especially when Line Mountain’s Jacob Feese earned a fall at 182 pounds to cut Line Mountain’s deficit to 25-18 with six bouts to go. Five consecutive forfeits — three for Line Mountain, two for Muncy — gave the Indians a 37-36 lead heading into the final bout.

Crawley admitted he felt the nerves at first, but when he scored the opening takedown against Lane Schadel, everything seemed to calm down. He locked up a cradle for three near-fall points in the first period. He got another one in the second period and referee Tom Gibble slapped the mat 3 minutes, 10 seconds into the bout securing Muncy’s win, and giving Blair reason to jump out of his seat along with assistant coach Ron Hembury, to congratulate Crawley.

“I try not to think about what’s on the line,” Crawley said. “I just try to go out and get the win and get the win for the team. We had a great team effort all around. After Southern, we needed something to bring us back up again.”

That great team effort included Blair and Bryce Vollman getting critical bonus points in the night’s first two bouts. Blair, ranked eighth at 126 pounds, was electric in an 18-3 technical fall against 12th-ranked Blake Wirt. He twice used feet-to-back moves, one on a sweet fireman’s carry, for five-point moves against the former state qualifier.

Vollman followed suit, controlling his matchup at 132 with state qualifier Mason Leshock from the start and building a 6-1 lead after two periods. But with only a minute left in the bout and with Eyer needing at least one bonus point, Vollman went into overdrive. He picked up three separate takedowns in the final minute and added a late cradle to seal the 15-4 major decision. 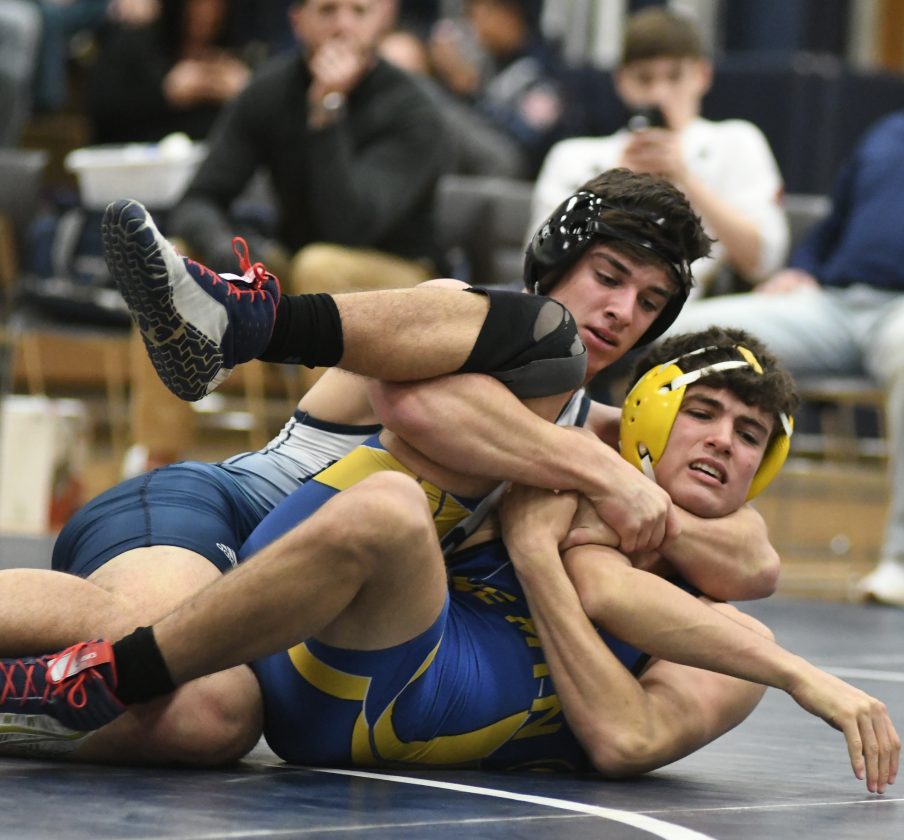 Eyer not only wanted bonus points from those two matches, but he was counting on them from two of his best wrestlers.

“We know how good our guys can be when they wrestle, and they came out and wrestled,” Eyer said. “Those are the kinds of matches they have to wrestle. Bryce is as good as anybody in the state when he opens up. I see that every day in the practice room.”

After those two matches, the dual pretty much played out as it did on paper beforehand. State-ranked Mario Barberio (145 pounds), Christian Good (152) and Ethan Gush (170) added bonus-point wins to give Muncy a 25-12 lead halfway through the dual. State-ranked Ian Coller and Feese added falls for Line Mountain, as did former state qualifier Matty Coller.

Then both coaches chose to leave their wrestlers at their respective weights and trade five consecutive forfeits from 195 to 113 pounds, leaving Crawley and Schadel to decide the winner in the final bout. Crawley has been a key part to a Muncy team whose top-tier talent is as good as anybody’s in the district. But having lost state qualifier Ty Nixon for the year to a torn ACL, the Indians needed contributions from other places in the lineup besides its top talent.

Crawley has helped provide that. He moved to 12-6 with last night’s win and is going to be a key component in the lineup if the Indians want to make their third consecutive trip to the PIAA Team Wrestling Championships in February.

“Ty was a big part of our team, so everyone needed to step up,” Crawley said. “I feel like I’ve wrestled OK, but I still think I can wrestle better.”

“He just has to learn to control his emotion a little bit because he went out there a little too hyped up,” Eyer said. “But now that he’s at the weight he should have been at the beginning of the year, he’s doing what we need him to do. He’s still making adjustments, but we’ll see how far he can take it in the postseason.”