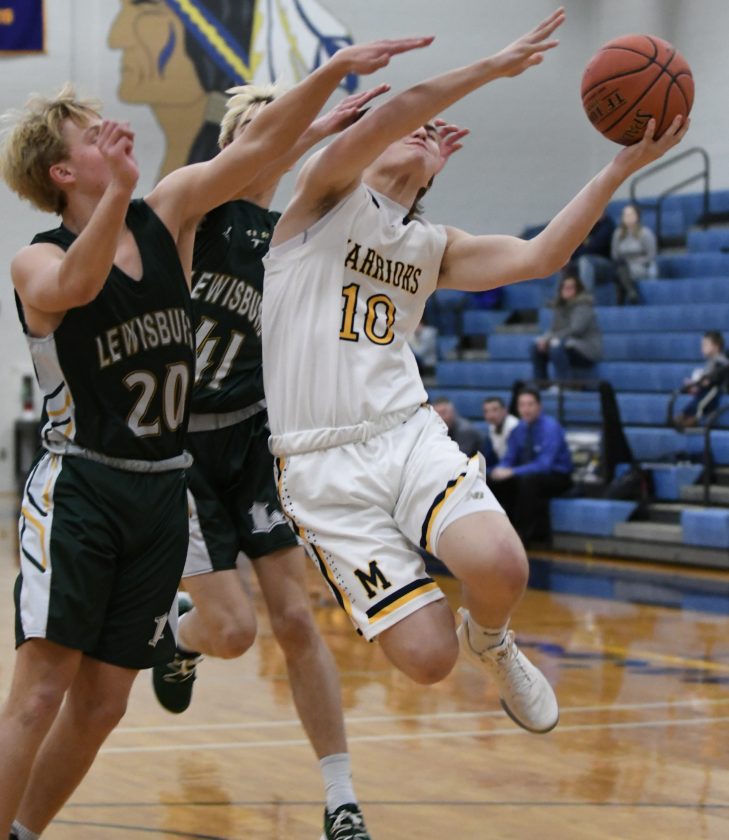 Dante Sims never doubted himself. The Lewisburg senior guard wanted the ball and he welcomed the pressure.

Sims has not been the most consistent foul shooter this season, but maybe the stakes were just not high enough before because when everything was riding on his shooting, Sims delivered. Sims drained two late game-tying free throws that forced overtime Wednesday at Montoursville. Cam Michaels then fed Ben Liscum for the go-ahead layup with 35 seconds remaining as Lewisburg won a thrilling, back-and-forth HAC-II contest, 52-51.

Nick Shedleski scored a game-high 21 points as Lewisburg (11-5, 4-3) built a 16-point second-quarter lead before Montoursville stormed back and took a five-point lead with 47 seconds left in regulation. Sims forced a critical late turnover and Lewisburg did just enough to snap a three-game losing streak against the Warriors (9-3, 4-3) as well as clinch a District 4 Class AAAA playoff berth.

Sims did more than that. He also played outstanding defense late after it appeared Hunter Shearer’s baseball pass assist to Jake Simms might seal the game, putting Montoursville up 49-44 at the 47-second mark. Michaels, however, countered with two foul shots four seconds later and Sims made a steal near midcourt which led to Liscum hitting another that made it 49-47.

Shedleski kept the defensive pressure up and made a steal at the Montoursville foul line on the ensuing possession. Sims attacked the basket, was fouled and calmly swished both foul shots. Montoursville’s last-second shot at a game-winner was just off the mark and Sims continued making key plays in overtime. He grabbed two offensive rebounds and kept the defensive pressure up as Lewisburg surrendered just one field goal.

“He would probably be the first to tell you he doesn’t necessarily shoot the ball well from the foul line, but he stepped up there with confidence and knocked them down,” Lewisburg coach Matt Salsman said. “That should be great for him going forward.”

Lewisburg looked great early, connecting on 8 of its first 11 shots and going up 23-7 two minutes into the second quarter. The Dragons executed well on both ends during that time, efficiently moved the ball and had good balance. Everything soon started changing, though, and Montoursville pulled within four by halftime before using a 12-2 run to go up five with two minutes left.

Instead of buckling and wondering what could have been, Lewisburg kept thinking about what could be and thundered back during the final 47 seconds. Peter Lantz (14 points, 3 steals) hit a foul shot to open overtime before Josh Burger’s impressive up and under drive gave Montoursville a 51-50 lead. Shedleski rebounded an inopportune Montoursville shot in the final minute before dishing to Michaels. The freshman then spotted Liscum streaking in from the left wing, hitting him in stride for the game-winning layup.

Montoursville had two shots at winning over a final chaotic 15 seconds. Shearer’s baseline drive bounced off the rim and Sims rebounded it, but Montoursville forced a turnover. Burger put up a shot in the paint that bounced slowly on the rim before going in and out. The last five seconds were a scrum with both teams fighting for a loose ball and time expiring before anyone could secure it.

“This team has been fighting all year so I knew we could do it. That’s the tradition we’ve built at Lewisburg,” Sims said. “We’re going to fight on when we’re down so we just had to keep battling.”

“This should only help us,” Salsman said. “We’re playing a lot of close games and we’re starting to win the tight games and that’s what might be allowing us to win a lot of these games, but there’s a lot we have to get better at.”

Montoursville was left wondering what if after making an impressive comeback only to watch it slip away in the final 47 seconds of regulation. The Warriors are playing without HAC-II all-stars Austin Loe and Dillon Young, but had the game exactly where they wanted it in the final minute. As exciting as the win was for Lewisburg, the loss was equally painful for Montoursville which lost its grip on the district’s top Class AAAA seed.

The Warriors turned the ball over five times in the fourth quarter. They made 7 of 9 shots during that time, but the turnovers loomed large and negated the comeback that had been made.

“We found a way to claw back a little bit at a time, but you have to make good decisions and we made some poor ones and we turned the ball over too much and it cost us the game,” Montoursville coach Mike Mussina said. “It’s basketball, it’s sports. Stuff happens that way, but it’s frustrating because you work that hard and do climb out of a big, nasty hole and get the lead and just kind of give it back to them.”

At different times the HAC-II rivals mirrored each other. Both teams utilized excellent movement during their good stretches and combined for 30 assists on 38 field goals. Liscum had a team-high five assists as well as seven rebounds and Michaels forced four Montoursville turnovers in the third-quarter’s first three minutes, helping Lewisburg go up nine.

“We came out really flat. We played no defense and they made every shot they took for most of the first quarter,” Mussina said. “It was just a tough game for us on both ends of the floor. We’re playing without two all-conference players, but we still have to go out and play the basketball game with the players we have.”

Jacob Blair stepped off the awards podium inside Williamsport High School’s Magic Dome on Saturday with his hand ...