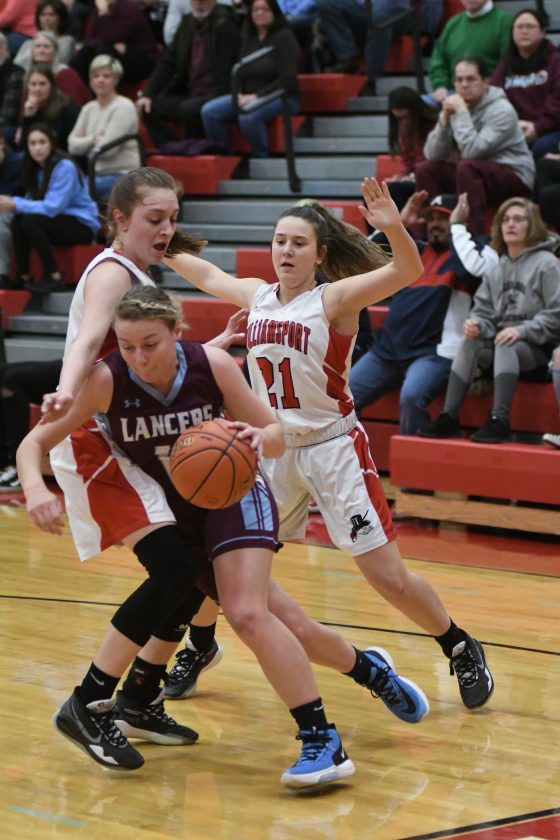 Chanting overrated was not a good idea.

Williamsport students chanted that word at Loyalsock captain Summer McNulty early Thursday at the Magic Dome. McNulty spent the final three quarters proving how wrong they were and after the second quarter they never chanted that word again. The annual Loyalsock-Williamsport game was a great one, going back and forth in front of a large and boisterous crowd.

But McNulty would not let Loyalsock lose.

McNulty scored a career-high 29 points, made six steals and scored four crucial points in the final minute as Loyalsock scored the last six points and edged Williamsport, 57-50. The chants were loudest throughout the first quarter, but over the final three, McNulty scored 26 points, went 11 for 14 at the line, silenced the critics and helped Loyalsock (13-0) remain undefeated.

“It actually gets me going because it lifts me. It motivates me to prove it wrong,” McNulty said. “You have to block out the crowd and most of the time I’m not paying attention because you don’t want to try and not do too much.”

“It’s all fun and games and when we understand that, but there’s nothing about her that is overrated. She plays her tail off. She takes a beating and she went on the floor a lot and played a lot of minutes,” Loyalsock coach Curtis Jacobson said. “In a game like this, she’s very valuable to us.”

Loyalsock needed McNulty at her best and the three-year starter delivered time after time against a determined Williamsport (4-7) team which led by six early, trailed by 10 in the third and pulled within one three times in the fourth quarter. McNulty often answered when Williamsport threatened to take the game over and shined especially bright in that last minute.

After Samiyah Little scored inside and made it, 51-50, Loyalsock methodically moved the ball around and set up McNulty inside. Sophia Gardner threw a good entry pass and McNulty used a strong post move, making it a three-point game. Allyia Kennedy grabbed a rebound on Williamsport’s ensuing possession and fed Gardner for a layup before McNulty clinched the win with two free throws.

McNulty was 8 for 13 from the field those last three quarters. She has become a matchup nightmare, running the offense at times and posting up at others. McNulty scored off the dribble, down low and in transition, showing no fear on constant forays inside.

“No matter how much we tried to step it up Williamsport doubled right back up with us and played with us again,” McNulty said. “(Boys assistant) Coach Jeff Everett was working with us for a little and said if they go on a run you just have to keep your composure. You have to play your game and run your stuff and we took that to heart.”

That was important against the Millionaires who seemed intent on coming all the way back in that fourth quarter. Jessica Robinson made it 43-42 with a free throw, Katelyn Wilson made a steal and fed Kailee Helmrich to make it 49-48 and Little’s final basket made it a one-point game one last time. The Millionaires did not get over the hump, but taking the undefeated defending District 4 Class AAA champions could provide a springboard moving forward.

“This is what we have to do every night. It has to be the same intensity every game,” Williamsport coach Terrill Seward-Buxton said. “The only thing you can control is your effort and tonight they laid it out there.”

The Lancers did not deliver their prettiest performance and Jacobson knows his team must play better if it hopes to repeat as district champions. But they again found a way to win a close game against a quality opponent two nights after rallying in the fourth quarter on the road and defeating Central Columbia. Different players came through at crucial times and Mia Patterson delivered a key four-point flurry that put Loyalsock up 47-42 with five minutes remaining.

Gardner was a tone setter on both ends, finishing with 11 points and making two steals. Cassie Gee was perfect on six free throw attempts and made six steals while Kennedy added six rebounds, three assists and two steals. Loyalsock never trailed after going on an 11-2 second-quarter run and building a 30-22 halftime lead.

“In spurts it’s there and there are huge pieces in spurts for us, but it’s not there in the consistent nature that we need right now. We need to get better because I know we’re not where we could be right now on both ends,” Jacobson said. “I can’t fault them for how hard they play. We had to pull people off the floor just because so they were so tired. That’ s blessing that I don’t have to force them to play hard but we have to play smarter.”

Williamsport started strong and led 9-3 a little more than two minutes into the game. The Millionaires had chances at building a bigger lead, but missed several quality looks inside. Still, the Millionaires shook off some of the shooting struggles and fought back every time Loyalsock looked like it might break things open. The Millionaires ran their offense well and had a lot of success inside with Little (12 points, 10 rebounds, 3 assists), Sophia Erb (10 points and Robinson (7 points) doing damage at different times.

Helmrich continues to emerge as a dangerous point guard and the sophomore dealt eight assists while scoring eight points. Emily Pardee made some big hustle plays and Wilson, Enya Green-Pratt, Atiya Jones and Sarina Beiter all had two steals.

“I tell our girls you have to compete every play and we did for the most part,” Seward-Buxton said. “I told them to keep your heads up because you competed. Sometimes you can give maximum effort and not win the game because the other team was better that night, but I could not be prouder of the way they played and competed.”