MARK NANCE/Sun-Gazette Montoursville’s Branden Wentzel, ranked fourth in the state, wrestles against No. 16 Isaac Landis during their bout at 106 pounds at Montoursville on Saturday. Wentzel won by technical fall, 21-4, 5:36. 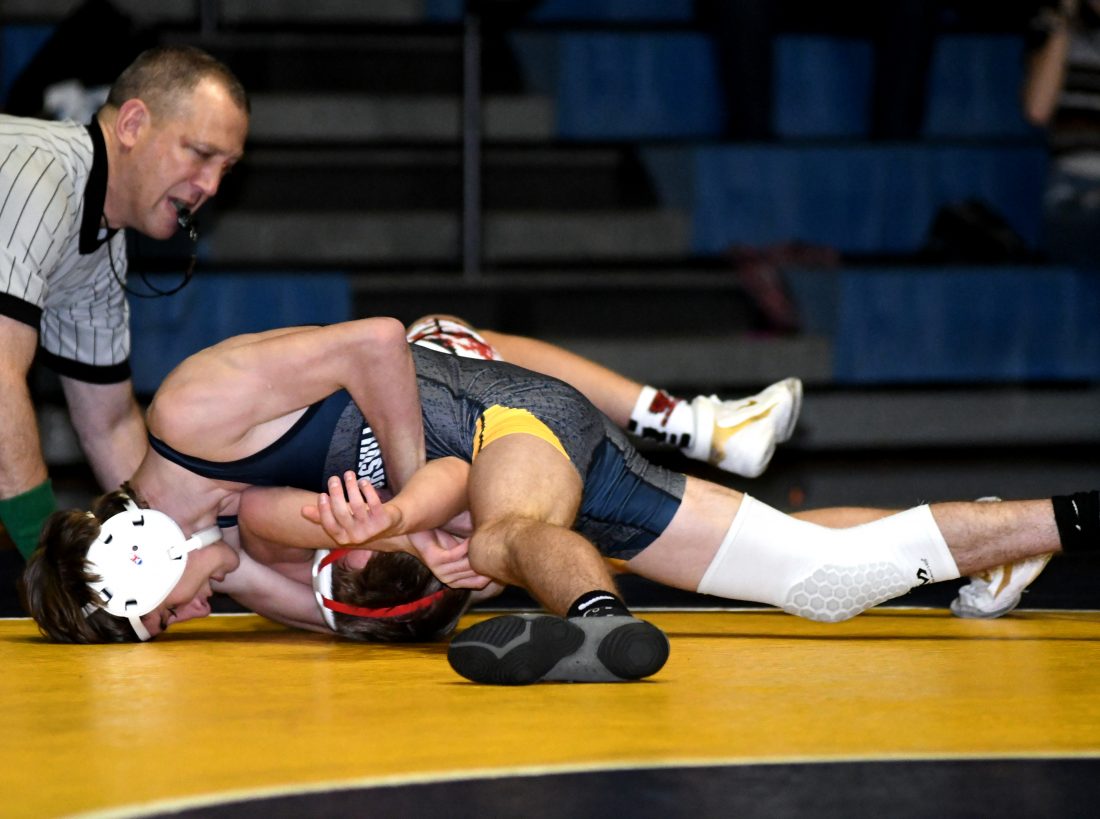 MARK NANCE/Sun-Gazette Montoursville’s Branden Wentzel, ranked fourth in the state, wrestles against No. 16 Isaac Landis during their bout at 106 pounds at Montoursville on Saturday. Wentzel won by technical fall, 21-4, 5:36.

Montoursville had sexier wins than Jake Dinges’ decision win at 152 pounds Saturday night against Canton. It won three matchups featuring state-ranked wrestlers on both sides of the line, with two of them earning bonus points.

Dinges isn’t ranked. Neither is Canton 152-pounder Brenan Taylor. But the senior’s four-point win last night was easily the most important for Montoursville. He pushed the team’s lead to five points before his teammates ripped off five consecutive wins to close the dual in a 48-21 win over Canton in a matchup of unbeaten teams.

Montoursville improved to 8-0 with the win, the second-best record in District 4 just two weeks before the district duals cutoff date. Only Line Mountain’s 13-0 record is better. Canton fell to 6-1.

“Those are the kind of wins I was hoping to see from Dinges,” Montoursville coach Matt Yonkin said. “He worked really hard in the summer and spent a lot of time in the weight room, and a lot of time rolling around with (Isaac) Cory, (Cael) Crebs and (Dylan) Bennett. Being a senior, these are the kinds of wins we need from him and I’m very proud of him.”

Dinges’ win pushed Montoursville’s lead to 26-21 with five bouts to go. He then put that lead safely in the hands of the Warriors’ dangerous upperweights, and they responded as fifth-ranked Crebs dominated in an 8-0 major decision over eighth-ranked Timmy Ward. No. 7 Bennett held on late for a 4-3 lead over No. 11 Garrett Storch, and No. 4 Cameron Wood put an exclamation point on the win with a 40-second fall at 220 pounds. Add in Gavin Livermore’s upset of No. 19 Derek Atherton-Ely, and Montoursville had about as perfect a close to the dual as it could have asked for. 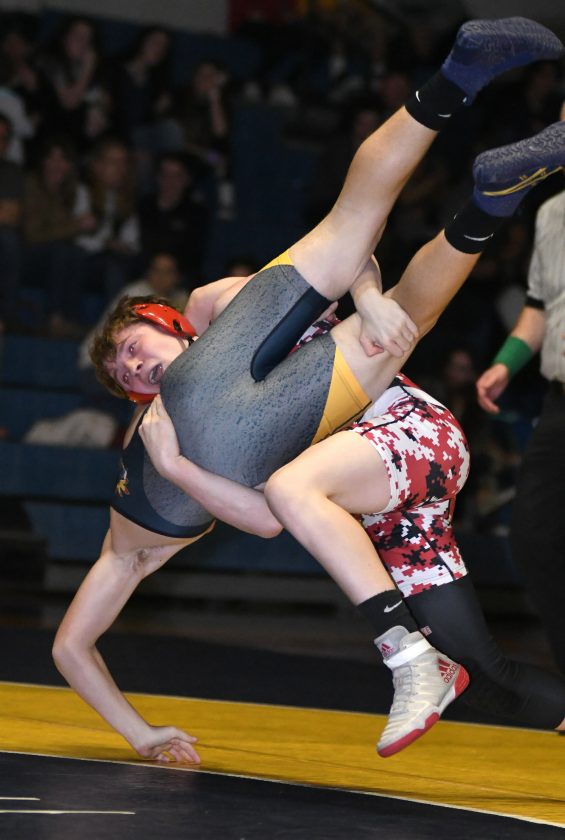 And Dinges was the one who got his team rolling. The same wrestler who lost 45 matches over the last two seasons and has never advanced out of the sectional tournament wrestled like the seasoned veteran he is. Everything he did on the mat last night emanated confidence.

Starting the second period down 4-2, Dinges hit a five-point move early in the first 15 seconds and nearly got the fall. And when he held a two-point lead midway through the third period, he caught Taylor’s attempt at a headlock and turned it into his own takedown and rode out the period on top to win, 10-6.

“I think rolling around with Cael and Cory gets you a lot more confident,” Dinges said. “They’re beating on me every day, so I just start trying moves that I normally wouldn’t try because what’s the worst that can happen? They take me down? I’ve learned a lot of new moves from them and it’s helping me.”

“That definitely set a tone in the match,” Crebs said. “Late in the match like that it takes the pressure off other kids and they can go out and wrestle their matches and not worry about having to go out and get falls and go big.”

Crebs was maybe the biggest beneficiary of Dinges’ win. His matchup with Ward was maybe the most anticipated bout of the dual. Two former state qualifiers are both ranked in the Top 8 in the state and both have picked up eye-opening wins. But Crebs owned the bout quickly.

He scored an early takedown against Ward then went to work on top for the next two periods. He closed the second period with a strong half-nelson to turn Ward for three back points. Ward, who looks as if he’s chiseled from granite, fought the half-nelson so hard that Crebs’ forearm seized on him after the period was over. He was forced to take injury time to get rid of the cramp. But it was worth it for a 5-0 lead after one period.

Crebs added an escape and a takedown in the third for for an 8-0 win.

“My hand was touching the mat with that half and he wasn’t moving,” Crebs said. “He has incredible strength. He’s a big kid and powerful, so I didn’t want to hang out on my feet with him. And top is my best position, so it felt good getting out quickly and getting on top.”

“I thought it was pretty dominant,” Yonkin said. “One of the things we talked about were his mat returns were a big difference in the match. The fact that he was able to return him back to the mat as aggressively as he was didn’t allow Ward to get anything going.”

Canton coach Lyle Wesneski left the dual having seen exactly what he wanted to see from his young group. He knew the whole dual was going to be a litmus test for his young lineup which featured five freshmen and two sophomores.

He saw the areas his kids needed to work on, but also left happy with watching freshman Hayden Ward sink a deep half-nelson to pin 13th-ranked Broc Lutz in a key bout at 132. Senior Trevor Williams gave Canton a good start when he bumped up to 285 pounds and opened with a fall over Lane Stutzman.

And even though Storch lost by a point at 182 pounds, it was the kind of positive performance which should have built some confidence into the senior.

“The young kids are starting to come around and get through those early-season blues and getting over the shock of being on varsity,” Wesneski said. “Now, they’re not freshmen anymore in my eyes. They’ve got 25 matches under their belt. We’re getting into the crunch time of the season. District duals are three weeks away. They’re stepping up and starting to peak at the right time and I’m excited to see what they can do.”

A year which offered so much promise turned so dark this past spring. Hughesville baseball felt like it was ...