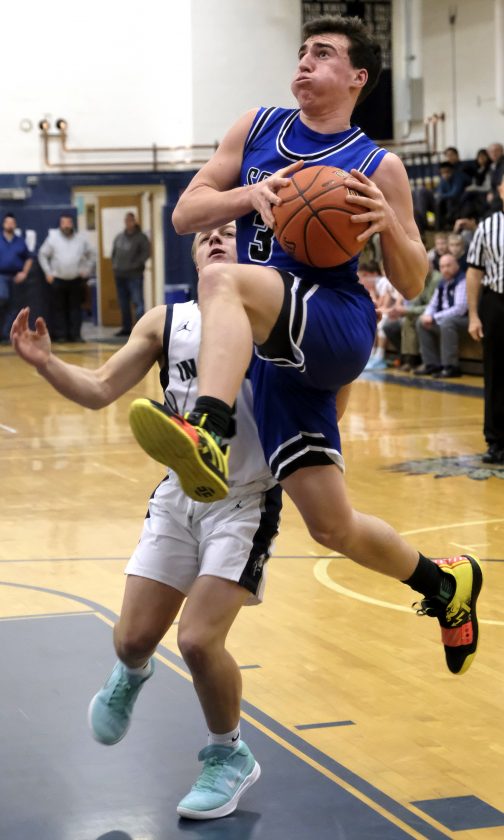 MUNCY — Ethan and Evan Laudenslager had a hand in all 16 first-quarter points South Williamsport scored Monday. The brothers again showed how they share a special basketball bond.

And now the entire team is forming a strong bond. The Laudenslagers set the tone, their teammates joined in and South played one of its best games as it routed Muncy, 60-34, and took a big step toward earning a District 4 Class AA playoff berth. Both Laudenslagers scored 15 points, combined for 11 rebounds and eight assists as South (5-9) won its second consecutive game.

The Mounties entered eighth in the district standings with Muncy at No. 7 and the top eight teams advance. If South does qualify, the Laudenslager brotherly tandem coming up big last night could be looked back at as a turning point.

“We have a little connection out there. It’s fun to play with him,” Ethan said after grabbing six rebounds and dealing five assists. “This was probably his best game. He started out strong and he did a lot of good things. He battled and played good defense and was strong inside.”

“We knew Evan could do that. It’s just trying to get his confidence up. (Monday) he got going which is good to see,” South coach Rob Houseknecht said. “We’re going to need him to score, we need the balance and he can do that.”

Ethan has been the team’s go-to player all season and is the lone starter back from last year’s district semifinalist. He leads South in most statistical categories and having his brother, as well as his younger teammates, settling in, is making South especially dangerous moving forward. Landon Sanford scored 11 points, Lee Habalar 10 and Ben Manning nine as South outscored Muncy, 38-10, in the middle quarters and took a 34-point lead into the fourth.

The Mounties led 16-10 after a quarter before breaking things open in the second. South executed well on both ends, made 9 of 11 shots and had four players score while building a 20-point lead. South did not slow down in the third with different players heating up at different times. Manning’s 3-pointer put South up 52-20 five minutes into the quarter and South capped a blistering 13-minute phase in which South made 15 of 20 shots. Sanford scored eight points during the second-quarter blitz and South effiicently moved the ball, setting up open shooters and finishing with 18 assists on 24 field goals.

“Give them credit. They did their job,” Muncy coach Jason Gresh said. “They did a nice job attacking the basket. (Ethan) Laudenslager is tough. He’s a strong kid and he played well. The other kids fit together well. It’s a nice, balanced team.”

Like South, Muncy is one of the area’s youngest teams and plays mostly underclassmen. South played strong defense and when Muncy (5-7) did have open looks, it struggled finishing, shooting just 28 percent from the field. Freshmen Elijah Weikle (eight points) and Ross Eyer (seven) led the team in scoring, but 12 of their 15 points came well after the outcome was decided.

Muncy likely has a bright future, but growing pains are part of that upward journey right now.

“When you look at the shot chart, the shots are there,” Gresh said. “We just have got to put the ball in the hoop.”

That was not a problem for South as all five starters produced at least nine points. Ethan Laudenslager has carried South at times this year and adjusting after starting alongside four seniors a year ago has not been easy. Still, the captain has grown into his role. He is stuffing the stat sheet on a consistent basis and also pushing whatever buttons he can to motivate his teammates into making this year a memorable one.

“I like helping the guys out and giving them passes. I like how they look up to me,” Laudenslager said. “I try to lead verbally. Sometimes I don’t say the nicest things to them but they understand I’m just looking out for them and doing the best for them. It helps the team in the long run.”

And as well as the offense executed, the defense might have performed even better. The Mounties switched into a zone early in the game and hounded Muncy throughout the game. South forced six second-quarter turnovers and allowed just four field goals in the middle quarters when it took control and showed how dangerous it be in the coming weeks.

“If they play 32 minutes that sound defensviely and offensively I think we’re a team to be reckon with,” Houseknecht said. “We want to play like this the next eight games and hopefully it will carry us into a playoff spot.”