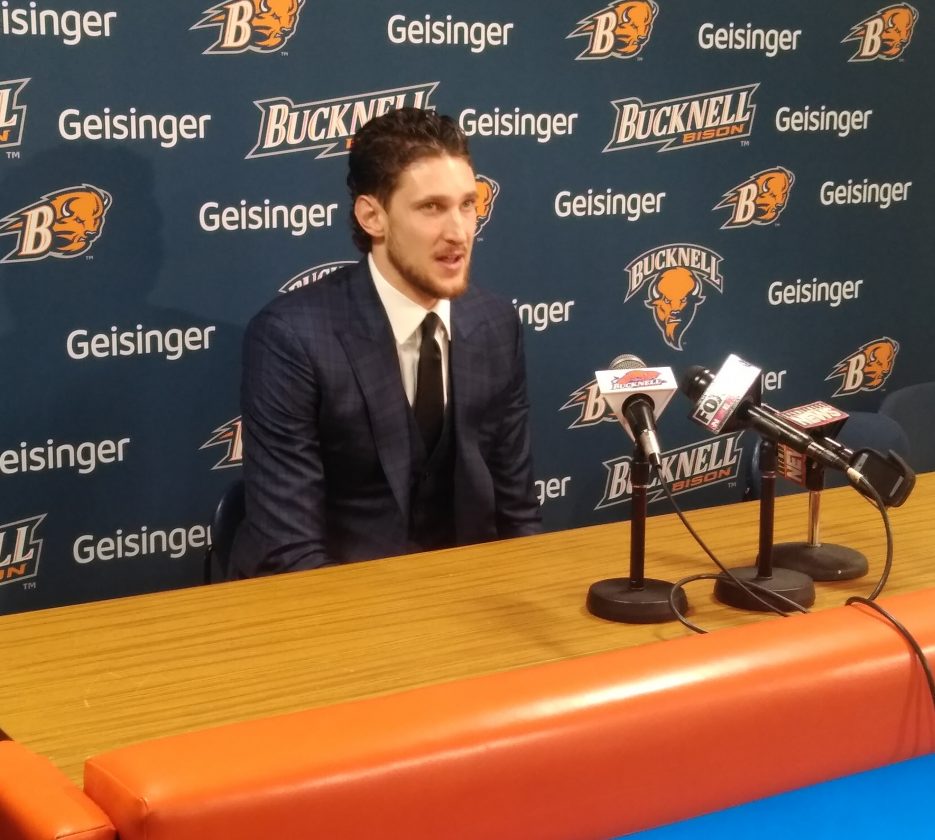 JON GERARDI/Sun-Gazette Bucknell great Mike Muscala speaks with reporters in a press conference at halftime of Saturday’s game against American. Muscala had his No. 31 jersey retired Saturday.

It’s been awhile since Mike Muscala stepped foot on the court at Sojka Pavilion, where he became one of Bucknell’s greatest players. Saturday was the first time he was on the court since he cut down the nets in a Patriot League championship win against Lafayette in 2013 to send the Bison to the NCAA Tournament.

But instead of wearing the Bucknell blue and orange, he was wearing the type of well-tailored suit you’d expect from someone who’s an NBA veteran as he had his name called and walked to center court among the cheers of thousands in attendance.

Muscala came back to where he became a star Saturday to see his jersey retired at halftime of Bucknell’s game against American. And it was a moment that didn’t truly sink the current Oklahoma City Thunder player immediately afterward.

“It was surreal. It feels surreal coming back here and watching these guys play, you know? Seems like a long time ago. When they started playing that video, I got a little emotional,” Muscala said.

Prior to the official unveiling, Bucknell played a tribute video for Muscala that he watched as he stood alongside his parents. That’s when the university instructed fans to view the video board to see Al Leslie remove the orange sheet over Muscala’s jersey. It was a fitting unveiling. Muscala became just the third men’s player to have his jersey retired, joining Hal Danzig and Leslie.

“I was thrilled. I was super honored. To share this experience with family here and former teammates, everyone, so many people I have fond memories of in those four years,” Muscala said.

Muscala’s smile was at times nearly as wide as his wingspan as he watched the unveiling take place.

Saturday was a time for reflection to look back at not just his playing career, but his time in Lewisburg.

“Coming here to Bucknell changed my life for sure. It just opened so many doors for me and it taught me so much, so many things. The people I met here, the teammates that I played with, those guys are like brothers to me,” Muscala said. “To have some of them here today has been cool. To relieve some of those memories has been awesome. I owe so much to Bucknell and I’m so grateful for having the chance to go here.”

Muscala spent time walking around campus and walking through the halls of Sojka Pavilion where he was a player at the start of the decade. When the tribute video played though, that’s when Muscala got some goosebumps and chills being back.

“I keep saying it, but it’s surreal because it doesn’t feel real,” Muscala said. “It’s just good to be back.”

As to Muscala’s fondest memories of being a Bison?

“Lot of good memories on this court and watching the game today just brings all those back,” Muscala said. “Playing in the NCAA Tournament was always a dream of mine and we made that happen twice here. Storming the court, I always wanted to do that. … Those are fond memories that stand out.”

Muscala’s career at Bucknell needs no embellishing. He stands at the top of the list of greats to play for the Bison and is the only Bucknell player to ever get to the NBA.

He was the 2011 and 2013 Patriot League Player of the Year and is the program’s all-time leading scorer, passing Leslie – the man who unveiled his jersey Saturday afternoon. Muscala became Bucknell’s first 2,000 point scorer (2,036) and ranks second in school history with 1,093 rebounds. He also was the first Patriot League player to ever have 2,000 points and 1,000 rebounds.

He was drafted by the Dallas Mavericks in the 2013 NBA Draft with the 44th selection before eventually being traded later in the night to Atlanta.

In the NBA, Muscala’s bounced around. He’s played for the Atlanta Hawks, Philadelphia 76ers, had a brief stint with the Los Angeles Lakers and LeBron James before ending up in Oklahoma City.

“It’s a dream come true for me, for sure (to play in the NBA). It’s been a lot of ups and downs and the game of basketball has given me so much in life. That’s really what I feel to this day most fortunate for,” Muscala said. “I wouldn’t be here if it wasn’t for basketball. I had a lot of those thoughts going through my mind leading up to this weekend where basketball has taken me.”

Muscala first found out about having his jersey retired a few months prior when coach Nathan Davis called him to inform him.

Muscala’s focus as to what’s next for him is just to finish out the remainder of the NBA season strong, as the league is currently on its All-Star break.

Before leaving Saturday’s brief press conference at halftime of the game against American, Muscala did take a moment to mention what he learned most about himself while he was in Lewisburg for four years as a Bison star. And it was how the student-athlete experience at Bucknell was the best it could be.

Boys soccer best of 2010s: A look at the best boys soccer games of the decade

EDITOR’S NOTE: This is the first part of a five-part series revealing the best boys soccer games of the 2010s. ...