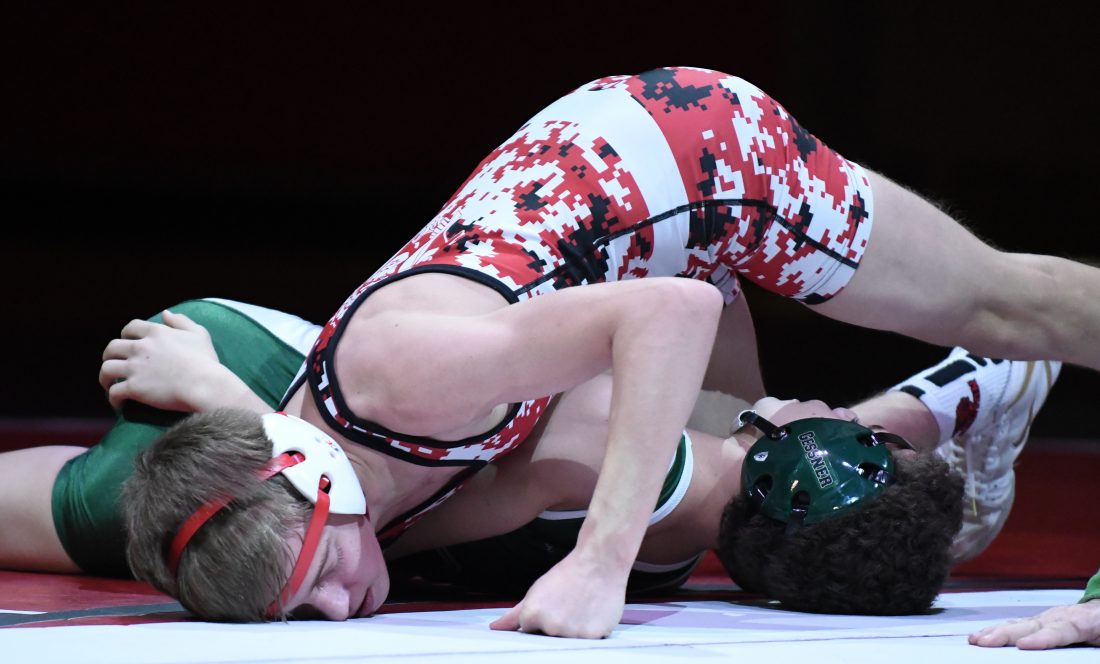 MARK NANCE/Sun-Gazette Canton’s Isaac Landis, above, wrestles a bout at 106 against Lewisburg’s Jace Gessner during a match in January this year.

But having twice already lost to Troy’s Seth Seymour, Wesneski asked Landis to change his tactics and make sure he got the first takedown. So Landis did. And then he got the second takedown, too.

It set in after that second one that Landis could exact a little revenge and beat Seymour for the first time in three matchups this season. From there out, the junior made sure to stay in good position and not give up anything big on his way to a 7-4 victory and a North Section 106-pound championship.

Landis has come a long way since a freshman season where he barely cracked 90 pounds on the scale and was out-muscled at nearly every turn of the season. Now he’s a sectional champion and he enters Friday’s District 4 Class AA tournament at Williamsport as the No. 2 seed in a loaded 106-pound field.

“I think normally I like to lay back and be more defensive than offensive,” Landis said. “I knew this time I couldn’t do that with him, he would have ended up taking me down if I didn’t get after it. It really helped me out.”

Wesneski has tried to stress on Landis over the last couple weeks his defensive style won’t work out too well in the postseason. Aggression is going to be key in a weight class where multiple state-ranked wrestlers aren’t going to make it to even regionals, let alone the state tournament.

So last week was the start of that transformation. After reaching the North Section final with back-to-back falls, including one over No. 2 seed Roger Learn of North Penn-Liberty, Landis kept that aggression in the final.

He didn’t wait for the attacks to come to him so he could counter. Instead, he brought the attacks. More importantly, he finished those attacks.

“You could see it in his eyes, the confidence. He went out and executed and that’s what can happen,” Wesneski said. “Nobody wins a district title being straight defensive. You have to score points. If you want to get to Hershey and meet your goals, you have to score points. He has to continue to score in bunches. He’s put in the work, now it’s time to go do it.”

The one advantage Landis has over the rest of the field is experience. Of the 12 106-pound district qualifiers, eight of them are freshmen. Only Seymour, Line Mountain’s Aidan Kritzer and South Williamsport’s Bobby Gardner are sophomores.

Landis is a junior. He’s been waiting his entire career for this season. As a freshman he was barely 90 pounds. Last year he was still only about 102 pounds, but still managed to reach the district tournament. This season, he came into the season at about 118 pounds.

Landis knew he was going to have to make the cut to the 106-pound weight class, so he did it gradually as the season approached, and when the 2-pound growth allowance kicked in on Christmas Day, he could get to the 108 pounds he needed to.

Now he’s a full 106-pounder with the benefit of both experience and strength in a weight class where the former is often lacking and the latter is hit or miss. It should be no surprise that with three more wins this season, Landis would match his total from his freshman and sophomore seasons combined.

His record, in and of itself, is a bit deceiving. He comes into districts this weekend with a 26-12 record, but of those 12 losses, seven have come to other wrestlers in this 106-pound field. Another came to Warrior Run’s Kaden Majcher when Landis was wrestling at 113 pounds to start the season. There was another to Benton’s Chase Burke, who was a top-15-ranked 106-pounder before being beaten out for a postseason spot. There was also one to Tunkhannock’s Owen Woods, who will likely be in Williamsport next week for the Northeast Regional. And for good measure there was one to Virginia state qualifier Brian Nguyen.

“That’s why we schedule the way we go. I try to get them on the best kid we can get him on,” Wesneski said. “So what we’re going to see at districts, we’ve been doing this every week. A tough tournament is nothing new for us.”

Landis could feel the difference in having the size to better compete at 106 pounds right away this season, even when we he was competing up a weight class while he waited to make his descent. Mat returns were easier. He’s always been solid in the top position, but he feels like he can really control a match from that position now.

It’s a far cry from the last two years where he said he was probably in only about half the matches he wrestled. The biggest difference he’s noticed is his ability to get out from the bottom. When he was lighter, it was easy for his opponents to chop and arm and pin him to the mat. No he’s got the strength to get to his feet and fight through the best mat returns opponents can throw at him.

All of that is what Landis is hoping adds up to another weekend of wrestling after this one. But he isn’t focused on the big picture of making regionals or even the state tournament. Instead, he’s focused on his quarterfinal Friday night against either state-ranked Ethan Kolb of Benton or Brady Moyer of Columbia-Montour Vo-Tech.

“If I can win that first match, it guarantees me Top 6 and I can just take it from there,” Landis said. “It’s definitely exciting to be in a weight class as good as this. But my main focus is just that first match.”

“I believe he can win. If he gets hot, he can beat any of those guys,” Wesneski said. “This time of year the goal is to stay healthy and survive and advance. Each week is a new chapter. So survive and advance and see what happens.”

Mitch Rupert on sports: PIAA offered glimmer of hope as long as it could 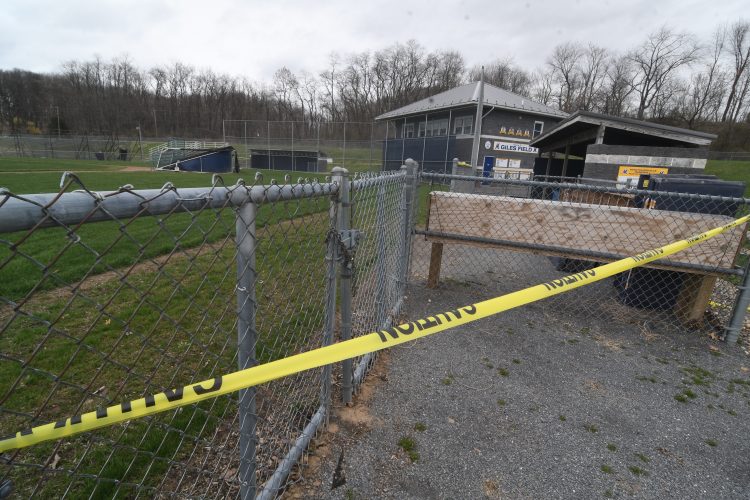 Loyalsock will never know if it would have captured a Class AAA state championship this year. The Lancers do know ...

Area coaches would have loved gathering their teams the last few weeks, explaining the ongoing issues holding up ...