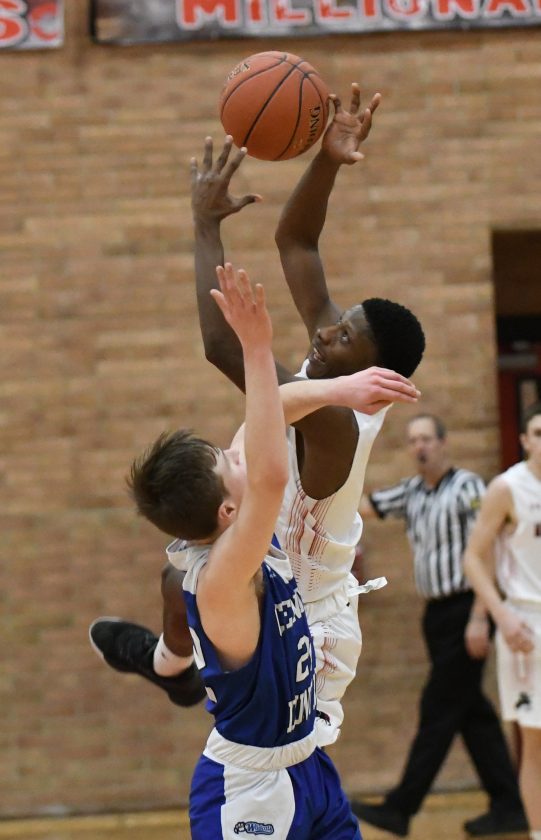 Ahmir Ellzy attempted no shots Tuesday night against Central Mountain. And yet, among all the Millionaires who starred throughout an outstanding collective performance, Ellzy might have shined brightest.

Ellzy put on a passing clinic, carving up the Wildcat defense and dealing 10 assists in 10 minutes. Ellzy set the tone for a Williamsport effort which was as unselfish as it was terrific. The Millionaires finished with 30 assists on 41 field goals and four players scored in double figures as they routed Central Mountain, 90-48, and continued a late-season surge.

Cole Johnson scored a team-high 16 points, Conner Nyman produced a career-high 14 points off the bench and James Evans-McQuay added 12 points as Williamsport (8-13) won for the second time in two nights. Ellzy returned after missing the last two games with an injury and was brilliant, helping the Millionaires put the game away early in the third quarter when he delivered five assists in 2 minutes, 20 seconds.

“Instead of me scoring (Tuesday) I just wanted to get my teammates involved. I love doing that,” Ellzy said. “Seeing other teammates score is as good as me scoring. I don’t really care about scoring. As long as my teammates are scoring and we’re winning that is all that matters to me.”

Williamsport is starting to do more of that and a team that opened the season inexperienced and raw is coming on strong. The chemistry Williamsport is building was evident all night as it controlled the game from start to finish and players consistently made the extra pass which set up teammates for high-percentage shots. Williamsport made more than 50% of its shots in all four quarters, finished at 60.3 percent, led 41-24 at halftime and blew things open in the third quarter when it went up by 30.

Ellzy averages nearly 11 points per game, but excelled at facilitating things last night and piled up assists in quick bursts. He repeatedly found Johnson and Evans-McQuay inside, and his rapid assist binge early in the third quarter buried Central Mountain as it fell behind, 64-39.

“The last couple games James scored 20-some points, so he’s getting quite a few touches and he’s getting out and running. Now with James getting out and running and Ahmir getting guys involved that makes us that much more dangerous,” Williamsport coach Allen Taylor said. “We’re getting to that point where we’re starting to share the ball and guys are running consistently and they know they’re going to get the ball. They’re willing to give that effort to get up and down the floor so I was really happy to see the guys sharing the basketball.”

“Once we get on a roll everyone is on the same page,” Ellzy said. “It basically is contagious.”

That passing fever spread throughout the roster and Williamsport shredded the defense in both the halfcourt and transition. Eleven of the 12 players Taylor used produced at least one assist and 11 of the 12 players scored.

Nyman picked up where Ellzy left off in the third quarter and played one of his best high school games. The senior guard scored nine points and added three assists in the third quarter, finishing with five assists. He also drained two 3-pointers and made two steals as Willliamsport took a 77-47 lead into the fourth. Nyman was one of many reserves who made a big impact for a team which is building some quality depth as the postseason nears.

“I was happy to get my teammates involved and we were really moving the ball well,” Nyman said. “The starters give their best energy and the bench comes in and does the same thing when we come in. We just try and give maximum energy the whole game and never let up.”

Williamsport rallied from a 15-point second-quarter deficit to beat Susquehanna Township, 73-70, Monday night and the momentum carried over. The Millionaires turned the ball over just three times over the last 30 minutes and Nassir Jones (10 points, seven rebounds) scored eight quick points as they quickly imposed their will. Kenon Brown (nine points) and Al-Kabeer Jason hit buzzer-beating baskets which capped the first and third quarters, and Evans-McQuay made three steals as all the parts in Williamsport’s arsenal clicked together.

“We talked about not playing for the number, but playing for the name on the front of the jersey and it seems like we’re doing it. We just need to be more consistent in what we’re doing,” Taylor said. “They’re starting to understand their roles. They’re more comfortable in terms of understanding what we’re trying to do offensively and defensively. We still have a way to go, but we have been pretty consistent these last 4-5 games.”

Either way, Williamsport is excited about continuing its upward climb. The Millionaires did not start the season how they hoped, but they could be building toward a strong finish.

“We have one of the worst records going into districts, but we can still compete with the rest of them,” Nyman said. “Our record doesn’t really show how good we are.”