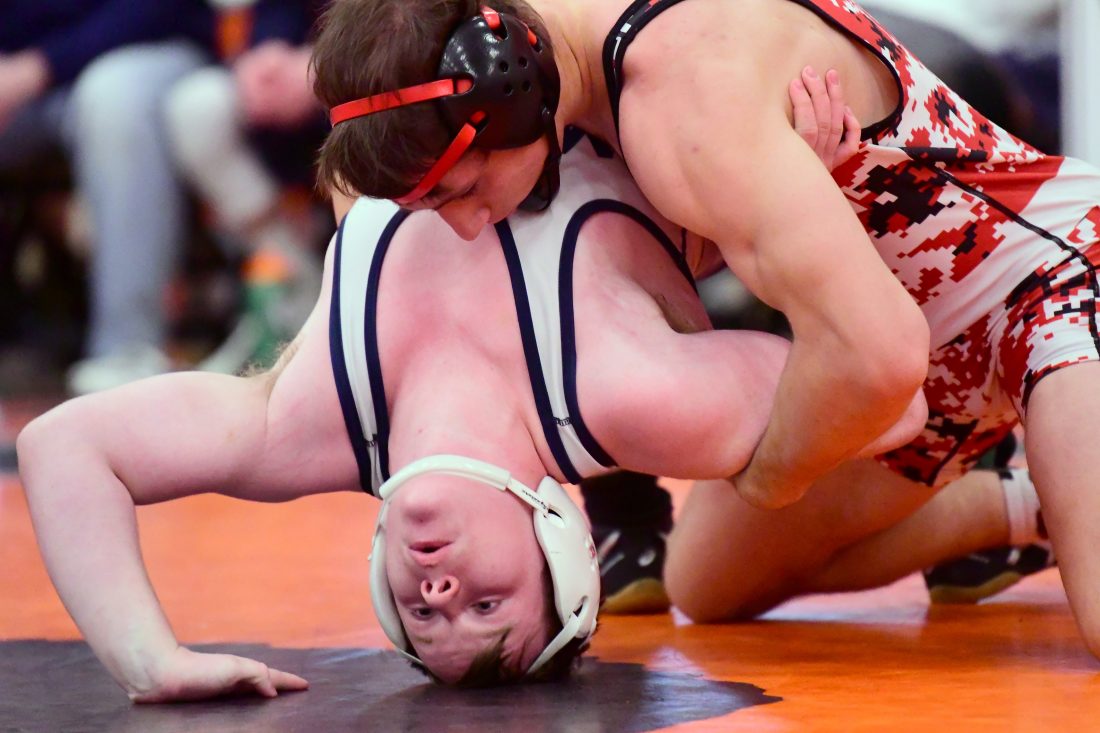 FRANK DIMON/Sun-Gazette Correspondent Canton’s Timmy Ward puts Muncy’s Christian Niemczyk on his back during their 170-pound bout during the consolation semifinals of the District 4 Duals at Milton on Saturday.

MILTON – Lyle Wesneski couldn’t help but look ahead after his Canton wrestling team was eliminated from the District 4 Class AA Duals on Saturday. But not just ahead to the individual postseason in a couple weeks. No, he was looking ahead to next year, and the year after, and so on.

As successful as this dual-meet season was for the Warriors, the eight-year coach sees a future where his team continues to be just as competitive. Maybe even better.

“We graduate five seniors, only two or three that are in the lineup,” Wesneski said. “I have a bunch of kids sitting and waiting who are about dead even with those guys. So we’re not going to fall off at all. And I’ve got a good group of eighth-graders. So we’re going to be around here the next few years.”

Wesneski could see what was coming a year ago. He told the nine kids in his wrestling room to trust what they were doing and know it was going to lead to better things.

Even with as young as team as they had with six freshmen and sophomores holding starting spots, Wesneski made the goals for the Warriors big.

He wanted them to think about winning the Northern Tier League championship. They did just that. He wanted them to finish in the Top 6 of the District 4 Duals, which they did Saturday by advancing to the consolation semifinals before being eliminated by Muncy.

Saturday’s tournament didn’t finish with a trip to this week’s state tournament, but it doesn’t mean Wesneski wasn’t happy. If nothing else, his young group was exposed to a raucous atmosphere at Milton High School which is a solid precursor to the atmosphere at Williamsport for the district and regional tournaments. His kids were exposed to a high level of wrestling in pressure situations, which is only going to make the individual postseason more manageable to navigate. And his kids came away with big wins and great performances.

Garrett Storch’s upset of seventh-ranked Ethan Gush against Muncy gave Canton an opportunity to win the dual. Timmy Ward was leading sixth-ranked Nolan Lear of Benton before a late four-point move by Lear led him to a loss. And Hayden Ward recorded his best win of the season, pinning returning state qualifier Mason Leshock of Line Mountain.

“I’m happy with them. Are we satisfied? No,” Wesneski said. “We’ve things to work on. We saw things (Saturday) that were exposed that we need to work on. They competed hard. They’re a team and they’re tight, and that’s half the battle. Everyone during the dual-meet season contributed for us. That’s big because some kids aren’t going to be able to make it out of sectionals, so being part of team success is big for them.”

The District 4 Class AA Duals bracket was the talk of the tournament following its release last weekend. It’s top-heavy nature with Southern Columbia, Montoursville and Muncy all on one side of the bracket had folks throughout the district clamoring for change.

Come Saturday, it didn’t seem to matter much anymore. Southern Columbia and Montoursville both qualified for the state tournament by finishing first and third. Line Mountain, as the No. 2 seed, finished second, losing to Southern in the final, 53-18.

To ignore the impact the seeding of the tournament – based on teams’ winning percentage – had on its outcome would be to bury your head in the sand. But by no means are either of the three state-qualifying teams unworthy of one of those spots.

“You can talk about the brackets all you want, but the three best teams are going to go as far as I’m concerned,” Wesneski said. “It is what it is.”

There were clearly three layers to the field this year. Southern Columbia, when healthy, was not going to be beat by any District 4 team this season. Well, Saturday they were healthy and nobody threatened to beat them. Montoursville was the only unbeaten team in the district coming into the tournament and was the consensus second-best team. Then you could throw a blanket over everyone else for that third spot.

Muncy had regular-season wins over Benton and Line Mountain, the latter being Line Mountain’s only loss until the district final. Benton had been wrestling as well as anybody in the tournament in recent weeks and gave Montoursville fits two weeks ago at the Clearfield Duals. Canton’s only loss was to Montoursville and it went unbeaten in NTL duals.

The reality is no seeding system is going to be perfect. But to not think it could be better than what is currently available would be faulty.

YOU GET AN UPSET,

YOU GET AN UPSET

How competitive were this year’s District 4 Class AA Duals? Consider that eight state-ranked wrestlers in the field lost to wrestlers who were either ranked lower than themselves, or not ranked at all.

Two wrestlers who were ranked No. 1 in the state lost. Southern Columbia’s top-ranked Tyler Waltman dropped a 2-0 decision to Montoursville’s fifth-ranked Dylan Bennett at 182 pounds. And Montoursville’s top-ranked 106-pounder Branden Wentzel bumped up a weight class and lost, 4-0, to seventh-ranked 113-pounder Scott Johnson of Muncy.

Let’s be honest, upsets are what make things really fun. And the best part is in two weeks, we get to see some of the matchups which didn’t materialize Saturday come to fruition.

Mitch Rupert cover wrestling for the Sun-Gazette and can be reached at 326-1551, ext. 3129, or by email at mrupert@sungazette.com. Follow him on Twitter at @Mitch_Rupert.