Hartman, Miller can’t quite ignite Bucknell in loss to Lehigh 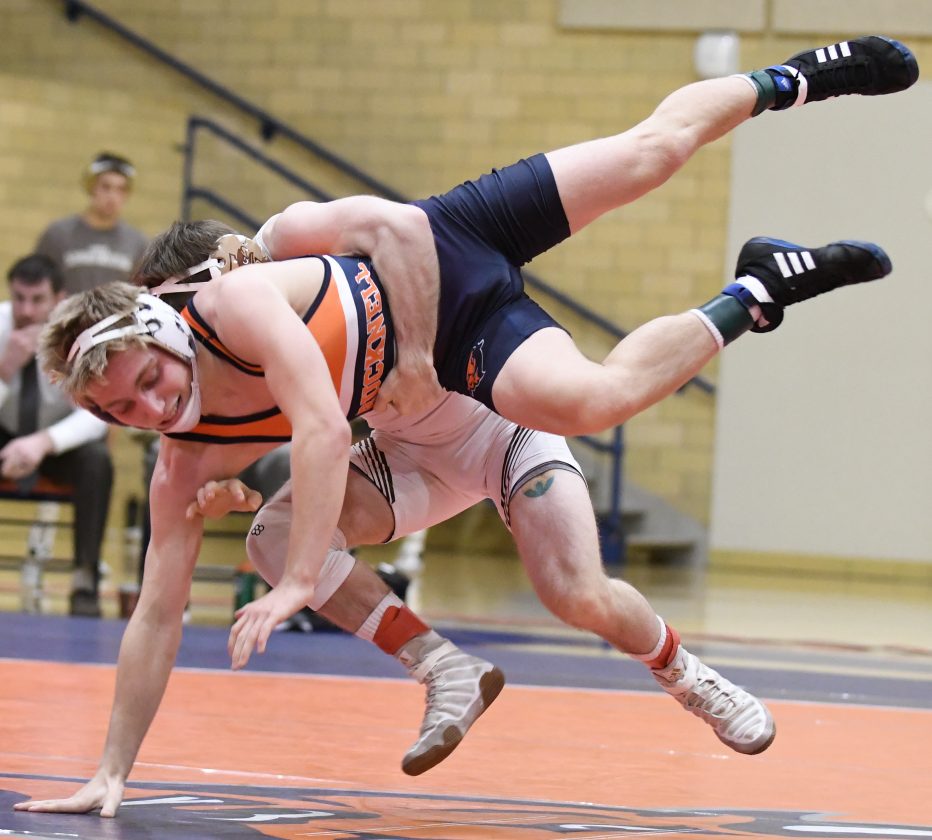 MARK NANCE/Sun-Gazette Bucknell's Darren Miller is thrown to the mat by Lehigh's Nick Farro in the 133 pound bout during their match at Bucknell University Friday.

LEWISBURG – Taking a glance at the scoreboard and seeing an 2-0 score in favor of Lehigh, Bucknell’s No. 14th-ranked 165-pounder Zach Hartman never panicked. The Bison wrestler chose down, got an escape and a takedown with a little over a minute left to gain a 3-2 lead over Lehigh’s Brian Meyer. Another glance at the scoreboard once Meyer worked to his feet, Hartman ignited the crowd returning Brian Meyer back to the mat to hang on for a 3-2 win.

Hartman and sophomore Darren Miller used big third-period efforts to give the Bison six team points, but it was all Bucknell could gain in a dual against No. 11 Lehigh in a 32-6 Mountain Hawk win inside Davis Gym.

The Mountain Hawks outworked the Bison in the first period securing the first takedown in eight of the 10 bouts and made it difficult for Bucknell to wrestle from behind.

“That was a point of emphasis. We need to do better at getting out to a better start, faster starts and just being ready to go when we step on the line,” Bucknell coach Dan Wirnsberger said. “It becomes more critical in a match like (Friday) when we are up against a Lehigh team that has ranked guys in the lineup. Those first three minutes are so critical in deciding the flow of the match.”

Despite wrestling from behind every Bison wrestler kept pressing forward to look for an opening to get back into the match. Brandon Seidman gave up two quick takedowns to Lehigh’s Brandon Paetzell, but battled back in the second and third periods even getting a takedown of his one in the second period before falling 9-4. Miller came back from a 2-1 first period deficit for a gutsy 6-4 win at 133-pounds.

“We just have to keep wrestling at that point,” Miller said about giving up the first takedown. “I just had to keep working to tire (Nick Farro) out to the point where I could get to my attacks and finish. I know my conditioning is good so I had that in the back of my head that I was still feeling good in the third period.”

Lehigh won from 141 to 157 pounds to take a 13-3 match lead into the five-bout intermission. Dan Moran worked for four takedowns to post a 10-5 decision at 149, Jimmy Hoffman held a 3-1 lead going into the third period before Matt Kolonia tried for a double, but Hoffman countered and got four back points before the horn for a 10-1 major decision. The Bison’s freshman 157-pounder Jaden Fisher went toe-to-toe with eighth-ranked Josh Humphreys, but fell behind early in a 3-1 match going into the third period before Humphreys pulled away for a 9-3 decision.

“We have a couple really young guys that wrestle well and have the endurance late in matches and it seems that they get better as the match progresses so that is why we try to emphasis being prepared in the first period so we can wrestle with a lead and get off to better starts against the top-level guys,” Wirnsberger said.

Hartman sparked life back into the Davis Gym crowd with his takedown in the third period and mat return to hold down Meyer for the win.

“I feel really comfortable especially being in Davis Gym,” Hartman, the Bison’s returning national qualifier said after his win. “It really drives my energy level and being able to go out and wrestle to have fun makes it easier for me to flow and do what I want to do out there. I’ve been wrestling for awhile and knowing that I can wrestle under pressure and in different situations, I feel confident wrestling anywhere in a match and knowing I can find a win.”