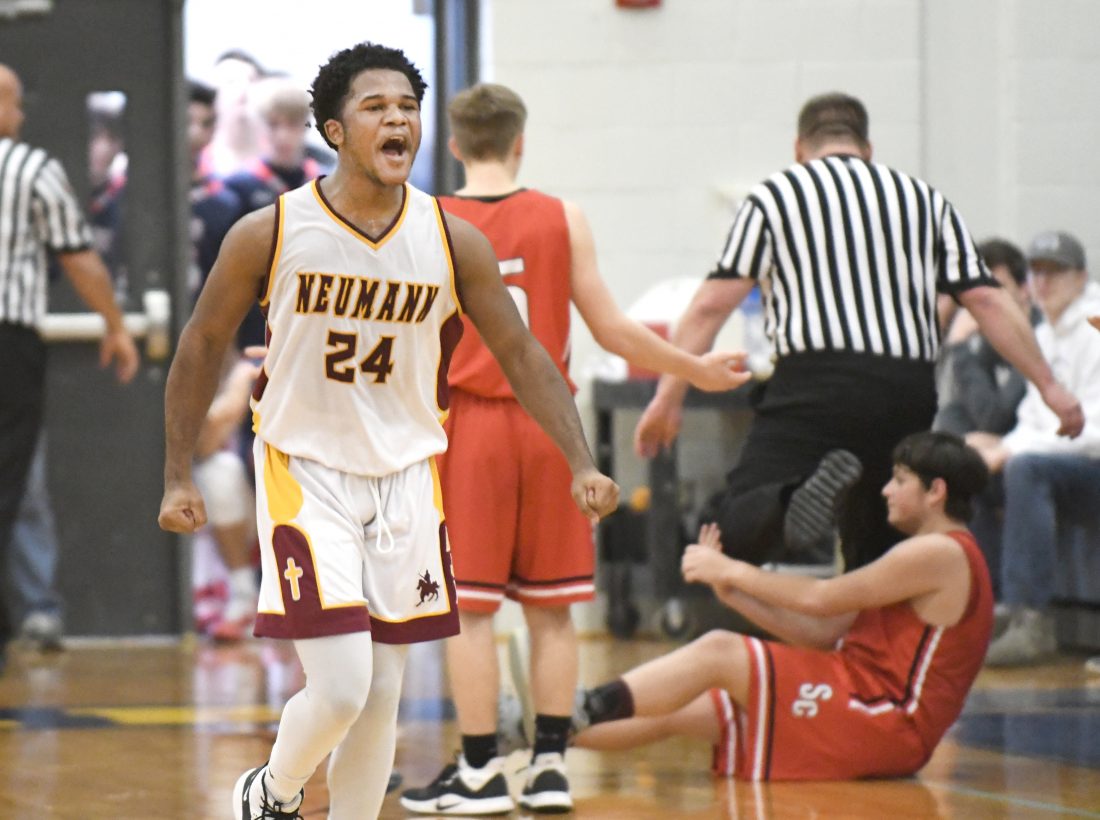 MARK NANCE/Sun-Gazette St. John Neumann’s David Hill celebrates their win over Sullivan County in the District 4 Class A semifinals at Montoursville on Saturday.

Together, the Hills are two dynamic basketball players. But what they did Saturday against Sullivan County revealed their character might be even more impressive than their talent. Playing in a thrilling District 4 Class A semifinal at Montoursville, the Hills simply would not let St. John Neumann lose.

Davion hit the game-winning shot with 6.5 seconds remaining and David scored 10 of his 21 points in the fourth quarter as Neumann edged Sullivan County, 63-61 in the latest playoff thriller these long-time rivals have produced. Davion scored 22 points and David took over in the fourth on a day when many thought he might not even play after missing the previous seven games with an injury.

And, oh, how he did. David made his last five shots in the fourth quarter, helping turn a tie into a 61-55 lead with 91 seconds remaining. He added seven rebounds and two steals, looking like a player who never missed a game. The plan was to play David in four-minute intervals, but once he got going, he felt stronger and stronger.

Neumann (20-4) will play Northumberland Christian in next week’s district final at a time and date to be determined. The Knights had beaten Sullivan County (18-6) last month when David missed his first game, but likely would not have done so without him yesterday. When his team needed a lift, David provided a huge one.

“It was my team keeping me going and the intensity of the game,” David said. “I just bought into it and kept pushing forward.”

“I think a lot of adrenaline took over when he got out there and he’s another one of those refuse to lose guys. He wants to be on the floor whenever he possibly can,” Neumann coach Joe Clark said. “We kept asking him how he was doing and he said, ‘I’m great, Coach.'”

Neumann appeared in great shape when Hills putback gave it a 61-55 lead. Instead, Sullivan County stormed back and tied it at the 19-second mark when Justin Metzger (21 points) sank a 3-pointer. That set the stage for the younger Hill to shine on a big stage and in front of a huge crowd that created an outstanding high school atmosphere.

Following a timeout, Davion dribbled at the top of key and looked for his opportunity. When it came, the freshman pounced. Davion blew past a defender into the paint, used a pretty spin move and drained the mid-range jumper that put Neumann up, 63-61. Sullivan nearly tied it on the game’s final possession, but a close-range shot was blocked as time expired.

“Originally, we were trying to set up a play, but to me the time looked like it was going fast so I just had to make a quick decision. I had confidence in my shot, so I went and took it,” Davion said. “You definitely do live for a moment like that. It’s very exciting, especially when you make it.”

Sullivan County will play North Penn-Liberty in the third-place game and is state tournament-bound for a third straight year. The Griffins produced plenty of excitement as well in a wildly entertaining game which featured 15 lead changes in the middle quarters. Sullivan County led by as many as five in the first half before Neumann pulled within two at halftime and forced a tie entering the fourth quarter.

“This team prepared extremely well the last couple days. They were loose and confident and we felt like this was a game if we played well we were going to win,” Sullivan County coach Glenn Vaughan said. “My team has too much heart. I love this team. I love their effort.”

Jalen Thomas (15 points) played excellent defense and Sullivan County made 14 of 26 shots in the middle quarters. Williams played one of his best high school games and repeatedly either scored, drew fouls or opened up the perimeter for his teammates throughout the second half. He was 4 of 6 from the field and finished just a rebound shy of recording another double-double.

“Jesse was super motivated coming into this game and he played very well,” Vaughan said. “He took care of the ball, he made smart plays and at the end of the game when we needed shots around the rim we punched the ball inside and he did a great job sealing and getting great opportunities to keep us in that game.”

Davion settled in after the first quarter and scored nine second-quarter points as Neumann started chipping away. He added 11 more in the third quarter as the lead changed hands nine times and added eight rebounds and three assists. David scored the fourth-quarter’s first four points, produced eight of Neumann’s first 10 and the Knights never trailed again.

“Glenn always has that team ready to go,” Clark said. “In this evinroment, playing to get to the district finals, we knew it was going to be a war and I’m just happy the kids responded.”